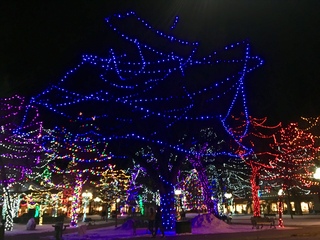 Pulling my wheeled duffel through snow and ice, I walked from the Santa Fe Downtown Depot to my hotel. After settling in, I walked to the SF location of my food co-op to get provender for the next four days. On my way back to the hotel, my paper bag broke, spilling all my carefully selected groceries onto the sidewalk. What to do? A man who appeared to be living in his car came to my rescue, somewhat reluctantly at first. I had walked into an upscale condo complex where he was dumping a trash bag. Maybe when I first came up to him, he thought I was a resident who would chastize him for using their dumpster. On the contrary, I thought he was a resident and asked if he might have a plastic bag I could use. He said he'd look, and when he opened his hatchback and rummaged in the back, I realized he didn't live in the complex. Somewhat grumpily, he came up with a large, resuable bag. His attitude changed when I handed him a couple of bucks for the bag. We both expressed our thankfulness.

Back at the hotel, I began my wait for Recording Day #1. I had chosen the hotel based on the location of a studio my producer sometimes uses, which would have been an easy walk for me. But Chris had decided to use his home studio, so I would be employing Lyft for the next few days. Most of my Lyft drivers turned out to be unusually interesting and also interested in what I was doing in The City Different, as Santa Fe likes to call itself. More about that in the next blog installment.

I'd talked with Chris on the phone a couple of times, and I naturally imagine what someone I'm listening to looks like. His deep voice created a picture in my mind of a stocky 40-something guy with thick dark hair and a 5-o'clock shadow. Nope. He was tall and thin with blond-brown hair down to the middle of his back and clean-shaven. When we entered the studio, I saw right away that he is a musician; eleven guitars were lined up on a long rack and a trumpet mouthpiece lay on the table laden with recording equipment. We ended up talking about his work, how he'd decided in middle school (so rare in my considerable experience with middle school students) that he passionately wanted to succeed as a musician; how he has diversified by playing a variety of musical genres in a variety of venues, repairing musical instruments, and recording himself, other musicians, and audiobooks.

As I read my book into the microphone, I would realize for the first time what a large role music plays in my story, so it was natural that during breaks in the recording, Chris and I talked a lot about music and told each other stories about how music was part of our respective lives in small-town and rural New Mexico. I easily and quickly slipped into complete confidence in Chris's professionalism and his integrity. At the same time that he clearly had full command of the process, his bearing was entirely laidback. I felt I had landed in a pair of competent hands.

Despite how relaxed I felt on one level, when all the equipment was set up and I began reading, I quickly knew how demanding the task was. My mouth dried out in what seemed like seconds, and my concentration had to be razor sharp. In our first session, because of set-up time, we only recorded for an hour and a half and then took the two-hour break we'd planned on. I took Lyft back to my hotel and ate a cold lunch (the room had a fridge but no microwave) and returned to Chris's home at 2 pm for another two hours of recording. The going was even slower than anticipated; when I practiced at home and timed myself, I read about 35 pages per hour rather than the 40 pages Chris had said was average. But in the studio, with breaks between chapters and repeats when I made mistakes, we ended up with more like 25 pages per hour. So we agreed to start earlier and take a shorter break the next day to give ourselves  five hours of recording time.

I was so fortunate that evening to get to spend a most enjoyable dinner with friends from Grand Rapids. I'd met Linda and Scott on my last Michigan tour. Serendipitously when he was on the Calvin College campus, my nephew Noah saw a student reading my book and discovered that it was being used in the gender studies seminar that Linda was teaching. I emailed her right away to express how pleased I was. Until then, making any inroads into my alma mater had proven impossible, except that the college bookstore carried the book. Linda responded to my email by suggesting that we meet for drinks so I could hear about some student responses. We ended up having a lively conversation about plenty of other topics. Scott and Linda have a home in Taos and were going to be in Santa Fe the same time I was, so it was easy to get together, bringing a dollop of pleasure into my otherwise arduous work schedule. After dinner they walked me back to the hotel, capping off a special evening with the magically lit Plaza.

It was on Saturday, Day 2, that Chris and I hit a rhythm we would follow for that day and the next. The day before, we had just taken breaks between chapters or when he could hear that my mouth had gotten dry. Now we broke after each segment within a chapter. My throat was a bit phlegmy that day, so Chris made me a big mug of green tea with honey, which he said is recommended for clearing the throat when recording. Who knew? When we ended, Chris joined me on the driveway for a cigarette while I waited for my Lyft. "By the way," he said casually as we chatted, "ACX [the site that approves and distributes audiobooks to Audible, iTunes and Amazon] requires a 5-minute promotional reading to be put on the site for your book." Acting as if that were no big deal, I said, "Oh, okay," and we talked a little about what different authors have used for this.

Back at the hotel, I realized I was exhausted and feeling anxious about preparing the promo piece. If I'd known, I would have brought along the heavily redacted copy of Silver Cup that I use for readings, and the prospect would've been simple. The thought, in that state of fatigue, of preparing something afresh was overwhelming. I ate another cold meal and took a long soak. Once in my pajamas, I decided to text Chris to see if we could put off recording the promo until mid-February when I planned to be in Albuquerque and could take a quick Railrunner to Santa Fe to do that last schtick. He graciously agreed, realizing he'd dropped it on me at the last minute.

Sunday morning I ate the hotel buffet breakfast, because I thought the yogurt I'd brought with me might have been responsible for the phlegm the day before. We finished recording the last page, the acknowledgements, at exactly the 5-hour point, and I wrote a check for thirteen and a half hours of recording time. The next block of time would be Chris's–for editing and mixing. I could go home and forget about the whole business for a while. That evening I shared a celebratory dinner with a friend, who came up from Albuquerque. I felt grateful for time with good friends on each end of the recording time. I'd thought I'd spend a little time on the Plaza Monday morning, but all I wanted to do was sit in my room and read until it was time to take the Railrunner down to my connection with Amtrak.

NEXT TIME: MAKING AN AUDIOBOOK: MY DRIVERS

This is quite surprising, I didn't realize how difficult it is to record an audio book. I liked that you had able to allot many days to the project. I will share this.

Thanks, Diane, and thanks for sharing. This isn't even the end of the process!

Anna, It is so interesting reading your experience. I feel as if I am perched near by and along for the ride. Your words make such a multidimensional journey with you. Thanks!

Janet, I'm so happy you've been along with me on this whole journey, including the one we started more than 35 years ago! Thank you!