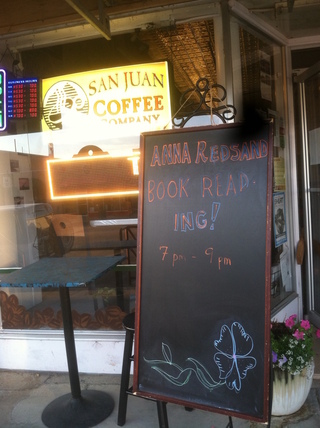 No one else came. It turned out that the folks who helped organize the event had forgotten that a countywide beer fest was in progress. In a town of 8,482, which event do you think will draw the most people? My little audience was wonderfully responsive—offering tears, questions, comments and stories. The nurse who was thinking of sending the book to her former incarcerated patient in North Carolina, clearly needed to be there. My friend Ed bought a book as a gift and though he didn’t tell me who the recipient was, a previous conversation hinted to me that this was also someone who would benefit. And then came a conversation with him that contained a nugget that I needed to hear for an essay I’m working on. The exchange absolutely goes both ways.

I’ve always known that To Drink from the Silver Cup will resonate with a diverse audience, but LGBT audiences are an obvious natural fit. So, despite what I’ve known, I’ve been a bit surprised when some of the most meaningful responses so far have come from non-LGBT folks. The first surprise came from a woman who is the mother of a lesbian, but what had touched her most deeply was not that aspect of her life. As we talked after she’d read the book, her years growing up in a rigid, repressive church that left her void of spiritual connection brought her to tears.

The second surprise came from a man I’d known as an acquaintance, another teacher in a school system where I’d been a counselor. This man, too, had grown up in a fundamentalist home and was encouraged during university to attend a Baptist seminary. For years (now in his seventies), he has been a seeker, trying to come to an understanding of spirituality that he can embrace. The book brought us into a four-hour conversation a few days after the reading, and when I next saw him, he said that he still hadn’t quite finished the book, but he had even more questions.

Last night I walked the alleys of a neighborhood near UNM with my friend Janet. She told me she’d loaned my book to her sister-in-law. When she got the book back in the mail, it contained the first letter she had ever gotten from this family member whom she's known for more than twenty years. A few days later they had a long conversation about the book and things spiritual. I said to Janet, “I think I’m on a mission,” and chuckled.

Janet said, “You are on a mission. People who’ve been denied a spiritual life for whatever reason are so hungry for it. You give them the opportunity to have these healing conversations.” I got chills, and gratitude flowed through me. My greatest desire has been to touch the lives of others with my writing.