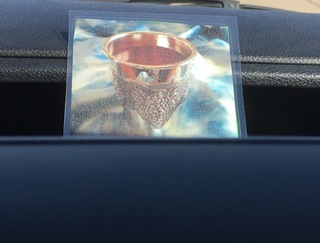 Talisman for the Journey on My Dashboard

I have left Albuquerque, and as I type this, I’ve completed the second leg of my drive to British Columbia. I’m sitting in the shade of an oleander hedge, enjoying the light breeze in 75º sunshine in Kingman, AZ, after starting out in fog and 39º weather in Holbrook, AZ, this morning.

My last two events in Albuquerque were great successes, both in numbers and in conversations. For an English major, I’m not at all bad at math, but I am not good at estimating lengths (beyond a couple of yards), distances, or numbers. Taking a stab at the Book Forum numbers—the joint event with UNM sociology professor Rich Wood—I’d say we had an audience of about 80. Our focus was on the inclusion of people marginalized because of race and/or sexual/gender identity. The conversation was meaty and thought provoking.

Yesterday morning I finished packing up the van, and when I climbed in I felt a sudden deep contentment—a sense of being embraced by a well organized space, knowing where everything was, and having the things I would need first at my fingertips.

My final event took place yesterday afternoon—a reading at Bookworks, the premier indie bookstore in the Q. Here, too, I entertained thoughtful questions that often made me think of new angles to my own work. It was a wonderful send-off.

Immediately after the reading, I walked next door to Flying Star Café and ordered a celebratory vanilla milkshake, in part because I couldn’t bear the thought of trying to put a meal together and get on the road at the same time. The shake I could and did drink while I drove.

I hit a very short spate of heavy rain around Laguna Pueblo. On my right as the rain and dusk fell simultaneously, I noticed that Mount Taylor was topped by snow. I intended to spend the night at the last rest stop in New Mexico, about 23 miles west of Gallup. However, the signage for the exit seemed to say that I was coming up on a combination truck stop-rest area, which I thought couldn't be right, so I inadvertently passed it. I didn’t mind driving on because I’d gotten to Gallup earlier than expected, but overnight parking at rest areas is not allowed in Arizona, so I wasn’t sure what I was going to do. Ninety-five miles later, I was feeling a little sleepy, and the first exit for Holbrook promised a KOA campground. I knew that a tent site would cost about $30—high for camping, low compared to a hotel. And it felt safer than a truck stop, Walmart parking lot, or rest area, so I pulled in. The office was shut up tight, but there was a light over an outdoor desk, a posting of prices for different types of sites, and payment envelopes with a night drop. The campground wasn't lit up, and I had to return once to the map above the desk to reorient myself and find the tent sites. I was warm all night and ridiculously pleased that my duffel stuck out just far enough from under the bed to make a little shelf for my phone and flashlight—voila—a nightstand. I read myself to sleep on the phone, as is my wont.

In the morning I didn’t really want to leave my toasty down comforters, and I refused to begin to make my breakfast in the cold and fog. Thus, I gave thanks for Trader Joe’s organic beef jerky, almonds and dried cherries, telling myself I’d get hot water for tea somewhere on the way and eat my usual breakfast of yogurt, fruit, granola, seeds and nuts for lunch.

My first stop was at the rest area just after Winslow, where the facilities nestle up to a red rock outcrop. I climbed the outcrop, thinking this might be the last time in a long while that I climb red rocks. Upon cresting the hill I was assailed by the powerful sweet and cedarly fragrance of a dew-wet juniper bush.

I stopped in Winona, AZ for hot water, and to my delight, they sold a favorite of mine—Old Fashioned Neapolitan Coconut Bars. I don’t eat sweets much these days, but those are so rarely found, I couldn’t resist. I’m saving it for when I get a craving, which might be about now. It’s a good thing they’re hard to find.

Between Holbrook and Flagstaff, I was struck as I always am by failed human hopes and dreams to establish ourselves in desert country. Structures long abandoned, sometimes beautifully graffitied, spread themselves sporadically across the landscape, and I can’t help thinking how frail we really are.

And now Kingman, arriving much earlier than I expected, in part because I traveled farther than planned last night. I have broken my trip into five-hour days, and I think it’s going to be very doable.

What a wonderful trip journal. Thanks Anna! Feel like I am on the road enjoying the journey.

This is just lovely. I am a little reminded of a favorite childhood book, My Side of the Mountain, I think it was, about a child who went to live in the mountains. There is something especially charming about detailing this matter of eating and sleeping and checking into a campground. But won't it get colder at night now as you head north? Oh, and p.s. I'm sorry I missed your events - forgot - so glad they were so well attended!

So glad to have you with me, Janet.

Thank you, Diane. Oh yes, I know My Side of the Mountain; it's a nice comparison. I'm hoping I'll be. Lose enough to the ocean that it won't be too cold. Also probably getting a heater at some point.

am thoroughly enjoying your journal. I've tried to comment, but I'm not sure I am doing the right thing(s). Will have to check with Bennie James, but don't see much of him lately.
I'm wondering if you are trying to respond every day. I continue to work at my "log", but not worrying about writing well--just "getting the facts, mam'm". It's just a bit beyond a "day timer". I can at least recall some things I may need to recall later: when I saw which dr. and why, etc.
We keep finding others who have or want to read your material. (an interesting verb--same in either present or past tense)
Vel

You are doing fine. I will email you to let you know, because I don't think you get a notice when I've replied to you. I'm not able to write every day. I've been driving 5-6 hours every day. This morning I'm in Mount Vernon, WA, where my mother worked at one time as an RN in the obstetrics dept. I am meeting a Danish friend, who happens to be visiting friends in Bellingham, for lunch. Funny world! And I'm waiting for a call from Cheyenne about an interview she'll have at 12 MST for a position at University of Colorado, Boulder. Say a prayer for her, if you would!