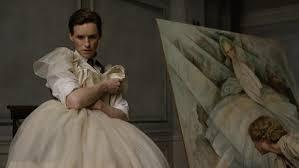 THE DANISH GIRL: A WILLING SUSPENSION OF EXPECTATION
(Spoilers)

I knew when I read The Danish Girl by David Ebershoff that I would also see the movie. If for no other reason, it would be hard to resist scenes of my beloved Copenhagen. I also decided to review the book (see March 5 blog post) before seeing the film. Writing the review before watching the movie changed how I viewed the picture and probably how I will view other film adaptations in the future.

When you’ve read the book version before seeing a flick, it's difficult to not compare the two. If you loved the book, there’s something of an expectation that the movie won’t live up to it and also a tiny hope that it might. In this case, there was the temptation to keep saying to myself or to my cousin and her husband with whom I watched the movie, “That’s not how it was in the book.” Certainly there are many ways in which The Danish Girl as film differs from The Danish Girl as book, but writing the review had caused me to delve deeply into the story, and to my surprise, that gave me a greater appreciation for the why of the filmmakers’ decisions to change some things.

Often the greatest disappointment in the movie version of a book is that there is not time or even a way to be faithful to the richness of written language, and I’m used to making that allowance. Time constraints also seem to have caused the screenwriters to make certain things in this movie more explicit than they were in the book. For example, Lili’s love interest, Henrik is clearly gay in the flick, but his sexual orientation is left more ambiguous in the book.

Some major differences seem to have been written for dramatic effect. Audience expectation requires more drama in a movie; after all, movies, as the descendants of theater, fall by nature into that genre. It seems to be a concession to dramatic effect that there is a much more erotic relationship between Einar and Gerda, who has had the real-life character’s name restored to her in the movie (in the book she is called Greta). One of the gifts of the book is that Greta is so accepting, if bewildered, when Lili appears; in the picture, there are scenes where Gerda expresses outright anger at Lili's presence. She says that she and Einar need to stop what she sees as a game. “Lili doesn’t exist,” she says. Gerda also expresses much more unconcealed anguish over her loss of Einar, and as my cousin’s husband pointed out, that seems more realistic. I, however, had loved Greta’s capacity for generosity.

Nevertheless, in one powerful scene, at the Central Railway Station in Copenhagen, the movie conveys the depth and tenderness of Gerda’s love for Einar. It is a scene of supreme sacrifice on behalf of the beloved, in which Gerda lets Einar go emotionally and physically to become Lili, the woman she really is. It was here that my cousin’s husband, a cradle Catholic, surprised me by saying this was the most profound portrayal of love he’d ever seen.

The book is a portrait of a unique marriage. The movie is a portrait of a slightly different marriage. In part, the depths to which I plumbed the book, helped me draw this conclusion, but the two experiences made me see that, in all cases, a movie version of a book and the book are two different works of art. That may seem obvious, but I believe that it will cause me in future to view film adaptations more on their own merits. In short, I think I will come to a movie of a book I’ve read with a willing suspension of the expectation that the movie mirror the book. Perhaps a movie is more like a painting than a photograph of a written work, taking artistic license in places.

That said, I understood why Einar’s bog in Jutland, the scene he painted again and again, was actually filmed in Norway—portraying the landscape and paintings with trees and mountains. Trees are scarce in the bogland, and mountains are nonexistent in Denmark. The change of scene was clearly made to supply dramatic visual effect. But I thought the filmmakers could have stretched themselves and found a Danish bog scene that was beautiful in its own way. Moreover, it was significant that Einar had chosen to paint that bleakness hundreds of times.