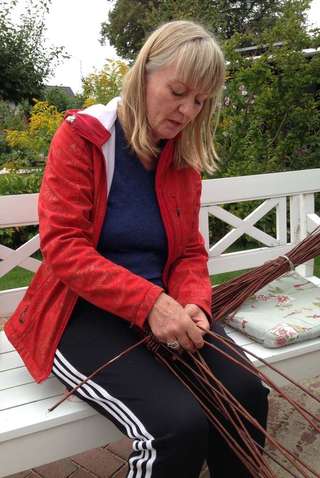 Tina and I sat for a moment and thought quietly about this. Then I asked, “How has marriage affected your spirituality?”

“Being with Rudi gives me a lot of stability. I know who to love. A lot of the confusion from my younger days is gone. And I know where we live. Because I’m very bevægelig (easily shifting). He’s not. That’s helpful. Secure. It’s a big part of sharing or being in a community. Centering my life in family is strong; it makes me take part in being here. I believe we are here; we belong here. It’s good for my core task. I need to be in balance. It’s very helpful.

“Of course it can be disturbing too because I have to cope with someone else’s energy, and he’s very different. As a young person, I thought that I needed someone who nurtured his inner life with a spiritual practice, like Jørgen (Tina’s boyfriend when we lived in the ashram). Rudi does have a rich inner life, but he doesn’t nurture it with meditation and yoga, a virtue that I thought was very important for me in a boyfriend at that time. It turned out that that was nice to have—not need to have.

“Does that mean you have other things you share?”

“Yes. Definitely. And sharing doesn’t have to have anything to do with sharing the same thing. It doesn’t have to be mirroring. Maybe earlier I thought I needed a mirror to tell me who am I because I lacked reflection in my childhood. My mom always said, ‘I don’t understand how I could have a child like you.’”

“So she said that to you as an adult?”

“How did you feel when she said it?”

“I felt okay. It was funny. It explained why she couldn’t see me. It was the truth. I like truth.”

“And how has being a parent played a role in your spirituality?”

“Oh! That’s a good one. I like that one. First of all, gratitude. It was not so easy to become a mother. It took five years of trying. The fact that actually we’re now parents gives me very great happiness. I feel like some angel looked down and said, ‘Hey we missed that one. She needs to be a mother.’ I had help with that. I told my doctor I wanted to be a mother, but I thought it was too late. He saw that I needed to be a mother, and that was a great gift.” Tina was beyond the age when the State’s health insurance would help with fertility problems, “But,” she said, “He made it happen.

“Then all the things I’ve learned from being a parent. Spirituality is about being humble. And you want to give the little person all your love, and even love can hurt. He needs to be in the world on his terms. I learned a lot about support and mirroring.” She laughed. “Being a parent is an extremely important part of my life and always will be.”

On our first evening on Bjørnø, we sat around a low table in the main cottage’s living room. It was dessert time—fine Summerbird chocolates, interesting cheeses, thin flatbreads, and apples. As we talked, Tina spoke, among other things, about the two huge fires that had struck the offices of the graphic design studio she co-owned. She talked about the tremendous responsibility involved in recreating the business, about the trauma she still suffered. We listened, and some proffered advice. Now, in her garden, as she continued to weave the willow stems, I asked, “And how have the two fires and the stress afterwards—how have they impacted your spirituality?”

She looked up from her weaving. “Keeps me processing,” she said and then laughed. In a more serious voice, she added, “Keeps me working. I can’t just say everything is good. When something really traumatic happens, you try to find out a reason, and that didn’t really work. But I tried to find perspective. I needed to find a new form and hadn’t. So reshaping is part of the fire. Also you can’t find a solution in every situation. Humility again. Being able to say, ‘I don’t know. Can I have some help?’ Trying to see the bigger perspective.

“I really had a problem doing yoga and meditation. I found myself very tired just trying to cope in the first six months after. Then I went to Håå (the Scandinavian Yoga and Meditation School’s International Course Center), and it really helped. I had been there before the fire—a New Years course. A year before. When I was in Håå in 2011, during the course, the first fire happened in my office. I got a text message that there was a fire, but my phone was off, and I didn’t find out until later.”

“What meaning do you take from it?”

“Going to Håå a year after the second fire–that process really helped me. Being there restores me. There’s a lot of silence. I really love the silence, and it takes me a long time to break it because I don’t want it to go. The first course was with Franz.” Franz is one of the gentlest, warmest yoga teachers, leader of the school in Copenhagen, so both Tina and I have lived with him in the ashram. “He is part of my yoga family,” Tina said. “It was easy to be there in Håå with him. I didn’t have to discuss things with myself—just do my work.”

What a rich story! More please:)

Thanks for your comment, Janet. More to come on Monday. Did you go back and read Parts I & II? Part IV on Monday, Wednesday a piece about one of Tina's paintings. The following week, an interview with Tina's cousin. Stay tuned, dear heart.