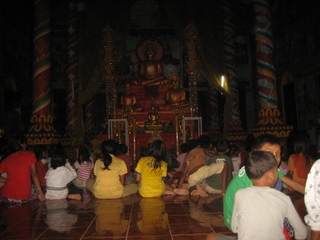 At last we were on the way to our true destination–Wat Opot, the Place Where People Change (more about this later). Wat, as I said earlier, refers to a temple and its grounds. Opot seems an awfully short word to mean March of the Red Ants. Beyond memory, there must have been a thriving community of ants here, but I would never see even one. The street that becomes the road away from Phnom Penh to the south was full of daily urban life: a plethora of motorcycle repair shops where whole families gathered around the object of repair; nearly as great a plethora of mobile phone stores; outdoor barber shops, also attended by whole families; shops with flip-flops and sun hats of every imaginable color and print; a shop with three of the previously described Asian toilets hung on display to show just how simple the plumbing is, with a few blue PVC pipes on a rack behind said porcelain, identifying the place as a plumbing supply shop; outdoor cafes; wedding venues adorned with gold and red silk and playing extremely loud music to share the joy with blocks and blocks of shoppers and workers; and, of course, purveyors of Pepsi brand gasoline.

On our left lay the city’s open sewers, the most beautiful sewers I have ever seen. Come to think of it, I haven’t seen any others, as they are, in western countries, closed away from view. These looked like an enormous, shining blue lagoon with floating islands of flowing green vines. The vines are cultivated as a soup vegetable, of which I would partake often over the next few days. Hundreds of corrugated iron buildings stood along the sewer/lagoon. Again, these sheds were mostly inhabited by Vietnamese, the principal growers of soup greens.

As we moved out of the city and onto the country road, dwelling styles changed to houses on stilts. Most houses consisted of about 500 square feet of open space, and were home to large families. We passed through a couple of villages, one where Wat Opot’s cook rode every day on her little motorcycle to buy the food she would prepare for about 80 people.

After more than an hour, we pulled onto the Wat Opot compound, and before our driver could unload our luggage, we were met by Chun Serein, who must have been watching for us for hours. Before I could even really get a look at her, she had embraced me with great enthusiasm, joy even, as if I were a long lost friend. After the hug she said that she had missed Wayne, that three days without him is like three months. But I’m making the conversation much more comprehensible than it was in Serein’s unique English. Throughout our short stay, she and I would laugh often over our mutual efforts to communicate through words, pantomime and sheer good will.

For me, Serein was a very important part of our stay. She is the essence of a karma yogini, working from dawn to sunup, filled with visible joy in all that she does, a mistress of cleaning, using the most basic supplies—a handmade broom, a few brushes, and water. She did laundry for us (unrequested) by hand and got the clothes cleaner than my washer does. Lest I make her appear the caricature of a saint, you must also know that she has a wicked sense of humor, of which you shall hear specifics when we come to the story of our (once again) non-functioning toilet.

On one edge of the compound, a large, octagonal multi-purpose building boasted a stage for karaoke and other performances. It also held the kitchen with its huge, hand-built woodstove, giant built-in woks and huge pots and pans. Until the community grew too large, this structure was also the dining room. Now the children come to the kitchen for their bowls to be filled and then carry them off to eat in groups of ten or so with their caregivers. Wayne, sometimes Mr. Sary the Wat Opot Children’s Community Director, and volunteers or guests like us, ate in a small gazebo next to the multi-purpose building. When we had finished eating, several children, most often small boys, gathered around to talk, sit on laps, eat leftovers, and use Cheyenne’s camera.

It was afternoon when we arrived, and as dusk moved toward night, Wayne made his way toward the crematorium for a short service. Any children who wish to, accompany him; everyone knew where we were going and why. On our first night it was only Nak who came. Wat Opot began as a hospice for AIDS patients, and there was a time when cremations were a regular part of life. Now, because of Antiretroviral (ARV) drugs, they are far less common. The crematorium had three rooms, one where the body would be laid out with food prior to cremation, a middle room where the cremation took place, and, on the other side, a room with photos of those who had walked on, a large gong, a floor mat, and a glass case containing silver urns. Someone had switched keys with Wayne without his knowledge, so that Saturday night, we weren’t able to get into the crematorium. Instead, we walked around it three times, made the sign of the cross and bowed three times Asian style, facing the case of urns in a large picture window. Then we headed back in to the center of the community.

Every Saturday night there is a children’s service in the temple where monks live in their separate but adjacent community. After our time at the crematorium, three teen boys came to Cheyenne’s and my cottage and commanded, “You come. You come.” They took our hands and led us to the temple, where the children were already seated in rows on mats before the large Buddha. Candles lit fantastic, colorful murals painted on the walls and ceilings. The 24-year-old head monk, draped in saffron, led the children, who chanted in unison with enormous, loud energy. Youth, enthusiasm, and what I would later see was true devotion, reverberated around the room, up into the high ceiling, and through my heart.

Lessons from the Journey: