MAGIC ON THE ROAD 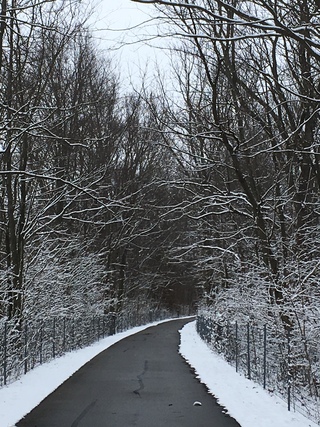 It isn't magic from a top hat; it's Deep Magic. The magic that happens when you step into the wardrobe and leave Spare Oom. Magic that has happened again and again when I've gone on the road with To Drink from the Silver Cup. I am on the road again.

On Tuesday, March 13, I flew out of Albuquerque, landing in Columbus, Ohio. The magic began a few weeks before departure when I asked my friend Catherine if she'd like to accompany me on this first leg of the trip. We'd talked about it earlier, but it wasn't clear then if her life would allow it. A few hours after I asked, she had booked herself on my flight. I hardly ever get to travel with another person, and I was so excited about flying with Catherine and spending a few days with her and our friend Shelley. It was actually Catherine who had connected me with Shelley and who sent her a copy of my book a year ago at Christmas. That led to Shelley getting excited about organizing some events for me in western Ohio and us continuing to do the process I do with people who have offered or are considering helping to set up events on my DIY tours. Shelley was full of ideas–maybe twelve or fifteen of them.

The current tour had a magical start that began on the last day of my previous tour. That day, I entered an El station in downtown Chicago, heading t0 O'Hare. I was laden with two heavy bags as I approached the ticket machine. A young man stood there, looking a little forlorn, and I may have looked forlorn, too, as I'd seen that there was no elevator or escalator down to the tracks–only a very steep, narrow staircase, which looked potentially dangerous, given my load. Moreover, I wasn't exactly sure how to purchase the correct ticket. The young man stepped up to help me and confessed that he had just left a court hearing and had no money for a ticket. I bought his ticket, and he carried my heaviest bag down the steps. On the train we chatted until he reached his stop. We shook hands and wished each other well. I was so moved by how we'd helped each other, that I posted a visual of the El system and a short version of what had happened–a magical moment at the close of my tour. Suddenly a reply to my post popped up from someone I didn't know: "Are you coming to Minneapolis? Please, please please, please, please." How could I say no to that? From that one request the rest of my present tour began, although I've left Minneapolis for last, hoping it will have thawed a bit near the end of April.

Shelley's many ideas developed into four events, beginning on March 17, which meant that she, Catherine, and I had a few days of leisure before I started working with crowds–well, audiences. We explored the quaint and hip town of Yellow Springs, two miles from Shelley and Jon's farm home. Jon gave us a tour of Yellow Springs Brewery, and we sampled Captain Stardust, a favorite beer. We walked and talked and laughed a lot, roasted brats in the woodstove, ate ice cream at Young's Dairy and attended Lenten lunch and supper studies. Shelley drove us all over the confusing roads of farm country. The event on the 17th was small but filled with meaningful, heartfelt conversation punctuated by laughs and a few tears.

The next morning I caught a bus to Louisville. Two buses, actually. I hadn't ridden a long-distance bus in more than thirty years, and just as with city buses, it was an eye-opening reminder that there are people who don't have the resources to get around by any other means. For me, it was simply the cheapest mode of transport. Another magical encounter greeted me at the bus station. Bethlynn, whom I knew in 2004-5 in Kalamazoo but hadn't seen for several years, drove 4.5 hours from Huntsville, Alabama to visit with me and attend my reading that evening at Springdale Presbyterian Church. She had seen one of my posts on FB about being in Louisville. Sometimes I'm embarrassed about promoting my book (and in the process, promoting me) so often on FB, but Bethlynn said more than once that she was so grateful I had. We talked nonstop, catching up with each other and with what we each knew about our mutual friends from Western Michigan University. Bethlynn knew the best place for lunch, which I recommend highly, if you're ever in downtown Louisville–The Garage.

My reading in the evening was attended by the members of two book groups, who had read To Drink from the Silver Cup, plus a few others, who had not, and the pastor, Dwain Lee, whom I was meeting for the first time IRL. Dwain had written one of the blurbs for my book, and when I saw how close Louisville was to southwest Ohio, I asked if his church would like to host a reading. The format of having book groups reading in advance proved to be excellent. The members were warm and enthusiastic and ready with great questions and comments.

The next morning, more magic awaited. During all my touring a year ago, just as now, it is the unexpected generosity, often of people I barely know, or even hadn't known before that constitutes magic. Deep Magic. Several years ago, I was part of a writers' group in Albuquerque. There were five of us in the group, but Debra was the only one with whom I felt a genuine connection. After I left the writers' group we saw each other a couple of times and then lost touch but reconnected a while back on FB. For all it's flaws, I have to acknowledge that there is a certain magic inherent in FB, too. Between the time we'd seen each other and our reconnect, Debra and her husband Dave had moved to Ohio. I looked up Lancaster on the map, saw that it wasn't too far from Dayton, where one of my readings would be held, and messaged her my itinerary. She thought they might come. Then suddenly, a few weeks later, Debra messaged me that she and Dave would like to host a house party the evening after my Louisville event. They would pick me up in Louisville and would love to have me stay with them for a couple of days so they could show me some of Ohio and then drive me back to Shelley and Jon's. This from people who knew me mainly through critiquing my writing and, in Dave's case, from meeting me to say hello just before a writers' group met in their home in Albuquerque. I was blown away by such extravagant hospitality. They did, in fact, pick me up in Louisville, and we talked all the way to Columbus, where they introduced me to Katzinger's, a Jewish deli I can also recommend highly next time you're in Columbus. I learned more about Ohio than I could retain, but we also talked about Nova Scotia, where they have a second home. The evening reading included neighbors of various political and social persuasions. They, too, were highly engaged and engaging. The next morning, in ice cold rain and wind, we bundled up and visited the Hocking Hills in the Appalachians, enjoying short walks at the Rock Mill and covered bridge and up to a view of Man Cave. Yes, that's what it's called. I gained an appreciation for the natural beauty of Ohio that I never suspected existed. Magic of another kind.

I returned early to the farm in Enon, Ohio because of an anticipated first-day-of-spring snowstorm. After the storm Shelley and I drove in to Yellow Springs, so I could buy ingredients for kitchari, which I'll cook for her and Jon, and then we took a beautiful, snowy walk through forest and field. I saw cardinals' red against the white and felt so fortunate. As a child I used to dream I would one day see a real cardinal. Their brilliance was fabled, only to be found in picture books and on Christmas cards–more magic.

I'm so grateful that I got to join in the magic of the first part of the journey, Anna. Thank you for encouraging me to come along!

Wonderful "magic" all along the journey! Thanks for posting! Love -

Yes, winter in the mid-west can be magical, and cold! But your experiences sound wonderful and I'm happy for you. Off to a wonderful start.Miss you here,tho, friend!
I've unfortunately lost the date you'll be at Hope RC in Holland - could you please tell me again, thank you!

Catherine, it was so, so special. Thank you so much for being part of it!

Thanks for all the love, Kathy!

Yes, Fonda, you know all about that Midwest weather! It's melting fast today, though, a sign that spring is actually here. Winter's last hurrah. Oops, no, snow expected again on Saturday but warmer and sunny on Sunday. Spring.

Joy joy - what a great beginning of your booktour, it made me happy to read about all the magic openings in this journey :-).
Love, Tina

What a great trip! Glad you made it all the way to Young's. That was always a treat for us. And it looks like you got a nice piece of the bike path, too.

So eager for the Magic to come to Holland! And enjoyed reading about all the places you are speaking now!

I love these stories from the road and I am grateful for the kindness of those you meet along the way.

Thank you, Tina, for experiencing joy for me and for sharing it!

I'm glad to be able to share some places that bring fond memories for you, Monica. I've thought of you often when I've been in the YS environs.

I'm eager for our meeting, too, Dorothy.

Thank you for feeling gratitude on my behalf, Cara. I feel it too. So much.