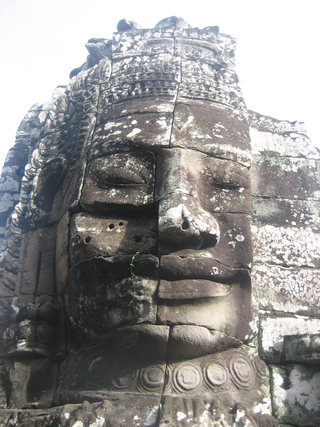 Back at the tuk-tuk, Mr. Thi was disappointed to learn that we had already eaten breakfast. I found out later that he got a commission from the eating establishments he took us to, and we learned that he made very good selections. After Angkor Wat and breakfast, we chugged along to the Bayon Temple, which turned out to be my favorite. From a distance it looks like a haphazard pile of huge, black, lichen-covered blocks, almost a giant hill rising from the forest floor. Coming closer, we saw enormous faces, each taller than a human being, made up of several large blocks. The faces showed generous lips smiling enigmatically, broad cheeks, and blank eyes. There are 177 of them, and they form the walls and rooms of a structure that climbs toward the heavens. At one time the faces totaled 181. There was something poignant, haunting, about these visages. Today, no one knows who they belonged to or why they are here.

I had thought that Ta Prohm would be my favorite. It’s the one with giant tree roots growing down over walls, causing some of them to collapse. Oddly, certain smells and sights kept reminding me of Europe. Piles of stone recalled scattered tombstones from the Jewish cemetery in Prague. The damp, earthy smell of the forest took me back to the woods in southern Sweden. The Hindu figures and long-stemmed lotus blossoms brought me into the yoga room in Håå, back to the meditation called “Pavarti’s Lotus.”

At Ta Prohm, Mr. Thi kept saying, “Temple raider, temple raider. Angelina Jolie.” I knew what he was talking about, but I never saw the movie. Instead, I thought of the Disney version of The Jungle Book—the monkeys scampering naughtily over tree roots that grew over old temple walls. These trees, though, were enormous—powerful and solemn.

We visited many more temples, encountered countless sellers, engaged with them in conversation, and never once had to show our forty-dollar passes that we had been repeatedly cautioned not to lose. At the end of the day we took a long tuk-tuk ride to my second favorite temple, Banteay Srei, also known as the Lady Temple, special in so many ways. The stones are golden pink, and the friezes are incredibly detailed—three-dimensional and lifelike. Countless ladies, hundreds of years after their creation are still cavorting along the walls or raising slender, long-fingered hands in blessing. In the center of the temple stand three structures that I later learned were libraries. How perfect is that? And they say that Banteay Srei had to have been built by a woman because the carvings required too delicate a hand for a man to have done it. When it comes down to it, I don’t see how one person could’ve sculpted so many fine figures unless she took a lifetime to do it, though the style is very uniform. I imagined a women’s collective carving during the day and after supper reading together, deciding that there must be libraries.

Before we started back to Siem Reap, the three of us had already started talking about the possibility that we wouldn’t take the two days we had originally planned for the temples. We felt we had seen the best, and it seemed that more would overload the senses. My impressions could be summed up in one word: mystery. There is a sense of mystery in the very stones, the ancientness of it all. But also the temples raise so many questions. Why were these hundreds of enormous structures built and built and built? To what end? Simply as expressions of beauty? Or worship? There are no ruins of communities around them—just temples. Temple after temple. Although I haven’t been there, they made me think of the Mayan temples. Or of the stone circles I have seen in England and the stenhøj of Denmark. Something left behind to inspire wonder in every sense of the word.

Back to the mundane at the hotel–sure enough, the toilet leak had not been fixed. But okay. The solution was to flush as infrequently as possible. We had time to shower off the dust of the road and rest a bit from our long day. Then Mr. Thi came back for us and took us to a restaurant where there would be a traditional Khmer dance performance after dinner. The food was served buffet-style. I felt sure that many items were delicacies, but I found that I was not feeling so adventuresome at the end of the day.

The next morning, we breakfasted in the hotel restaurant and then took an early and somewhat faster bus back to Phnom Penh. There Wayne contacted a tuk-tuk driver that he used regularly, and we were off to Wat Opot.

Lessons from the Journey:
1) So much in life is a mystery to be embraced
simply as mystery.
2) Libraries are forever.