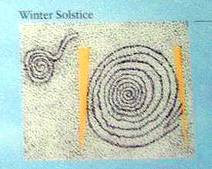 Diagram of Chaco Calendar at Winter Solstice
This piece first appeared as a column on December 23 in my hometown newspaper, the Gallup Independent. Printed here with permission.

Long before I knew about this calendar, I imagined us little humans on our little clod of Earth moving inward and outward on a spiral as we moved away from the light of the sun on the summer solstice and toward the sun on the winter solstice. I didn’t envision the spiral and the light in the configuration created by the Chaco astronomers; for some odd reason, I imagined our winter movement toward the light as if we found ourselves at the very center of a great inner ear, the spiral called the cochlea, moving outward from the darkness into the glorious light. And at the time of longest light—summer solstice—strange as it seemed, we moved along the spiral toward the darkness once again.

Important things also happen in the light. We move our bodies. We do work. We create. Plants synthesize the sun’s energy. Daytime animals move about. We rejoice in the light. We long for the light during the darkness of winter, for it is not only the nights that are dark but also, often, the days. Thus, people the world over celebrate the knowledge that, on whichever hemisphere we find ourselves in the season we call winter, our half of the Earth is once again returning to the light.

What would it mean to live light and travel light? To not have so much stuff, not be burdened by material things. To not use more of the Earth’s resources than we need. To think before driving off somewhere, asking if we really must use up that gas and add to our carbon footprint. To be generous, maybe even until it pinches a bit. To be grateful for all things.

What does it mean to spread the light, to be the light? To let our first response be yes rather than no. To share good news. To listen—the greatest gift of all. To love, because love is what makes people blossom. To offer an experience if it might help and if it’s wanted.

As the Earth turns toward the sun, let us, “Live light. Travel light. Spread the light. Be the light.”

Thank you, Rick, and Merry Christmas to you! I guess I could've added, "Go solar!"

this was lovely, Anna. Every year we celebrate the solstice and I enjoyed this.

Thank you, Patty. Maybe you'll tell me next time I see you some of the ways that you've celebrated Solstice.

certainly! It's a pretty simple ritual we follow but I'd be glad to tell you about it sometime.

That’ll be great! Thanks, Patty.