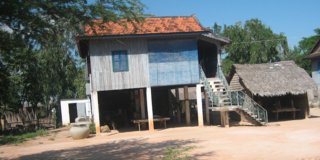 The Mekong Express was a comfortable coach used by many Cambodians who were not sightseers. Despite the fact that mostly local travelers used it, one of its features was a young Khmer woman who acted as our tour guide and hostess. Before we’d even left Phnom Penh, she was telling us, first in Khmer, then in English, the legend of the city’s founding by a woman of great charity. A ways into the trip, she served us a box lunch containing a savory meat pie and a little round sponge cake.

Our trip took us first along the Mekong River. Its banks were densely packed with corrugated iron sheds, homes mostly to Vietnamese. As we progressed, there was very little space along the country roads that didn’t contain houses built on high posts. Many of them served as both homes and small businesses. People spend their daytime hours beneath the houses, where air circulates freely. At night, when it’s cooler, they sleep upstairs in the house. We saw beautifully constructed homes standing right next to grass huts that were literally falling apart but still clearly lived in. Neighborhoods in the countryside did not seem at all segregated by social class.

The little businesses in the open air portion of the houses or under shelters closer to the road might be selling flip-flops and hats; galvanized watering cans; long, slim sides of Brahma beef; highly polished wooden chairs, tables and bedsteads. Every shop seemed to be selling the mysterious, ubiquitous, one-liter Pepsi bottles filled with yellow liquid. Cheyenne finally asked Wayne what that yellow drink in the Pepsi bottles was. He laughed. “It’s gasoline,” he said. Your friendly home service station.

We arrived in Siem Reap at dusk. Charcoal smoke and dust filled the air. The hotel had dispatched a tuk-tuk driver to meet us. The tuk-tuk immediately went to the top of my list of transportation modes. Amazingly, ours was a 110 cc motorcycle that pulled a little two-wheeled, two-seat carriage with a surrey roof and open sides. The seats faced each other, adding to the enjoyment of our conversations. I call it amazing because that tiny engine could pull three large Americans, all their luggage and one small Cambodian driver. Plus, it’s such a fun name. Tuk-tuk. It moved slowly, but I liked that because it allowed us to really see the countryside, the way of life. It was also easy to make contact with other people in their tuk-tuks and on motorcycles. As we passed each other, we smiled and waved and bowed. Plus, in the heat it’s very nice to have the breeze flowing past you. And for all those benefits, what’s a little dust mote in the eye now and then?

On the way to our hotel, Wayne said, “If you like Christmas, you will love Siem Reap, because here it’s always Christmas. Sure enough, strings of colored lights decorated almost every building along the main streets. My favorite was a pink and green confection that formed a steaming teacup.

Our driver was the smiling Mr. Thi, who quickly arranged to pick us up at five the next morning, so we could watch the sun rise over Angkor Wat. He said he would also take us on a tour of other temples for the next two days.

Freedom Hotel boasted much polished wood, an elevator, an attached restaurant, Internet for a price, and a mysterious leak in our bathroom. The floor was soon well covered in a layer of water. Thankfully, it was clean water from the toilet tank. Although I told the desk about the leak the next morning, I could tell that nothing would likely be done about it. I was right. Wayne said he didn’t know if it’s due to the type of glue they use on PVC pipes or if it’s because of the heat and humidity, but plumbing leaks are frequent and ongoing. We would experience more of this as the Cambodia Journey unfolded.

Lessons from the Journey:

2) A pond for a bathroom floor
is something you can live with.

Ms. Anna, I absolutely enjoy your description of Cambodia. It brings back so many treasured memories for me (particularly the joy of riding in a tuk-tuk). Alright, that's it. I am walking out of work and catching the next flight!!!

Thank you, Josh. Don't leave yet. I'll come along! Did I know that you'd been to Cambodia? I'd love to hear about it.

Very interesting to return to Cambodia!

As always, I enjoy having you along on the journey, Sally.