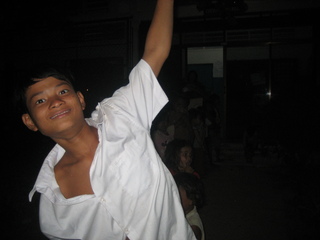 It’s harder to write about Wat Opot than about ancient temples, the delights of riding in a tuk-tuk, and the lush Cambodian countryside. The lives here were not once lived in now ruined temples, and though it was a minor wonder that in ten years ten buildings had been constructed where there were only rice fields and marching red ants, telling about Wat Opot requires going deeper. I have to tell about lives that have been formed by great tragedy and yet are some of the most vibrant, joyful lives I have ever encountered.

When Wayne took us on a tour on a humidly brilliant Sunday morning, our first full day at Wat Opot, he salted the tales of each building, its function and how it came to be, with stories of children and parents and how they came to Wat Opot. AIDS had touched every single one in some way. Some were living right there with us, and many whose stories we heard had died.

That Wat Opot is the hub of a much larger community was especially evident in three of the buildings. The first was built by the Cambodian government to be used in any way the community saw fit. One of its three rooms was a combined conference room and photo gallery. Sometimes the staff held meetings there; at other times, people came from other parts of the country for AIDS-related training and planning sessions. In the middle room silk weavers were busy at work, and eight sewing machines sat idle on tables. A sewing teacher came two days a week to teach community women how to make clothing. Although the project was sustained mostly by small donations and operated on a budget of $3,000-4,000 a year, there was a drive toward self-sustainment and employability. The third room was a dormitory for older boys.

A second building, the home care unit, reached far out into the community, providing AIDS education and assisting people who were having difficulty taking their medications on the rigorous schedule that is essential if the drugs are to be effective. I was so touched to learn how the home care service creates accepting communities around families that had previously been shunned because of AIDS. They would bring a party to the family’s home with games and food enough for the whole village. At first neighbors watched the party enviously. Before they knew it, the children couldn’t help joining the fun and were soon racing with eggs on spoons, handles clamped in their mouths. Integration had taken place with a magician’s sleight of hand, all resistance gone.

I had to use the home care bathroom on one of the days that ours wasn’t functioning, and I got to see how that unit is truly a community center. About ten people sat around chatting, laughing, one person using a shower next to the toilets, others talking to workers across desks. All day long people came and went down the narrow road onto the compound on small motorcycles and scooters.

The duplex where we stayed speaks of Wat Opot as a worldwide community. Wayne and Mr. Sary live in separate rooms in one half of it. The other half is dedicated to the use of volunteers and visitors who come from the US, Australia, France, Japan, England, Switzerland. Like me, Wat Opot changes them more than they change it. As we toured, Wayne told nearly as many stories about the transformation of volunteers as he did about children and families with AIDS. He spoke of an Australian who began taking black-and-white photographs of the children and realized his calling as a photographer. He told us about a Japanese teenager living on the edge of suicide, who realized at Wat Opot that she wanted to live and serve. This, more than changes in the children (although those happen too), is why Wat Opot’s other name is The Place Where People Change.

The children go to the village elementary school across the road from Wat Opot and to the nearby high school by bicycle. There was a school building on the compound for kindergarten and preschool, taught by two local women with sixth grade educations. At four o’clock a hanging auto wheel rim was struck a few times with something metal (I imagine a tire iron), and tutoring began for the children returning from school. On Sundays an artist with a national reputation came to teach and guide the children through the painting of lively, whimsical murals, professionally executed, on either end of the school building. One pre-teen boy, Chandara, loved painting and showed talent. He proudly exhibited a stack of the children’s watercolors, giving no more attention to his own than to those of his comrades.

By evening, Wayne’s keys had been returned to him, and we trooped to the crematorium at dusk, perhaps ten of us, to honor friends and family. Mak Phon, who shouted, “Anna,” with such delight every time he saw me, quickly winning my heart, sat on the mat next to the gong. Pictures of the dead hung on the wall behind us; their urns stood before us. All kept silence while one of the girls lit a candle and used the flame to light three sticks of incense. Then Mak Phon hit the gong, waited for the vibration to end, hit it again, and one more time. Srey Mou sat on my lap. My hand lay loosely over her belly, so I could feel the soul the she put into her chanting from the vigorous movement of her diaphragm. Suddenly, almost without my realizing it, the chanting shifted, and I found I could understand it:

After the chanting we stepped outside into the graying light and walked around the crematorium three times. Two small hands found mine. Stopping before the window of urns, we crossed ourselves and then bowed with our hands at our hearts three times. I put on my shoes, and we walked past grass homes with lights flickering inside. These were huts where families living with AIDS, having no other place to go, eked out their days. We found our way back to the same low wall where we sat the night before and where we would sit every additional night of our stay. There we were hugged and questioned, often the same questions many times as the children exhausted the extent of their English. When the lights came on, the last, life-giving ritual of the day repeated itself—the children receiving their ARV medicines.

Lessons from the Journey:
1) Who will change cannot be predicted.
2) Death is an accepted and honored
part of daily life.
3) Embracing death means embracing life.


© Anna Redsand 2016 All Rights Reserved
Be the first to comment