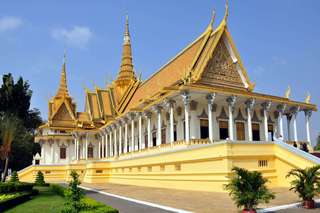 Our destination in Phnom Penh City was the Golden Gate Hotel Annex, but our cabbie took us to the Golden Gate Hotel. We walked up a broad flight of stairs into an ornate lobby, replete with lucky reds, carved and shiny dark wood, and gold leaf. At least that’s how I remember it now. It took a bit of talking at the desk for us to make the attendants understand that it was the Annex we wanted, and some additional careful communication for us to understand where we needed to go.

Thankfully, the Annex was immediately across the street. The lobby there was plain and functional with walls painted turquoise. We stepped up to the desk with our big matching duffel bags. Before we could get started with the check-in process at $20 a night for two, I felt the presence of a large man at my elbow. I hadn’t seen Wayne for more than thirty years, but in photos on his website he looked much the same as he had when we knew each other in Gallup–shoulder-length hair, a beard that now had some gray in it, black shirt and pants.

A few seconds after our awkward half-hug, I saw that there’d been a transformation. No beard, brush cut hair, and a crisp white shirt. He said, “I changed my image for Obama.” At sixty-three, Wayne, a Viet Nam vet and former medic, said, “This is the first time I ever voted in a US election. It’s the first time I felt there was someone worth voting for.”

Our room was on the second floor of the Annex. There were no elevators, but a young man helped with our bags. We had two twin beds and a hodgepodge of unmatched but serviceable furniture. It was blessedly clean, which was what mattered most to me. Meditation forces you to confront yourself face-to-face. So does travel. What you see of yourself, of course, is often not pretty. Throughout this trip, I kept running up against what I have to admit is an obsession with cleanliness, especially when it comes to food and other people’s dirt. It seems that once my own dirt has been layered atop the dirt of others for a few days, I’m quite happy with what seems now to be just my own layer. My mother is a nurse, and when I was putting myself through school as an operating room technician, I realized one day that she had run our kitchen on the principles of sterile technique. So I thank her for this obsession, and I hoped that the trip might help me at least diminish it.

One thing we loved in our room, and I do mean loved, was the tiny bar of soap. Pepto-Bismol pink, it was about one and a half inches long and an inch wide, engraved with the word, “TOURIST.” We laughed, and Cheyenne took a picture of it. We said it made perfect sense, because you never use the whole bar during your stay. We wouldn’t even use up this teensy one, and it became one of our souvenirs.

After I showered, Wayne and I met on the hotel’s second floor balcony. We heard music playing not far away—someone’s late night party. Except for the lit pagoda-shaped roofs of the royal palace in the smoky distance, the skyline looked like that of a poor city with buildings two to three stories high, plus a few high-rises. Wayne and I visited for more than an hour. One of the first things I asked him was how he knew of this bargain-rate hotel. “Oh,” he said, “I lived in this neighborhood when I first came to Phnom Penh. I worked with street kids here.”

That was the beginning our thirty-year catch-up process and inadvertently, but quite naturally, also beginning of our interview. When I realized that’s what was happening, I slipped back to our room, where Cheyenne was watching a US TV program with Khmer commercials, to fetch my recording device. At 2 a.m., we agreed to meet in the lobby at 9 and go to breakfast.

I can highly recommend the Garden Cafe around the corner from the hotel, assuming it’s still there, if you’re ever in Phnom Penh and start hankering for some beautifully prepared western food. Begun by a former missionary, an Aussie by his accent, the food is superb, and if you sit facing the wide entrance, you are looking at bougainvillea and many other showy, flowering plants whose names I were a mystery to me.

Wayne had lived in Cambodia at that point for twelve years and had never visited the prime Khmer tourist attraction, thousand-year-old Angkor Wat, thought to be the largest structure of worship in the world (a wat is a temple and its grounds). Every month Wayne donates his VA check to the Wat Opot Project, the children’s community he runs, but recently his aunt died and left money for the project, including a thousand dollars earmarked for his personal use. He had asked if he could accompany us to Angkor Wat on his first vacation since 1980. Cheyenne and I had planned to go to Angkor Wat on our own, and I confess to having been a little nervous about negotiating unfamiliar territory, so I was thrilled to have Wayne along as a guide to the country, if not a place he’d never visited. His presence made the trip both stress-free and satisfying.

After breakfast we took a walking tour around central Phnom Penh, viewing parks, government buildings, and getting up close to the royal palace. It was hot and sticky, not my favorite kind of weather. In the early afternoon, we strolled to a more commercial area, where long, covered verandas fronted the stores and reminded me of photos of the French Quarter in New Orleans. The Mekong Express Bus pulled up in a side street beside some ordinary businesses. If Wayne hadn’t been with us, I know I would’ve been anxious. Was this really where we would board a bus for Angkor Wat? It certainly wasn’t a bus station. No reason to fear: we were soon ensconced for the 6-hour trip to Siem Reap, the town that is closest to Angkor Wat. It was a town I’d heard my Cambodian clients in Oakland mention often.

Lessons from the Journey:
1) Luxurious (the Golden Gate Hotel, as
opposed to the Annex) is not always best.

2) Cleanliness may not be next to
godliness, and it’s not so important
outside the operating room (this was a
hoped-for lesson).

3) Less is so often more than enough
(the tiny soap).

4) Planning when traveling is good, but
trusting what will come is very good
(Wayne unexpectedly accompanying us
to Angkor Wat).