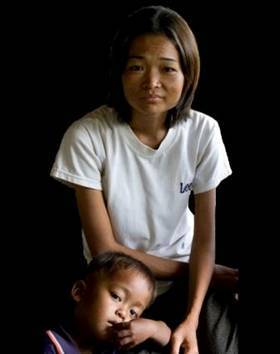 INTO THE ARMS OF STRANGERS

This post, by Wayne, tells about what happened in Chay's life after we left Wat Opot and Cambodia. Taking you beyond Wayne's update from 2009, Chay is now in 6th grade, happy and healthy, still living among his sisters and brothers at Wat Opot. To read this story as a photo essay, click on the link below the photo.

Those eyes gave her away on the very first day I met her. I have seen that look before so many times in the past, and although it has been awhile, I knew then and there that she would not be with us for very long.

I suppose it did have an effect on how I related to her. I wanted so much to be wrong, at least for Chay’s sake, but when she asked to return to the hospital after a month's stay with us, I knew she would not be coming back.

For two weeks I had watched as she slowly released the only thing she had left in this life to live for. At first it was difficult for her, because Chay had known only her skirts as the boundaries of his world and only his mother’s loving arms for protection and comfort from a world that had already taken his Father. She was determined, however, to make sure he would be taken good care of, and so she pushed him into the arms of strangers. She would never let him out of her sight but day by day withdrew more and more into the shadows of his world–watching with motherly pride, yet with tears in her eyes, as he won over the hearts of others, and showered them with the hugs and kisses once meant for her alone.

She left his life quietly with no word of farewell, requesting to be taken to the hospital while he played in his new world. I wasn't planning to tell him of his mother's passing until he grew a little older, but our children have no secrets from each other and before I knew it, his head was shaven and he had changed from a rambunctious little child to an attentive young man dressed in white. Chay seems to have accepted his mother's passing without question, or perhaps, like so many of our children, he still feels his mother's presence somewhere in the shadows of his existence.
2 Comments

Thanks Anna,,, Chay just happened to be in the room when I opened your e-mail. He is now in the 8th grade and doing well. One of my best helpers when not in school. We were able to track down some of his extended family members awhile back and brought him out to meet them. After years of thinking he was all alone, he was really happy to meet his grandmother and other relatives. Although he will continue to live with us, he now has a place to visit on holidays, like many of the other children, thanks to the efforts of our new director who is doing all he can to locate their families.

Thanks so much for this update, Wayne. I'm so glad that Chay's extended family has been found for him. I'd love to see a current picture of him. Loved that precious little boy.