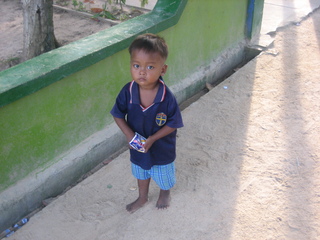 Our Day 10 in Cambodia was Thanksgiving Day in the US. At Wat Opot, Thursdays and Sundays were days off from school. Despite the fact that it was Thursday, and the children were at home, they avoided us. When we tried to engage in conversation, they ignored us. They knew–knew that we were leaving. Besides, without saying the actual word, we had said goodbye the night before. The only one who talked to us that day was Chay, in his excitement about the crab (see February 15).

Just before 10 o’clock, the tuk-tuk arrived to take us and Wayne back into Phnom Penh. Wayne had reserved a room for himself at the Golden Gate Annex, where he would spend the night. It was convenient for us because we could leave our luggage in his room during the day, since our flight was not until nearly midnight. Wayne seemed much more aware of it being Thanksgiving than I was. We went to the Garden Center Cafe, where we’d eaten breakfast ten days earlier–the place owned by the Aussie and frequented by Westerners. A sign told us it would be open that evening only for guests who had booked for Thanksgiving Dinner. Wayne said that one thing he really loves and misses is pumpkin pie. The owner came in with a stack of pies for the evening meal, and Wayne finagled a slice of it, to his great delight. I don’t think I ever felt so happy for someone else getting the special food they longed for.

After lunch we went around to some shops to look at silk and cotton scarves. One of the shop owners buys from Wat Opot weavers, and so we purchased several scarves and other small items there. Afterwards we went back to the hotel and did what you do in hotel rooms—watched TV.

It was all over the news about the attacks in Mumbai and about people stranded at the Bangkok airport. Thankfully we were flying out through Seoul-Incheon. When the news was over, we were treated to one of the oddities of travel: Michael Moore’s Sicko appeared on the screen—his film exposing the wrongs of the American healthcare and insurance system. We laughed and were sobered in turns, as happens with Michael Moore's work. What an irony to be watching this film in Cambodia. I wondered if any Cambodians were watching and if they were, what they made of it.

After the movie, we ventured back out into the now dark streets. We walked to an exotically (to us) decorated neighborhood restaurant where we ate our last traditional Khmer meal.

It was hard leaving Wayne, maybe a little hard for him, too, I felt. We may have been the first visitors he had whom he’d known in his earlier life. Me, at least. I was hoping he would come with us to the airport, and he did, sharing our last tuk-tuk ride.

We had a ten-hour layover in Seoul-Incheon, which allowed us a couple of pleasures. This was the most passenger-friendly airport I had ever been in. On the third level were two hotels–simple but luxurious. We could rent a room for a minimum of six hours, base price $47. For that we got two clean, comfortable twin beds and a shower, sink and toilet in a compact but serviceable space. There were also free recliners and full-length upholstered benches in the airport at large for napping, showers, manicures, pedicures, and massages. There were several full-service restaurants.

We rented a room and enjoyed some sleep while we awaited our second pleasure—meeting up with my nephew Gabe, who was teaching English in Seoul that year. We visited with him for a little over an hour in a downstairs cafe, before he had to go and teach. Every time I get together with Gabe, I appreciate him more and more, in part because we are both writers and can hold those arcane and oh-so-satisfying conversations about our shared passion for words and stories.

We reached Albuquerque around 8 o’clock on Friday evening, our only delay having been in Denver for the first de-icing of the season.

Lessons from the Journey:
From the Bard: Parting is such sweet pain.