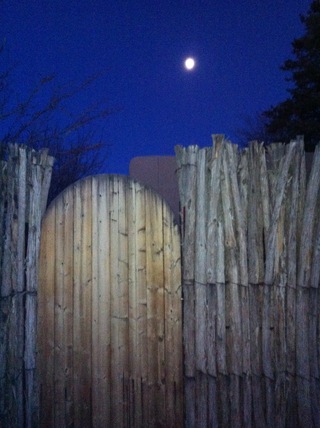 On one of our last evenings at Wat Opot, I noticed two brilliant heavenly lights near the horizon and just above them, a sliver of moon. To be that bright, I thought they had to be planets. A few twilights later, I was walking in my own neighborhood back in Albuquerque, and I saw those same heavenly bodies, the moon now nearly swollen to half, and all three appearing to be a little higher up in the sky. I was missing Wayne and the children and that strange land that had become just slightly familiar. I took comfort from the fact that we were seeing the same conjunction of planets and moon. I wanted names for these signs of connection, and synchronously, when I walked through the door of my home, Star Date was running on KUNM. Even more miraculously, Sandy Woods was telling me that I had been viewing Venus and Jupiter beneath the moon in the night sky. I gave thanks for all the connections in life.

I have been writing in this series about Lessons from the Journey, and how Wat Opot is often referred to as The Place Where People Change. There was one change I hoped for, beginning with our first night in Phnom Penh. There was a second change that I should have been able to predict but didn’t.

The first was my hope that I could become less concerned with cleanliness, especially around food. My mother was a registered nurse, and when I was in college, I worked as an operating room technician. That was when I realized that my mom had run her kitchen on the principles of sterile technique. I blame my fastidiousness about food on that upbringing. Sadly, Cambodia didn’t change me significantly, if at all, in that respect. I continue to try to be aware when some food standard doesn’t meet my surgical benchmarks, and I work on letting go. I try not to be grossed out when a restaurant drink is served in a glass bearing a perfect lipstick kiss. More than my experiences in Cambodia, which was actually quite clean overall, remembering what starving people ate in the concentration camps has helped me. Some of items I cannot imagine crossing my lips were the things that enabled them to survive. I remind myself that I can drink from a kissed glass and live.

The second change, the one I didn’t predict, was an increased awareness of wanting to live simply. I’ve been accused at times of being a minimalist, of living in a Zen-like home. But my version of simple is opulent compared with what I witnessed in Cambodia. After my return I thought about ways I could simplify further. When I move around the house at night, I could use solar or crank flashlights as they did at Wat Opot before the generator turned on each night. I could collect water in a basin in the bathroom and use it throughout the day rather than tapping fresh water for each use. I had wanted for a long time to set up rain collectors in my yard, and I did that. I realized, too, that I was able to do some things in Cambodia because it is a hot country. Cold showers, for example, were a refreshing pleasure there, not something I had to endure. In Albuquerque using a basin of water in my 60-degree house was more than I could tolerate at the end of November. But this past summer, I turned off the water heater and enjoyed lukewarm to cool showers, using much less energy than I would otherwise. I would love to live in 200 square feet of space or less, but to do that I would have to find land and build, which is probably impractical at this stage of my life. Nevertheless, I came back from Cambodia with an increased sense of my own material wealth, which I mostly take for granted. The children of Wat Opot, with their joyously vibrant lives in the face of tremendous loss showed me that an abundant life is not about having material goods.

Lessons from the Journey:
1) Excessive cleanliness is not necessary
to survival; in fact, it may be harmful to the
immune system.
2) Keep on simplifying.
3) Abundant living does not come from
material wealth.

Thank you, Catherine, and thank you for commenting.

Enjoyed! What a rich life you lead, Anna! Love the way you practice what you have experienced! You give me great challenges! Thank you!

Thank you for your kindness, Dorothy. You are a role model for me, too, living life very fully at this point in your time on Earth, actively practicing the changes you've been led to. Thank you!