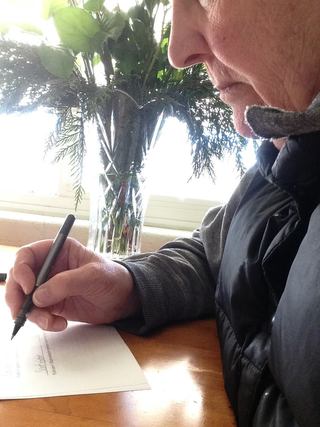 KILLING THE BABY
or
GIVING THE BOOK A NEW TITLE

I had to kill one of my babies last week. It might have been my favorite baby of all. The baby was the title of my memoir, to be released by Terra Nova Books, Fall 2016. Writers talk about cutting favorite passages or phrases as killing our babies. A baby might be the most wonderful group of words I’ve ever written, but it just doesn’t belong where I’ve put it. My book’s title, as many of you know, was The Silver Cup. And I loved it. I thought it was intriguing and at the same time expressive. The memoir's first title was Longing for Home, which I thought was not nearly so interesting, perhaps even hackneyed. Besides, The Silver Cup had come to me as if I were a lightning rod in the path of a heavenly bolt.

When I read The Silver Cup in my publishing contract, I saw the dread parenthetical wordsbehind it—working title. But in subsequent meetings with my editor and the publisher, The Silver Cup was mentioned so often by name that I thought it was safe. I know that publishers often want to change a title. In fact, I always want to apologize for the subtitle of my Viktor Frankl book, which my editor changed. Viktor Frankl: A Time to Live became Viktor Frankl: A Life Worth Living, and I always feel I need to say, “Every life is worth living.”

Last week I got an email from my editor suggesting that we think about whether the current title (without the more explanatory subtitle) would draw as many readers as it could. Would a reader, seeing just the spine of the book on a shelf, pick it up, open it, and hopefully want to buy it? The editor supplied me with some guidelines for thinking about a title’s function and marketability. He suggested a couple of titles that were definitely more explanatory but, in my opinion, quite boring.

Curiously, as I read through Marty’s missive, I didn’t feel a clutch of anxiety, which I often do when my work comes under the knife. I thought the guidelines made sense, and I would do anything I could to get potential readers to take the book off the shelf; I'd even kill my baby. I had also had a few inklings from readers that had given me pause. It seemed that their associations with a silver cup didn’t evoke exactly what I hoped for. I was determined to treat the editorial request in a rational way, to not feel I had to defend my cub.

So I did what nerds do. I researched. Hooks and titles. All the articles said what I’d read before: there are no hard and fast rules about choosing a title. There are only suggestions. Presumed rules have been broken, resulting in both successes and failures. There’s the hypothetical rule that titles shouldn’t be more than three or four words long. But what about Men Are from Mars, Women Are from Venus? I mentioned to the editor that it’s been said that the title of a nonfiction book can simply intrigue, as long as the subtitle explains, which was my thinking in the case of The Silver Cup: My Journey From Loss of Faith Through Exile and Beyond. Marty kindly agreed that that is one option.

Next I did what writers do and contacted fellow writers and a couple of other readers, asking for feedback. They responded quickly to my ideas for change, choosing favorites, offering suggestions of their own, and reflecting on the function of titles. Then I faced the perpetual dilemma of how to use conflicting feedback. I made a list of six titles and subtitles I could live with and wrote the pros for each in blue, the cons in red. I asked Marty to brainstorm them with me, sent him one additional opinion, and we settled.

TO DRINK FROM THE SILVER CUP: FROM FAITH THROUGH EXILE AND BEYOND

I’m pleased, and the folks at Terra Nova Books are pleased because the title is a little more explanatory, and the subtitle a little shorter. It’s similar enough to the original that I won’t lose the name recognition I’ve been working so hard to build. Moreover, the title continues to reflect the importance of communion in my journey—both the sacrament and the embrace of community.

I'd love to hear what you think of the new title.

Thank you for that ringing endorsement, Monica. :-) More to the point, thank you for all the times you have read it. There is a special place for you in my heart.

I know I haven't been part of the earlier discussion and I'm fine if you tell me it's too late, you don't need this, just shut up. But I think something like "Sipping from the Silver Cup" or even "Drinking from the Silver Cup" would be more evocative. The word "to" stops me short; a gerund, in contrast, moves the action forward.

So interesting, Edie. Thank you for weighing in. I have always had such difficulty with feedback because it is NEVER uniform, ALWAYS conflictual. What is most interesting to me about your suggestion is that I have had other readers (at other times) comment that beginning with a gerund (which I did in some much earlier title ideas) gave a title a weak start. It IS too late. The publisher was very late in suggesting that we visit the title--2 days before it had to go to the distributor for the catalog! So it is now a done deal. I asked people that I knew would respond quickly and it slipped my mind that you usually do.

I like the new title--it does what I have been arguing all along: create a question without supplying the answer. I have never heard the phrase "Kill your babies" used to refer to changing titles but only in reference to bringing harm or death to favorite characters (and I've always called them "darlings" rather than babies.) But now you have expanded the idea! Yay!

I actually like this title better than the original, Anna! It implies that 'to drink from the silver cup' is your goal throughout this journey, to be included. It kind of gathers us all in from the very beginning. At least that's what I think!

Thanks, Linden. You taught me something about asking a question and letting the book answer it. Thank you.

Killing babies--not just titles but any phrase, metaphor, story, subplot--something I treasure but finally accept that it takes away rather than contributing to the whole. Glad you like the idea. Not mine, of course.

Thank you, Paula. I like it better, too, but I had to let go of my attachment to the original in order to get to this. A value your validation of the new title.

No Internet and so couldn't respond until now.I like the new title as well, Anna... hope it does well for you.

Thank you, Wayne. I think it will.

Yes, I am good in a pinch -- when given a deadline/specific request for help I usually respond! Anyway, I'm glad you don't hate me for my belated weigh in and glad to know that others had a different take.

You ARE good, Edie. And I thought in the middle of the night about your title, where, because it has so much overall punch, even if an initial gerund could be a liability, it certainly isn't in the case of *Getting Naked for Money*! Once again, no hard and fast rules.

Like it "way more better"! Clearer and reflective of being a memoir not a mystery.

So delighted that you like it, Janet. Thanks for commenting.

I like the new title better too. And I'm not afraid of the gerund. I agree that it indicates a sense of longing, as in 'oh, to drink from the silver cup!' The reader will see that in the young Sally who wanted to drink from the cup at an earlier age than most, and in the older Anna, exiled from drinking the cup and all it represented. The shorter subtitle is much better too. Can't wait to get this in my hands.

Thanks, Pat. I'm glad you like the new title even better.