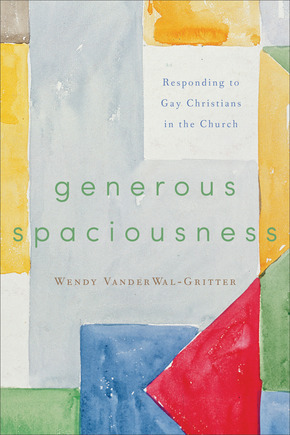 I hesitate to call this a review, as it is really more a heartfelt response to a life-altering book. First of all, don’t you just love the title? Generous Spaciousness. It evokes images of wide open, welcoming arms; bowls of delicious, hot, nurturing soup and homemade crusty bread; love unlimited. Hospitality. In fact, hospitality is one of the cornerstones of what Wendy Gritter has termed generous spaciousness.

Generous Spaciousness is one of those books that I—yet again—wanted everyone in my family to read. There have been a few over the years—ones I thought could ease their minds and hearts, ease things among us—not just between them and me but between them and others in the family because there exists a great divide in my family over the rightness or wrongness of living one’s life as LGBTQ. Within the family, I stand in one place, for many years alone. Now there are some allies—two of my brothers, and if I’m not reading him wrong, a third. There are several in the next generation, including one out gay man and his husband. And there are those who are adamantly in opposition to anyone who does not believe that gays must live celibate, basing their disapproval on biblical grounds to the extent that they will not associate with family members they see as being on “the other side.”

Is the Homosexual My Neighbor was the first book I wanted everyone to read. That was in the 70s and it offered a different way of looking at the seven passages in the Bible that are used to condemn living as gay. Recently I read Mark Achtemeier’s The Bible’s Yes to Same Sex Marriage, and it is so clearly written that I had a hard time seeing how it could fail to change minds; again I wished my family would read it. But this one, Generous Spaciousness, isn’t about them changing their beliefs about living one's same-sex sexuality. It is about being able to live in harmony despite theological differences on any issue but particularly this one.

One reason I loved Generous Spaciousness so much is that I have long held a goal of being a bridge among people in conflicted positions. It’s why I trained to be a mediator and loved how powerful conflict mediation can be. I’ve dreamed of writing speculative fiction, rewriting the history of a real-time war, where troops of mediators parachute in to help factions listen and talk to each other. It’s why, at one time, I ran a blog called “Bridge People” that celebrated those whose actions bridged the gaps between people of opposing views and ways of life. It is, to me, about binding up the wounded, bringing the gospel of peace. And it is what I see generous spaciousness being about—about binding up the wounds that are tearing the church apart, bringing the gospel of peace to churches and families divided. Bringing God’s Love Without Condition, God’s Hospitality, to those who seem to have forgotten how to practice it—often on both sides of the issue.

Although Generous Spaciousness advocates exactly that—making space in the conversation for all points of view, Wendy herself is openly and unabashedly affirming of LGBTQ people. It wasn’t always that way. She tells about a conversation she had with an agnostic coworker before she attended seminary. Wendy was lamenting that the church wasn’t more welcoming of gays. Her coworker said, “But you believe the Bible says homosexuality is a sin, right?” She added, referring to gays, “They won’t believe you care about them as long as you believe homosexuality is a sin. You can’t have it both ways.” Wendy said that was a question that would haunt her and “tear at her heart.”

After seminary, she took a position as the director of New Direction, an ex-gay ministry. Ex-gay ministries are organizations (often affiliated with the now defunct Exodus International) that attempt to transform LGBTQ people into heterosexuals. As Wendy listened to pain-filled story after story from gay Christians about how the church had often shown them the back door, how they had wrestled with scripture, how ex-gay ministries had led them to focus nearly all their energy on trying to live as church tradition taught, she suffered a crisis of conscience. She spent sleepless nights begging God to show her if she was wrong to be counseling gay Christians to a life of celibacy, especially when she was not sure she would be able to live such a life herself.

As result of Wendy’s personal struggle, New Direction changed direction and became a safe place for LGBTQ Christians to be nurtured and grow in celebration of all of who they are—gay and Christian. And Wendy wrote Generous Spaciousness and now conducts workshops over Canada (her home) and the US, helping churches to engage in the difficult conversations with humility, love and hospitality.

Generous Spaciousness acknowledges the complexity of how Christians view and respond to same sex sexuality, which, in my view is where generous spaciousness comes in—being able to recognize that there is a spectrum of positions that need to be part of the conversation, if engagement is to be genuine. Wendy neatly summarizes the spectrum: If a Christian views same-sex sexuality as sinful rebellion, the solution is repentance. If it is seen as addiction, the response would be abstinence. If same-sex sexuality is brokenness, the church may offer accommodation. If it is viewed as a natural human variant, the response is to celebrate it, just as the church and society celebrate heterosexual sexuality.

Generous Spaciousness—to return to my initial metaphor—is not a bowl of weak broth accompanied by a slice of white wonder bread. It is a meaty book that explores serious questions with a potential for messiness. Questions such as: What is our image of God? Will God meet my needs? Is God fair? What is the role of scripture? How do we read scripture? Is singleness a vocation or a command to some and not others? Are we meant to have a solitary relationship with God or a relationship supported by community? What is the difference between law and justice? Is our understanding of the Bible all interpretation, or is some of it crystal clear so no questions need to be asked?

I found the discussion of all of those questions immensely satisfying, but my favorite chapter is called “A Disputable Matter?” and the question mark is part of the title. To me, this question lies at the heart of whether Christians in conflict over the expression of same-sex sexuality can live in unity that welcomes diversity. As Wendy explains in some detail, the biblical history of disputable matters is found in some of the Apostle Paul’s letters to early Christian communities. The congregants were in conflict (apparently some of it quite bitter) over certain issues, which Paul said should be left to each individual’s conviction of conscience. Wendy quotes him from Romans 14, “Forget about deciding what’s right for each other. Here’s what you need to be concerned about: that you don’t get in the way of someone else, making life more difficult than it already is. I’m convinced—Jesus convinced me!—that everything as it is in itself is holy. We, of course, by the way we treat it or talk about it, can contaminate it” (Message).

What follows is one more discussion of muscular questions: Can same-sex orientation be considered a disputable matter? Should we discuss disputable matters? If we do commit to discussing them, what are the rules of engagement? For the conversation to be fruitful, the overarching principle, the principle of generous spaciousness, requires the establishment of a safe environment. This means, according to Wendy, that “no one in the conversation is going to be written off as not caring about the truthfulness of Scripture. Nor will the conversation be marked by an agenda-driven attempt to proselytize others by promoting one particular position. The question to be explored is not which position is correct but rather whether or not Paul’s admonishments concerning disputable matters might be applied” to this issue that is so divisive today. All of us need to be prepared to say, “I could be wrong.”

Not too long ago, I had a conversation with someone who held strongly that living one’s minority sexual orientation is a sin that, if continued unrepentant, could lead to eternity in hell. In the course of our discussion, in which I held that it is not a sin to live fully and abundantly as God created me, I said, “But I could be wrong. Do you think it’s possible that you could be wrong?” The man said, “Yes, I could be wrong.” I felt that my saying it first enabled him to say it, too. When he did, I felt such a release, such a moment of harmony with myself and with this man, whom I didn’t know well. This is the simplest reason that I wish my family would read Generous Spaciousness—so we can say to each other, “I could be wrong,” and go on to find unity in what we still share—the unconditional love of God. Is it so much to ask of people that I spent every day of my life with until I was seventeen, people I love dearly, that they say to me, “I could be wrong”?

Thanks Anna, for this wonderful analysis. I'm working on reading General Spaciousness. Being laid up after knee surgery has given me a lot of time to read and think. I told you I had trouble engaging at first. Decided to pick a chapter that seemed most enticing. Curiously I picked your favorite, "A Disputable Matter?" and connected right away. Maybe I should approach more reading that way! (More later - much stimulation for thinking and self examination.)

So glad you found a way in, Rick.