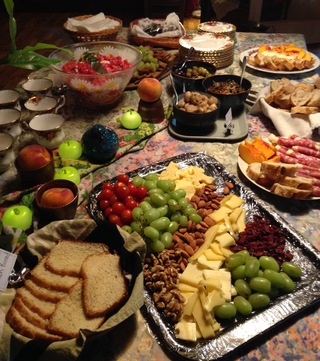 Sunday, August 21, saw me with a group of ten friends in the gorgeous rammed-earth home of my friends Pita and Dick McDonald in the Nacimiento Mountains. I’ve known Pita and Dick since Cheyenne joined Pita’s after-school Poetry and Drama class when she was in third grade. That was when we lived in Cuba, New Mexico, and the year was 1993. Pita was Cheyenne’s enormously creative teacher for the next two years, and became my colleague when I joined the Cuba Elementary and Middle Schools as the counselor. When Pita heard about my book tour, she immediately offered to host a reading, and it became my first one for To Drink from the Silver Cup.

We are in monsoon season in the Southwest, and Sunday was a cool, rainy day, but Dick and Pita’s hand built home has a warmth of its own, even when the woodstove isn’t lit. Pita had prepared a spread that was fit for a famous author. Some of the friends I knew well—one of my writing partners from the Cuba days, my beloved principal from Cuba Elementary and Middle Schools, a fellow teacher and author, and people I’d met at Pita and her sister Sib’s fabulous White Elephant Christmas parties.

We chatted over the spectacular food, and then Pita introduced me. At the Festival of Faith and Writing in Grand Rapids, I had read the entire Prologue, which is, in my estimation, the most dramatic of the chapters in the book. However, this time, I’d decided to try to give more of a sense of the story in the form of short teasers. It’s all a learning process, and from the feedback I got afterwards, this was a really effective approach and one I think I’ll continue.

I think because these were all people who knew me, though not necessarily my story, they felt free to comment between segments, which made the event both relaxed and meaningful. After this experience, home readings could end up being my favorite venue, and I’m very grateful to Pita and our friend Dorothy, who helped pull it off.

Pita and Dick are some of the greatest hosts around, making “Mi casa es su casa,” a statement of fact. I’ve spent the past three days here, staying in my van in their driveway, sharing meals, great conversation, long forest walks and getting to use wifi. On Thursday, I’m off to Tse Daa Kaan, also known as Hogback, just outside of Shiprock, making a brief stay in Aztec en route.

I love that you're already learning about audiences! Of course, friends may be slightly different that strangers, but still? Traveling mercies. Lis

Thank you, Lis. The feedback came from folks I don't know well, so I think I can trust it.