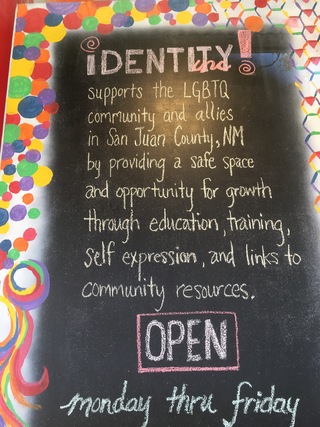 October 8, 2016. I guess a town of 45,000 qualifies as small. That was the population in 2013, and it’s probably smaller today because Farmington, NM is a town that enjoyed a boom because of oil. With gas prices down, the town is currently on a downward trend. It was the unlikely location for my first LGBTQ book event. After lunch with my friend Gloria at the Mikasa Asian restaurant, I strolled through Farmington’s downtown, which looks something like Downtown USA, except for the fact that some of the storefront galleries display Native arts. I’d arranged to meet Don, the organizer I’d spoken with, at 2:30. I was just scoping things out a little before 2, but when I tried the door to Identity, Inc, I found it open. Inside a young man with a Mohawk was shifting round wooden tables and chairs in the long, narrow space. “You must be…” he said.

We started chatting, and probably the first words out of Jay’s mouth were, “I have no idea how many people to expect.”

“That’s what Don said, too. It’s okay. Whoever needs what I have to offer, they’ll be here. “ Jay told me a little history of the year-and-a-half-old center—how things blossomed when he got a drag show going, but that participation had dwindled. We started talking about people we both knew from Toadlena, where he’s from. I went out to get the refreshments I’d promised from my van, and we set up a table. When Don arrived, he reiterated his concern, and I reiterated what is becoming my mantra—“Whoever needs what I have to offer…”

Three o’clock, when the event was to start, came and went, and there were still just the three of us. This wasn’t for lack of trying. I had sent notices to Four Corners Free Press, Farmington Daily Times, Tri City Tribune, and KSUT. Don had sent notices to the center’s e-mail list of 200, and Jay had posted several notices on two FaceBook pages. Don had also alerted people he thought might especially be interested. They were, but to a person, they were going to be out of town for the weekend. As time moved forward, Jay tried two more things—he made a video of us waiting for an audience and posted it to FB, and he put a sandwich board on the sidewalk. Finally a young woman showed up, but no, she was there for something else. Then her mother walked in. A little later the landlord and a young man who was there to meet the young woman also showed up.

So were these the people who needed what I had to offer? If I’m right, and I believe I am, they were. Don and Jay and I talked at some length about what it takes to get an organization like this off the ground in a town like Farmington—read small red town in a blue state. Don says LGBT people are still wary of being public about who they are here. He says the most successful thing they have going is a youth support group that gets lots of referrals from schools and other community organizations. What did I contribute? I listened. I shared some of how it was when I co-founded the Lesbian and Gay Coop in Albuquerque in the seventies. We talked about the critical need to develop a good-sized core. They told me about Farmington’s first Pride Parade, held this year. I told them about Albuquerque’s first Pride Parade—about 40 years ago. Maybe I was just there to offer a little encouragement.

The mother and daughter hung around for a bit, and the mother told me about Mormon family members that have a lesbian daughter. I said they might want to read my book because there’s a lot in it that Mormons could resonate with. The daughter took a postcard. Maybe I was there for them. I left a raft of postcards for the center to display and give out. Don bought a book. When he reads it, he will think of someone else who will want to read it. Word of mouth is still the best way to sell books. That’s what THEY say. I donated the leftover refreshments to the center. Maybe that was why I was there—to offer the most basic nourishment there is—food.

By request from a blog subscriber: My next stop will be Albuquerque for events on October 23 and 26 and November 5. Go to the Events page on this website for details. After Albuquerque, it’s the Generous Spaciousness Retreat in Hope, British Columbia.
6 Comments

It is hard - but it is not for us to know how or when the seeds we sow might germinate and eventually bear fruit. Yes - those were almost certainly the few people who needed to be there. Blessings -

Thank you for that encouragement, Kathy. It was a good experience.

Farmington does still feel like the 70's, and I do forget that much of the USA hasn't really changed that much outside the urban areas. This is a thoughtful column, and makes me think.

Yes, Anna, my bravehearted friend, I guess so it is. Whenever you open your door and your heart, you do not know who will show up - and the mere act of inviting your fellow sisters and brothers to share with you will vibrate and will send energizing little lights to be seen in any darkness :-)

Thank you, Diane. You more than many, have an eye into how so much of small-town and rural USA are still in the 70s. It does give one pause.

Thank you so much for your encouragement, Tina. And I do like being called brave hearted! I do believe this about sending out the light. Remember my Yogi tea tag: "Travel light, live light, send light, be the light." I try to live by that.