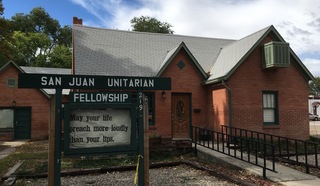 BOOK TOUR JOURNAL 12
AN AUDIENCE OF ONE

My first event in Farmington, at Identity Inc, brought in the organizers on purpose, then a mother and daughter “by accident,” the person who was meeting the daughter, and the building’s landlord. Six people, four of whom I conversed with. The second event, the next day, was held at the San Juan Unitarian Universalist Fellowship, which meets in a sweet little red brick bungalow on Orchard Street. The building reminded me of the red brick house that was the Farmington library when I was a child, dying for books.

There I had an audience of one, the organizer, Judy Cline. As we arranged a chair for me to sit on and another to hold books for sale, she kept apologizing and hoping for more people. “Several people said they were going to come, but this morning at the service, they said they couldn’t come.” I kept reassuring her that whoever needed to be there would be. And the whoever turned out to be Judy, an audience of one.

Good things, interesting things, happen when you have an audience of one. Conversation happens. I already knew that Judy, like me, is an Adult Third Culture Kid (ATCK). Her parents were traders in the Navajo Nation bordertown of Fruitland, New Mexico, adjacent to Farmington. ATCKs are adults who spent a significant number of their developmental years living in a culture other than their parents’ culture. The third culture is neither the host culture nor the culture of our parents. It is a culture shared by those of us who’ve had this experience, and as adults, when we meet each other, we discover that we often share many characteristics not shared by people who haven’t had this experience.

Judy and I talked about some of our shared experiences, which, despite the fact that she is a few years older than I am, were fairly similar. Also, my earliest years in the Navajo Nation were spent in Shiprock, Teec Nos Pos, and Beclaibito, very close to Fruitland, so we had common language, common place.

Somewhat hesitantly, because it could be a little awkward, I asked if she’d like me to read some passages to her. She laughed about being an audience of one, but she was also enthusiastic. Judy was a wonderful audience, making noises both appreciative and sympathetic and adding at times her own experiences of growing up around sheep, sharing stories about her grandfather building a swinging footbridge across the San Juan River from the reservation to the trading post, about the Navajo name for her father, which came from an earlier fire that had burned his bakery—he was called Burnt Bread.

As I read about my experiences as a young lesbian, Judy told me something she would probably not have shared, had the audience been bigger. She had had a career in the US Foreign Service, part of which happened in Brazil. “There was a young man who was higher up than I was, and he invited me as his date to all these parties and other events where I got to meet fascinating people I would never otherwise have met. I loved going out with him because I got to do these wonderful things and meet all kinds of people. And because he never tried anything with me.”

I knew what was coming. “Of course, I realized later that it was because he was gay, but it was so nice that he didn’t come on to me, and after he was assigned somewhere else, those people kept inviting me because by then they knew me. Of course he was using me as a cover, but it worked to my advantage.”

I’ve heard Judy’s story before from other straight people who, knowingly or unknowingly, served as a gay person’s cover. It reminded me of how often I dated men as a young woman, in my attempts to meet social expectations. My reading seemed to offer Judy an opportunity to tell an important life story. She also talked about how easy it had been to be a single woman in Washington, DC, where she’d worked later, but how much she stood out when she moved back to the Farmington area. “No one could understand a woman who had never married.”

I have since reflected on how many ways we can find ourselves outside society’s norms and how valuable it is to be able to share our experience of that with others. Judy and I laughed a lot with each other. She bought a book, and I’m not sure she had planned to before I read. She thought of people she wanted to share the book with. It seems that when people hear the excerpts I've chosen, they want more. I love tantalizing the reader in them.

Our book group at St. Andrew, Mix-it-up, meets every other month and is still finding its way. Our November meeting fell on the night of the 7th game of the World Series, which Mark and I were watching in Indianapolis. And most of our regulars had other reasons not to come. So one person came. And I knew she had the right idea, when she said she just took the time to sit and read.