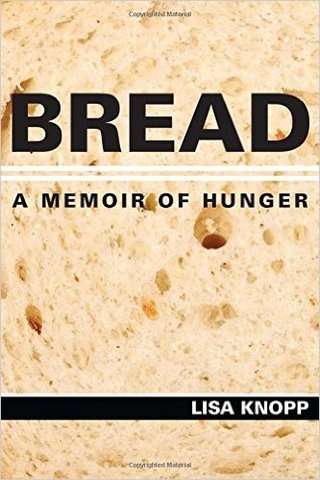 A MEDITATION ON POINTS OF CONNECTION

I chose to read Bread because in a couple of weeks, I will be doing a joint reading and book signing with Lisa Knopp at the University of Nebraska/Omaha, where she teaches. Since her previous five books have been on nature, I was a bit surprised by the topic of Bread, which is, in the vein of Joan Didion, a journalistic memoir; in other words, the book is both highly personal and contains a significant body of research on its subject. That is not an adequate description, however, because the book is also very much a spiritual memoir. The subject matter is what Knopp calls her malady—disordered eating. When I bought the book on Kindle, I did not plan to write a review; nor is this a review. It is, as the title says, a meditation on some surprising points where To Drink from the Silver Cup, or by extension, I, connected with Lisa’s book.

The points of resonance surprised me, not because I don’t have issues regarding food; it’s nearly impossible to grow up in US society, especially as a girl and woman, and not have disturbances in our relationships with food. I related to some of Knopp’s strategies for curbing bingeing and for restricting, though not as powerfully as with some other areas that support her main subject. I also found the research she covers to be informative.

On the surface, and even in their deeper layers, our books might seem very different. In fact, the colleague who set up our joint reading, Jody Keisner, was surprised when I mentioned that I had found commonalities. The first thrill of recognition came early on, as I read about Knopp’s First Communion. The importance communion held for the author continued to be a thread throughout the book, as it is in mine. Her deep hunger is not only for physical bread, but even more for spiritual nurture, for faith community/communion, and for social justice in a spirit-led context; in this, it parallels my longings in To Drink from the Silver Cup.

Any book that I respond to strongly necessarily contains multiple points of connection, and Bread was no exception. Knopp found that single mothering helped in so many ways to provide balance and a bottom to her previously bottomless hunger. The calling to mother was partially responsible for a twenty-year remission from her malady. When I wrote about my time in a Twelve Step Program, I told how having to show up for my toddler daughter kept me from replacing my addiction with excessive obsession on recovery. Parenting is itself a spiritual path, our children being our teachers, and all that’s required of us insists upon balance if we are to have a more or less healthy life. There were also small touchstones, perhaps meaningless in the big picture, but delightful and personally affecting—such as the fact that her parents and mine share the date of their wedding anniversary.

Both Lisa Knopp and I have had a lifelong romance with books and writing. And as with any romance, we experience desire, fulfillment, inevitable periods of doubt, necessary self-reflection, and sometimes rejection and loss. The desire is to write well, to express faithfully, to touch others, and it is always present. Writers who take our work seriously are always reflecting on our process, on whether it meets the goals of our desire.

As I neared the end of the book, I saw that as she wrote Bread, Knopp’s process was much like mine. It became clear to me that the book was not only a story of what had happened in the past. She was still living the tale as she wrote it, and that was true for me too, as I wrote Silver Cup. While I conducted the experiment recounted in Part III, I was writing Parts I and II. Even Part III, right up through the Epilogue, was taking place in Church Journal and then on the page, as I wrote. Knopp was making meaning of her experience, questioning her reliability as an observer of her own progress, on through the last pages of Bread. And it was in the very last pages that I read the scene that touched me the most deeply. It is the scene of a deceptively simple ritual—eating a slice of grainy brown bread with a glass of water by candlelight and with awareness and intention, a repeated ritual of healing.

Dear Anna -- I ordered your book a few days ago and am waiting for it to arrive. But after reading your meditation on the connections between our stories, our books, yours can't get here fast enough. I'm eager to read about your spiritual journey! Thank you for these thoughtful reflections. I appreciate that you've given me a name for what I've written (a journalistic memoir). And how cool that our parents have the same wedding anniversary. All best to you!

Thank you so much for ordering my book, Lisa, and for your eagerness to start reading. I'm glad you enjoyed my reflections on our books' commonalities. That our parents have the same wedding date, though mine came several years earlier, is fun, I think. Looking very much forward to our meeting. Anna