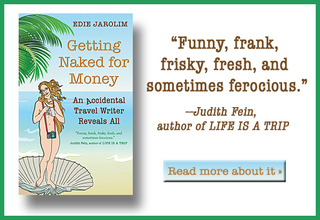 Check out Edie's Website
Edie Jarolim and I have never met in real life, but we've exchanged a lot of ideas, resources and support as we both made decisions about how to get our memoirs written, published and publicized. Edie's hilarious, courageous and informative book, Getting Naked for Money: An Accidental Travel Writer Reveals All, was released in October, 2016. Besides being a memoirist and travel write with a load of impressive credits, Edie also writes about food and animals, especially dogs. She will teach a five-week class on memoir writing at the Jewish Community Center in Tucson, beginning March 8. She asked several friends who've written memoirs to write blog entries on their most difficult problem while writing their books and how they solved them. My essay posted this morning and is reprinted here with Edie's permission.

Packing for a trip? I have flat zippered bags for different categories of clothing—one with neat rolls of underwear and socks; another for tank tops, also neatly rolled; and a third for tees. Trousers and pullovers are rolled along the sides of the duffel, and each trip has its color coordination for versatility.

My desk? There’s place for everything, and everything in its place. Sure there’s always a pile of papers and folders on one corner, but it’s neatly stacked, and until I get to filing, I know what’s in it. Moreover, I cover my desk with a long blue cloth to protect the contents from the omnipresent high desert dust.

And yet! Organization always poses a conundrum when I begin to write something larger than an essay. Sometimes it even happens with essays. How to order my memoir, To Drink from the Silver Cup, was no exception.

I have known since I was nineteen that I would have to write this book in some form. About fifteen years ago, I penned a 400-plus-page version of it that simply didn’t work. That version combined my extremely conservative religious upbringing with the problems of coming out lesbian with growing up as a white girl in the Navajo Nation. When a very astute reader commented on the manuscript, he said he didn’t think the sexuality and religion combination worked, even though the connection was obvious. Although he was usually spot-on in his assessments, that didn’t ring true for me, but I still couldn’t pinpoint the problem.

Four years ago, I once again launched into the same project. This time, I took myself on a three-day retreat to a relatively inexpensive hotel suite about eight blocks from my home. Not having the regular responsibilities of home life was more important than being in an exotic location. In that suite, I opened Tristine Rainer’s Your Life As Story. I have read and exercised my way through many books on how to write; Rainer’s book is to me the best there is on prose writing. Hands down. It is instructive rather than prescriptive, and it is a pleasure to read.

As I worked through some of the exercises, I quickly realized that the problem with my previous manuscript was that I had tried to pack two books into one. So the first organizational solution had to do with narrowing my focus, something I’d told writing students time and again. I found it quickly enough: I would keep the spotlight on my spiritual journey. Categorizing the memoir helped to further identify the book’s core.

The next pressing question was where to start, and Tristine did not disappoint. Through an exercise in which I wrote my life as a short fairy tale, I knew that I would start with the inciting incident, which took place when I was sixteen. From there, I would flash back. Then came the organization of the entire book—what Rainer refers to as “how you slice it.” She offers several lovely metaphors, among them the thread on which individual pearls are strung, my eventual choice.

A few readers have expressed mild disappointment that certain aspects of my life weren’t covered in the text, but I knew that maintaining a rigorous focus was of the essence for me. After all, when you reach a certain age, you’ve accumulated many pearls, and I’d learned from experience that the grab-bag approach didn’t work.

interesting and helpful - thanks!

Wow! this is so interesting and really helpful! Even tho I'm not planning to do a book, I still need these insights for my weekly writing. Lis

This was so interesting Anna. I likened it to how I one day realized a house is many parts, such a surprise to me! I imagined it just a completed home a mystery. Your essay about your book writing and the steps to your published memoir makes it seem so possible - not easy!
love, janet

Diane and Lis, I'm glad you found this helpful! And interesting besides.

Janet, what an interesting analogy--a book compared with a house. And yes, it is possible! But of course organization is only one part of it.