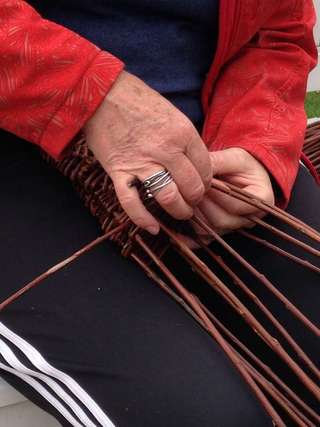 In September, 2015, I interviewed my friend Tina Kragh Rusfort in the village of Vester Skerninge, Denmark. I posted the interview in four parts in May, 2016, followed by a piece on a painting of hers that hangs in my living room. I'm reposting my interview with her because it will be followed by a new interview that represents a companion piece to this one. And because what Tina has to say about spirituality and creativity is of value.

“How did you experience your spirituality as a young adult?” I asked next.

“I experienced it as connected to creating. I had my special, sacred place with my paintings. To paint I needed to be alone, so I set up a nice area with a high quality of aloneness. I loved my colors. I fell in love with them when I was making them wet. So they would be ready for the alchemy. I would surrender to them, making a draft with pen. Then I would let the color talk because it would translate my feelings, so when I concentrated on one area of the motif—it might be a young couple or a woman in the garden—I wouldn’t control it. The motif would tell me its story. I had a lot of those pictures. Wet and wet.”

I was fascinated, though not at all surprised, since I’ve known Tina for a long time, by the interplay of imagery and spirituality in her life. I asked if there was more.

“Privateness,” she said. I wouldn’t know how to share my feelings in words. Because I’m very sensitive and I have a lot of imagery. I expressed it in pictures. I wouldn’t know how to share from my secret, sacred place in words. It was really sacred and secret. In that privateness there could be a tendency to feel isolated or alone in my experiences.”

Tina paused, as if pondering her last words, so I asked, “Was that okay?”

“It could be, it was a condition, vilkår. I used the pictures to express my experiences and reflect, but I also saw that I didn’t have a friend or grownups to share this with. I first shared some of my paintings in an exhibition when I was nineteen. That was very overwhelming. Because then people could see who I am. The paintings were very honest.”

“Did you feel ambivalent about being seen?”

Tina smiled. “I liked being seen, and I liked it when people said they liked my pictures and wanted to buy them. But it was a little like coming out from a secret place, with a light shining on me. But the only words, were what other people said.

“Before that it was like not being known, not being mirrored in the deepest place in my being. So the exhibit felt vulnerable. I wondered, ‘Would I be loved for what people saw?’ It was very personal, from my inner life, very exposed. But it was well received.”

“So in a sense you felt your were loved?”

“Yes. I didn’t even understand the pictures myself, so I didn’t know what was in this treasure box. I just knew it held my personal jewels. If people asked if I could paint them a picture, I would say no, because I only painted from necessity. It was part of my soul communication.”

Since Tina and I met through yoga, I asked about the role yoga has played in her spirituality.

“My first experience of yoga came through my sister. She was doing yoga at home when I was thirteen, and she taught me a little. At sixteen I started gymnasium (high school). There was a girl in my class who went every week to study yoga in the city of Odense. She wanted me to come along. I was seventeen by then and went to yoga classes there for two years. The teacher also trained yoga teachers, and my last year of gymnasium, he asked if I wanted to be his last yoga teacher pupil. I liked him a lot, and we had a great connection, but I wanted to travel and see the world. I felt like I was a volcano after three years of books. I knew I couldn’t stay in Odense for another three years.

I asked, “At that time, did you experience yoga as part of your spiritual path?”

“Yes,” she said. “It was about the harmony that yoga gave me. But if I have a task in the world, something to share, it has to do with aesthetics. The question about becoming a yoga teacher was, ‘Is this how? Is this the form that my sharing should take?’ My restlessness said no. I couldn’t stay.”

“Did you travel then?”

“Yes, I traveled for a year, and I spent six months of that time in England. I came back for a while to Odense—working, sorting out the world and its opportunities and shapes. Then when I was about twenty-five, I went to the Scandinavian Yoga and Meditation School in Copenhagen. I liked the yoga there, and I wondered again (this was after my education as graphic designer), ‘Am I supposed to be a yoga teacher?’ I also questioned my work as a graphic designer because of the values in working with big customers. I felt unsure if this was my task.”

“What answer did you receive?”

“After a year when I did yoga pretty much every day at the yoga school, I moved into the ashram and continued working in graphic design. Eva, who was my favorite teacher, asked if I wanted to be a yoga teacher. I asked her, ‘Can I still work in graphic design or do I have to give up everything and just learn to be a yoga teacher?’ She told me it would be the latter. But when I asked Eva, ‘Tell me more about it. What will it involve?’ she gave me a vague answer, and that didn’t appeal to me at all.”

The yoga teacher training at the Scandinavian Yoga and Meditiation School is rigorous and takes several years of theoretical and hands-on study. It requires living in an ashram, often being moved from school to school around Scandinavia and Germany. When the trainees are not doing or teaching yoga or meditation, they are doing karma yoga (service), so it is basically an all-consuming undertaking.

“Over the years,” I said, “you’ve continued with yoga and meditation.”

“Yes,” she said, “I always felt connected. Once I had a levitation experience, being in my astral body, not my physical body. I couldn’t move or leave the yoga room. I was aware that people were leaving, but I was not in my body. I was only able to leave when the teacher touched me. That strong experience gave me a lot of energy. It helped me because I had gotten very depressed when my grandmother died. I think that was when I discovered that I wasn’t meant to live on my own in a flat—that I needed to live in a community. That was a year before I moved into the ashram. I was definitely seeking. Daily yoga helped me out of that depressive state. It was like coming home to my body.

“How would you say yoga has affected your spirituality over time?”

Tina looked up from her weaving. “It is my motorway to my inner self. It always works, so I trust it. It’s very important. Not that it’s easy. It’s more like, when I engage in it after being away for a time, discipline is returning, coming back into my life. Doing the same thing every day isn’t easy for me—just doing it. So I forgive myself that I haven’t been doing it, and then I just come back.”

I was reminded of my first--and only--levitation experience while attending a class at the First Unitarian Church in Albuq. It was a unique experience. We were instructed by a young man who was a substitute for our regular instructor. We were told later that he received some kind of rebuke by his community for revealing some instruction that we should not have received?? I did not follow through in any way, but I've never had such an experience ever again. I still can feel the dark rainy night and the feelings of both aloneness and community with the class. I didn't want it to end.
vel

I'm so glad of your meaningful experience, Vel, and grateful to you for sharing it here. That experience of both aloneness and community--so human.