A HARD TIME IN THE BAY AREA 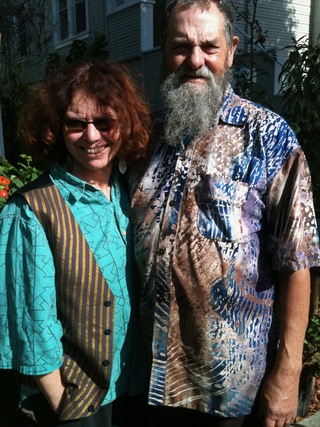 Briana and Peter. For photos of their recycle art, click the link.
I dearly love the San Francisco Bay Area. I have lived in all three of its major cities: San Francisco, also just referred to as The City; Berkeley; and Oakland. It is a place of great magic and beauty. And memories. And some of those memories came up to whack me from behind on this trip. I’ve always looked forward eagerly to return visits in the past. But not this time, and I was hard put to figure out why. I just knew I didn’t really want to leave Albuquerque, which is not my favorite place, to come to one of my very favorites.

I came up with some reasons, but they didn’t really explain my reluctance. On July 6 I flew into Oakland and met up with Sarah, my Bay Area host and good friend and colleague from Western Michigan University Creative Writing days. We chatted nonstop all evening, much of the time talking about writing projects, as we always do. But the next morning, I didn’t want to get up and enjoy all the places I love—would it be Nabolom Bakery or Arizmendi? Would I walk around Lake Merritt? Stop in at one of the Peet’s Coffee Shops?

I was curiously resistant to doing any of those, but finally at 10 a.m. (practically unheard of), I forced myself out of bed. There was no getting around going out because I had to make copies of handouts for my writing workshop the next day. I took a little time to drink a mug of English Breakfast and write in my journal, and that’s when things snicked into place.

It was last October, shortly before I would leave for my first book event outside the Southwest, that I got an email from my friend Briana’s son Bear. I’d been wondering why I hadn’t heard back from her about my proposed visit to the Bay Area in January. I was shocked to learn that she’d died two months earlier of very fast moving breast cancer. I couldn’t attend her memorial gathering in November, because that was when I’d be conducting workshops at a retreat in British Columbia. Now, on this rescheduled tour, I would be visiting Briana’s son and her partner Peter. Before leaving home, I knew it would be a hard but hopefully also good visit.

What I realized as I wrote and drank my tea was that Briana’s and my friendship had taken place all over the East Bay and over the span of thirty-six years. Sarah’s apartment looks out over Lake Merritt, where Briana and I sometimes walked the three and a half-mile circumference, stopping along the way for a swig at a Mediterranean juice bar. We often walked the trails at the Berkeley Marina together, always talking with great animation; Our spirited expressions were ever inspired by Briana, who was one of the most vibrant, alive people I’ve ever known, and that made her sudden passing without my knowing she was ill all the more shocking.

Memories crowded in—our first meeting at the residential nutrition study that I participated in at Cal Berkeley. Visits later to her apartment on Benvenue from whence we went for pastries at the best bakery in the world—Nabolom. The place on Matthew, where I hammered a few nails and learned to drink Caffix with Berkeley Farms half-and-half. The houses in Emeryville and Covelo and out on the land in Mendocino County. Every place that Briana ever lived was chock full of her and Peter’s recycled metal art and literally thousands of finds from flea markets—an endless feast for the eyes. There were times, too, when Bee (her nickname) and Pete visited us in Albuquerque and our amazing meet-up at the Oregon Country Fair. So many times I sat with her in one of her many booths—many more times than I had thought—at the Women’s Craft Fair at Fort Mason Center, hers and Pete’s at the Marin Farmers’ Market and the Oregon Country Fair. We did the Ashby Flea Market together years ago and visited the Marin Flea Market then too; she and Peter sat with Cheyenne and me at the Albuquerque Flea Market at the butt crack of dawn in the fall. I always came away from our visits with earrings and small sculptures—some as gifts and some as purchases. I tried and did give in return, but also always felt I fell short. Briana was simply larger than life, a woman of great spirit, dedicated to the Mother. We broke bread together again and again. I took care of Bear when he was a baby, and she taught art to our foster son. She affirmed my love of things Jewish and taught me about dedication to the Goddess. I discovered Bay Area eateries through Bee—the hole-in-the-wall, no name Chinese place on University Ave in Berkeley, the Mediterranean on Telegraph, the Cheese Board on Shattuck, Nabolom of course, Doyle Street Café for breakfast, and Edible Complex where Bee taught me to eat desserts left by other patrons when we were that poor. We job-shared as hospice caregivers. And it was Bee who drove me to the Oakland airport for my first trip to Europe, her old Volvo sedan flying off the lip of the Berkeley Hills, into the air and down to the flatlands. Years later I returned the favor, making a last minute rush for the Southwest Chief with her and Peter and their many baskets and bundles to heft on board at the last minute. It wasn’t all sweetness between us. A woman of passion, Bee was much better than I at confronting something that made her angry, and in the hole-in-the-wall Chinese place, she let me have it when I had brought up some banal dissatisfaction. All was forgotten when I got pregnant with Cheyenne, and Bee gifted me with little crocheted caps that Bear had outgrown. There would be thirty years of sisterhood after that one outburst.

Memories assail me at every turn, and I grieve the loss, not only to me but to the world—the loss of someone who gave so much, an activist for many of the causes I believe in, a lover of life. I want to celebrate this woman, and I suppose this writing is a celebration of sorts, but, although I grieved when I first heard, the missing of her comes so much more strongly in this place where our lives touched again and again and again over the years.

A few years back I wrote “Some Thoughts About Funerals” in my Gallup Independent column—about why we go to funerals or memorials—to comfort those who were close, to be comforted by others, to say that someone’s life had meaning, to celebrate that life. I was so sorry not to be able to go to Briana’s memorial. At the same time I was relieved because I was afraid it would be so painful. But I felt bad not to be there for Peter and Bear. It felt complicated, as the death of someone so important to one’s own life can be. Today I am reminded of my column and aware of how essential it is to share our grief as well as our celebration of a life that has been of vital importance to us. I don’t know what my meeting with Peter and Bear will bring. I suspect it will be hard and hopefully also healing for all of us.

such an honest commentary

Thank you, Diane. That comment means a lot to me, really.

So poignant, Anna. Thank you for sharing this exquisite tribute.

Thank you, Catherine, for your valuing of it.

So beautifully written - I almost felt like I knew Bee! What a wonderful tribute to a very special person and relationship, and a heartfelt expression of grief!

Thank you, Kathy, for enjoying Bee and understanding how much she means to me.

Dear Anna, A full-measured tribute, with love and pain, to your significant friend, to honour your friendship. May consolations attend you, surround you.

Thanks so much, Kathy. I did get to meet with Bear and Peter on Sunday, and as could be expected, it was a mixed experience that isn't over yet.

Such a loss for you this deep long-time friend. I appreciate you sharing the big and little details of your journey together.

Thank you, Janet. Yes, it was a long and deep friendship. And the time I could spend with Bear and Peter was so important--good and hard. Thanks for the love.

Thank you for having this post. I just tonight found out when I saw Bear and Peter at another friend's celebration. Of course as everyone says when something is this sudden, I just saw her last year at this same annual event! I live mostly in NYC now, but knew Briana for many years when I lived here in Oakland. I don't know you Anna, but want to thank you for remembering and writing so well about Briana--I just can't quite believe it yet, and I couldn't keep expressing my shock to Peter and Bear so I had to excuse myself to cry...when it was my time to read my poem, I dedicated it to her. I believe we walked across the Golden Gate Bridge in protest of the first Gulf War in '91--well, sorry to go on and on, but thank you for sharing your memories. A very special woman and artist and love warrior, Briana Presente!

Thank you so much, Zigi, for sharing your experience of Briana in life and how you learned of her dying. My heart goes out to you. It is so hard to find out about a good friend's leave-taking after the fact.

I hadn't seen Briana in quite a while, and then a friend told me Briana had died, like a great candle's light going out but leaving the tracings of energy. I almost always wear one of her pins, on coats, sweaters, or sitting sculpture on a window sill. Thank you Anna for sharing your relationship and yes, like you, I will miss her in my own way.
Michael Ann

Thank you so much, Michael Ann, for sharing in our common love of Briana and our grief at learning late of her death. Wishing you comfort.