BACK ON THE HORSE 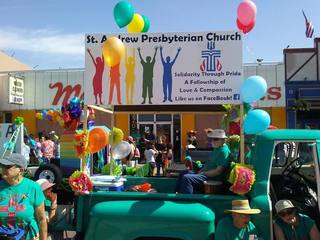 At ABQ Pride 2018, me at bottom left
When I was sixteen, I had a bad car accident that was my fault. To top it off, the Gallup Independent published a photo of the wrecked car with an accompanying story on the front page. Cuts around my swollen lips had to be stitched. I was, at the time, being systematically and severely bullied at school, and after the story in the paper those boys had even more to throw my way. And they did.

My father insisted, not unkindly, that I had to get right back on the horse (in this case into the driver’s seat of the car) and drive. He said if I waited, it would get harder and harder to do so. I did, but for the first few weeks, every time I passed an oncoming semi, I had visions of the car going beneath it, even though the accident hadn’t involved a truck. Slowly I recovered emotionally, and my lips went back to their normal size.

Being on book tour has been a wonderful experience in so many ways. I relished the engagement with people who came to my readings. I was met with amazing hospitality—people who opened their homes to me, took me to see the sights of their communities, told me their stories, made me dinners, and let me go to my room to introvert when I needed to.

Being on book tour was also tiring. It’s tiring to be on, not only when I’m doing an event, but also during the times between events. It’s disorienting to waken in the early morning and not know where I am, to try to get out of bed, only to roll into a wall. I’ve been home now for a week, and I’m still waking and looking at the walls in the dark, seeing the outlines of paintings in my bedroom and having to go through a process to recognize, “Oh, I’m home.”

Seven times since I took To Drink from the Silver Cup on the road, I’ve returned home from somewhere, from several somewheres. Each time I have felt a powerful urge to do the introverting that was never quite complete when I was in other people’s homes. Until this last time, I’ve given in to that urge and isolated and insulated, turning my home into a cave of refuge, going out for essentials, but avoiding any but the most superficial encounters.

Thinking I needed solitude to recharge, I found myself feeling depressed and lonely (duh). The longer I isolated, the more depressed I got. I rationalized that I must be experiencing a natural letdown from all that time spent being on. And continued to slump, usually for several days, sometimes more than a week, all the time righteously thinking I deserved this special time to myself.

This time I was coming off nine weeks of touring with a three-week break between weeks six and seven. My first day back I cocooned myself. I’d gotten back on a Thursday and had long since determined that I would not join my church when we marched in the Pride Parade on Saturday; nor would I go to church on Sunday. But because of some work I’d been doing over the previous three weeks, I quickly realized that, while I definitely needed some recharging alone time, I also needed to balance that with time with others. I called Sharon to find out where to meet up for Pride, and I marched. At the parade, my friend Sally told me that she and Bill, who have traveled more places than I can count, have a dictum: “When we get home, we are to get right back into our routine, the sooner the better.”

I was already feeling better, and knew I’d go to church the next day and made plans to go to lunch with Catherine afterwards. Sally and Bill knew what my father knew: it’s best to get right back up on the horse.

Welcome back! Glad you're back in the saddle, sis! And belated Happy Birthday!

Next year, if you invite me I'd love to join your pride march.

Thanks for the birthday wishes, Rick! And I know we'd love to have you march with us. Thanks for offering!

Hello, Anna: I don't know what day your birthday is/was (I'm assuming in June??) --anyway, HAPPY BIRTHDAY.
Here is my "gift" to you...perhaps you are familiar with it--it is part of a poem by James Russell Lowell that I learned years ago and I still truly like it:

What is so rare as a day in June?
Then, if ever, come perfect days.
Then heaven tries earth if it be in tune,
And over it softly her warm ear lays.
Whether we look, or whether we listen,
We hear life murmur and see it glisten.
Every clod feels a stir of might,
An instinct within it that reaches and towers,
And groping blindly, for light,
Climbs to a soul in grass and flowers.

I'm glad you are "back in the saddle"--getting back in the regular routine, after travel, has been important for me...even though it takes two or three days.

I believe ritual and routine are like glue that helps to bind the moments in this time/space we live in.

Mirakhel, thanks so much for your well wishes and the poem. I know the first line, but didn't remember the rest of it. My birthday is actually at the end of May, but I don't mind having it go on and on!