UPDATE ON A HARD TIME IN THE BAY AREA 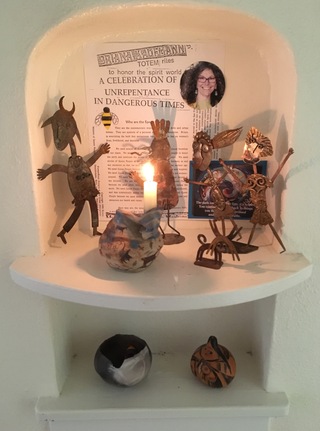 On my last afternoon in the Bay Area, I arrived at the big old Victorian in Emeryville, where Bear and Peter live in two of the three apartments it holds. This was the only time we could meet, working around my book events and Bear and Peter’s time at the Oregon Country Fair (OCF). I wended my way through the riot of plants and trees growing in every container imaginable, and up the back stairs to the deck where I’d sat so often before. The round table was laid in typical Peter fashion with beautifully presented fruits and coconut macaroons. I experienced the feeling that would return again and again during our visit—of everything being familiar but also strange. Briana’s presence there was as large as ever but also deeply absent. Peter said it well, “She’s still here. This is her doing.” By that I think he meant, at least in part, that their home was the result of Bee’s business acumen (she is probably the only artist I know who loved and excelled at commerce) and her wise understanding of giving and receiving the bounty of the Mother. Then he said, and caused us all to chuckle, “She still tells me what to do. The difference is I don’t listen to her as much as I used to.”

We talked of many things—how it went at the OCF, the memorial held there with people who had exchanged art and artistry and fellowship for over twenty-five years, Bear’s work on the creation of carbon-neutral energy production using disposable biomass, the venues where Peter continues to sell his sculptures and jewelry, the memorial held in November in Berkeley, Cheyenne’s work in Denver, Bear’s vermiculture experiment. Bear had gotten out several large boards with photomontages that were on display at Bee’s memorial, and we looked at them together. I asked for a copy of something Bee had written about her Spoon People, and I share a few lines here:

Peter took me to where Briana hung her own earrings, all of them ones I had seen her wear so often. “I want you to choose a pair,” he said. “These were her favorites.” He left me to spend some time on my own. I didn’t think I could carry off her favorites, but I chose a pair that I had loved on Bee. And I felt deeply the honor Peter was extending me. So deeply. He also had me choose a new pair of his making for Cheyenne.

The time was very intense and yet also relaxed, because of Bear and Peter’s graciousness. I was grateful to see Peter’s equanimity, to see how he’s thriving. Bear took me back to Oakland, where I was staying, and we talked then about Bee’s last months. Gratitude is everything I have for being able to spend this holy time with my friends. All three of them.

When I came home to New Mexico, I made a small memorial of Bee’s Spoon People and her words about them, my way of saying goodbye and honoring a life of most precious meaning. Until next time.

Lovely, Anna. I noticed the memorial when we were at your house yesterday, but I didn't take time to linger. What a glorious way to give thanks for Briana.

Thank you, Catherine. I cherish your support.

I have read and reread your last posts. As always I am deeply impressed. Your sharing your experiences re the loss of your friend Briana were most moving. Your honoring of her was a gift to her family and friends as well as healing for you I would guess.
I had no idea that you were a regular contributor to the Gallup newspaper. How interesting.

Thanks so much for your comments, Vel. Yes, I've been writing a column, approximately quarterly on the Religion Page of the Gallup Independent.