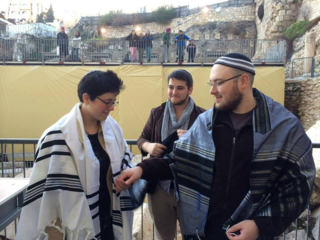 Austin and Friends at the Egalitarian Western Wall
When Rabbi Gershon Winkler sent his endorsement of To Drink from the Silver Cup, he alluded to the first question that God asked First Human, “Where are you?” The answer from those who are ready—from Abraham to Samuel to Isaiah—is, “Hineini (Hebrew),” or, in English, “Here I Am.”

“Here I Am,” was what Austin Schaffer, who is a genderqueer Jew, needed to be able to say at the Western Wall in Jerusalem four years ago. Being able to say, “Here I am,” is for most LGBTQ people a process that takes place over time. As Austin wrote in commemoration of National Coming Out Day 2017, “For me ‘the closet’ is not a thing that I can just jump out of and say, ‘Here I am!’”

Austin is a friend of my friend, Monica Friedman (See my interview with her about her spiritual journey in the December 15, 2015) archive of this blog). When Monica read Austin’s piece, she passed it on to me, thinking I’d be interested. I wasn’t just interested, I was deeply moved by Austin’s poignant search for belonging at the spiritual place where they should most belong, most be able to say, “Here I am!” Their story is their story, and it is profoundly personal. It is also universal—the story of so many of us queer folk who struggle to find our place within our religious roots. With their permission, what Austin wrote for National Coming Out Day is reprinted here:

This picture was taken nearly four years ago, in Israel. My friends and I are crying because we are standing in front of the Egalitarian section of the Western Wall—a designated section of the holy site, where people of all genders may pray and sing together and where women (and people who are perceived as women) can wear tallit, lay tefillin, and read from the Torah without risking harassment or arrest. We cried with relief, with exhilaration, with love.

Earlier in our trip we had visited the main Western Wall—the holy site divided into two sections: Men and Women, with a smaller wall between to keep the two separate. I cried there as well, because I felt like I was suffocating under the weight of this ugly aspect of my religion that I had so rarely encountered before, blessed as I was to grow up in a liberal family and a liberal congregation. At the time I think I was even angry at the trip organizers for bringing us there. Why would you bring a group of LGBT Jews to a place where we would be divided and discriminated against? Why not just bring us to the Egalitarian Wall and leave it at that? I am grateful now for the contrast, though. My experience at the Egalitarian Wall would not have been so sweet without the knowledge of what it was replacing.

The night before we visited the Western Wall, we all stood in a circle and introduced ourselves. Names and pronouns. For the first time ever, I asked to be referred to with they/them pronouns. I was curious what that would feel like. If it would feel more “right” to me. For the most part everyone just used she/her for me throughout the trip anyway. I didn't correct anyone. One day one person caught and corrected himself and I mumbled something like, “It's not a big deal.”

I didn't want to inconvenience anyone.

For me “the closet” is not a thing that I can just jump out of and say, “Here I am!” and have that be enough. For me “the closet” is the box no one even sees but they put me in all the same. It is a cloak of invisibility and no matter how many times I pull it off there will always be another one that settles around my shoulders, because people will see what they expect to see.

It is going to an LGBT wedding convention with your partner and having a dozen different organizers and vendors tell you that they're so happy to see allies participating.

It is a new friend so excitedly talking about a series of parties he's planning for queer folks and saying, “You should come too. Allies are totally welcome.”

It is coming home from Israel wearing a kippah and continuing to wear it for a few months before finally giving it up because if you have to hear, “I didn't know women wore those” one more time you're going to scream because you're not a woman, but just saying, “I'm actually not a woman” would infer that women DON'T wear kippot and also this really isn't a conversation you feel like having with a stranger in the grocery store or on the bus or across the counter at work.

It is having so much anxiety over what you're going to wear during a four-day business trip that will fit and that will look good and that you'll feel good in that you shave your armpits to give yourself more “feminine” options even though you promised yourself after your cousin's wedding that you'll never do that again, because you hated making that compromise, but here you are doing it again.

It is wanting to cringe at every “girls' night” invitation and whenever a customer says they're so happy to be working with a woman, but people are just being nice and you like to feel included and appreciated so you're not gonna say anything.

It is trying on a binder for the first time and looking in the mirror and wanting to cry because it still doesn't look right and when you leave the store you tell yourself, “It's okay, you didn't really want to bind anyway,” and later a friend suggests that maybe sometimes it feels important to be visibly trans, and that makes sense to you.

I use they/them pronouns (or no pronouns, but that gets trickier).

I love who I love.

I've been using the word "invisible" a lot to describe my own experience. Seeing it here--along with the rest of this marvelous essay--was a deep, resounding me-too moment. Thank you so much for putting this forward.

Thank you for this comment, John. I'm so glad you resonated with it. I'll make sure Austin gets it.