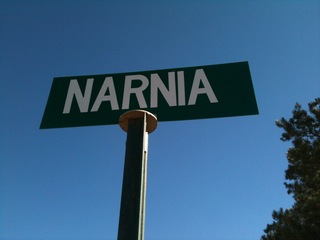 When I came back from my last tour, I wrote that I was in transition. At the time, I thought the transition would mainly involve the next step in my writing--what to write next, how to work on getting existing material published, even whether I'd continue writing or not.

But there turns out to be more. I'm preparing for Move Number 66. To Narnia. What could be better than moving to live in Narnia? It is, however, a bit embarrassing to acknowledge the number 66. In fact, as I got ready to talk things over with my brother Rick, I felt compelled to ask him to promise not to laugh.

"Well, just promise not to make fun of me." He could do that, and he didn't even laugh. As it turns out, it is Rick's Earthship #1 that I will move into on October 1.

This isn't quite as precipitous as it might sound. Anyone who followed my blog, A Year of Standing Still knows that I've never been fond of Albuquerque. But when I went on tour, I left behind a faith community I'd grown to love at St. Andrew Presbyterian Church. I came back for them, and I will miss them very much. I settled in a neighborhood I do love in one of the oldest parts of Albuquerque, and I will miss it, too.

For a year I lived without a car. Then I bought an older car that made it possible to get out of town. But I hate driving in Albuquerque, and for the most part I don't. I hate the urban-ness of being here, and those feelings contribute to a feeling of being imprisoned. More and more I have longed to live surrounded by nature and fewer people–the way I have done it for so much of my life in places like Teec Nos Pos, Gallup, Watsonville, and La Jara.

So...Narnia? Really? I won't have to step through the wardrobe in Spare Oom, though I may have to buy a wardrobe. That's because of the nature of the walls in an earthship. Some of you may not know what an earthship is, and I will leave you in suspense until the next blog post (although there is this new thing called the Internet), due next week. But Narnia is the name of the lane on which my earthship stands (or cuddles into the earth). The road was named by my nephews and niece, lovers of the Chronicles, when they were young. Technically the place is in Gamerco, NM, slightly north of Gallup. Gamerco was a planned community founded as a mining town in 1920, the name being an amalgam of Gallup American Coal Company. Narnia lies across from the platted town and across from what was once unfortunately named NM Highway 666, now NM 491. The dwellings in this area are far apart and cradled among hills and mesas covered in piñon, juniper and sage–just right for me.

The just-rightness is confirmed by how the earthship became available and by the fact that I've hardly told anyone yet that I'm moving, and already I have more offers of moving help than I've had for any single move undertaken in the past. After 65 moves, that says a lot.

Next week: A SHIP IN THE DESERT

I did a little googling, what a unique, beautiful setting. First time I have read or known about Earthships. Praying the Lord go before you and make your transition smooth.

Thank you so much for your prayers, Bea. And you've already done your homework!

Anna, I will have to do my research as I have not yet. Sounds very intriguing. I congratulate you in your decision because it could not have been an easy one. I hope this transition #66 goes well.

Just wait until next week, Cheryl, and you won't have to do research, unless I don't give you enough information in my next blog post!

Thanks, Therese. You would like this place a lot, I think. When are you coming to visit?!

When I first read the number I wondered if you were relocating to a place/town on Route 66...and I guess you
are since Gallup is along Route 66 and Gamerco is only a stone's throw away.

Though I live in Gallup I did not know that Gamerco is an amalgam of Gallup American Coal Company. It's cool that you'll be living on a Lane named by your nephews and niece.
When my two daughters were younger we named the trees on our property after writers...fun.

I have an antique wardrobe and after reading about the adventures of Lucy, Edmund, Peter, and Susan in The Lion, the Witch, and the Wardrobe I wondered what kind of adventures I might have if I entered the wardrobe...I still could enter it, I guess; however, it stands unassembled in my basement at the moment, along with an antique (100+ years old) upright Kreuger piano I had hoped to restore; since the cost was prohibitive (for me) I am now trying to find a new home for it. IT IS FREE--the potential owner(s) just need to pick it up and transport it themselves...please inform anyone who may be interested.

Enjoy "earthing" in your earthship home...when I first came out to New Mexico I looked at one and briefly considered life in one...my path took me elsewhere.

Loved your comment, Mirakhel! When I was a child, my brothers and sister and I named the branches of our apple tree--not writers' names, alas, but we sat on them for hours, trading ownership, etc. It is the piano that's free for the taking or the wardrobe?

Anna--thank you for your response.
IT IS THE PIANO that is free.

The wardrobe (a family heirloom) is currently NOT FOR SALE;
however, in the event that neither of my daughters want
it I MIGHT be open to selling it).

Anna, I wish you a smooth transition to your new home. And you’ve got me beat by 48. Looking forward to hearing more about this adventure!

Anna, I'm so excited for you! And a bit jealous!
I'm thinking of those star littered dark nights when you'll think you can touch the heavens. And those clear, cold days in winter when the light wraps the desert in honey. You are returning to live in the earth; how appropriate!

Margy, Margy, Margy! What a beautiful description of what my life will be. I hope you will visit me there.

This is rather astonishing news, Anna! And how symbolic to return to the landscape of your childhood, accomplished, wiser and, I hope, healed. On a personal level, I am happy for you; as a member of St. Andrew, I am sorrowful. However, considering your penchant for moving, I am not giving up hope that you will be back. You just might find that you are more "urbanized" that you realize!

Thank you so much, Paula, for these words. I've so enjoyed getting to know you, and I'll miss you. I don't imagine moving back here, but as you say, you never know. However, Gallup is not far away, and I'll be back for visits. I'd love a visit from you, too, once I've moved.

Wonderful! It will be so much easier to book a lunch date!

Dear Lucy, I mean Anna! I am so excited and hope you will invite me for a visit! A 66th move to Narnia - only for you dear friend! Add me to the help moving list!

I have two friends named Janet, but I think this is Janet on Campus, yes? Of course your are invited. I was planning on calling you. Anyway, I love being Lucy and would love your help with moving.

Rod and I haven't offered to help you move yet, but that's a given!
I fear I'm more than a little jealous....
Re previous blog: I'm not on FB, but will cont reading your blogs with pleasure.
Fonda

Thank you so much, Fonda, for the offer of help. I think we'll have fun. I'm not sure what you're jealous of, but you can come visit the Earthship (and me) ANY time!