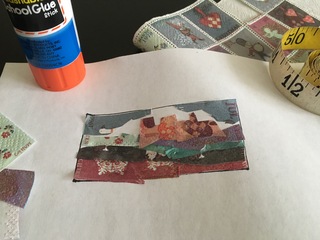 At the end of a major creative project, including the work of getting it seen by hundreds, I think (without anxiety for once) that perhaps I am at the end of my writing career. Or I feel it will, it must, now take a different direction. I am in transition. And transition is a space I love. Maybe it’s why I’ve moved so often—65 times now. I love it because everything is in free-flow. Anything is possible. I am the one to give it form. I know I will continue to create, but what? How?

I have used The Artist’s Way by Julia Cameron at least three times, and it was a wonderful guide into freeing and opening the mind. But I need something different. Oh, I will always practice Morning Pages, and I want to be better about Artist Dates, but I need something new to jiggle me loose. I remembered my friend Monica used the exercises in a book with the word hat in its title, so I PM’ed her. The Trickster’s Hat by Nick Bantock, she told me. Wonder of wonders, I could get it from the library, but a few days in, I think I may want to own it.

I did the first exercise before I left home, and Trickster is one of the few books I took along on this road-and-book trip. I am, at present, visiting Cheyenne in Elk Horn, Iowa, population 662 in 2010. I opened the book to see what materials I would need for the next exercises. Population 662 might pose a problem.

I need a fat, soft lead pencil and paper at least 12”x12”. Of course there’s no art supply store here or in any of the surrounding farm towns. Aha! There is a hardware store. I can probably get a carpenter’s pencil there. No, they’re out, as the clerk tells me, clearly with no concern for my requirement. But I find one of those soft marking pencils—where you peel away paper to expose the soft material for writing. And I cut up a paper bag to get the right size paper. It works.

The next exercise requires stamps for making a tiny collage of a landscape. There’s an indoor flea market here called the Egg Krate. It’s a marvelous place, every booth beautifully organized, lots of antiques and collectibles and skillfully displayed junk. I must be able to find a baggie with old stamps. Or a bunch of envelopes. Or collectible postcards. I went through the store, which went on and on from room to room, twice. No dice.

Elk Horn is one of two small Iowa towns, the other being Kimballton, where the citizens made a decision several years back to name themselves “Danish Villages.” Elk Horn houses a real Danish Windmill, the Museum of Danish America where Cheyenne is the archival collections manager, a Danish winery (not sure what makes it Danish, but I may find out), and lots of Danish surnames floating about. Also many Danish flags flying. After visiting the Egg Krate, I stopped in at the Danish Windmill’s gift shop, where there’s more than enough Danish kitsch, some really nice and useful Danish items, and some traditional Danish foods. Ever hopeful, I thought maybe I’d find an envelope of Danish stamps. Nope. But then, to my surprise, I found a packet of what looked like postage stamps commemorating Christmas and lined up in rows. It took me a minute to realize the packet was actually napkins with a Christmas stamp design. Another aha! Not real stamps, but I could use them. I bought the napkins, a package of rugbrød (Danish pumpernickel bread), imported Havarti cheese, and a Dansk Lurpak (a block of Danish butter).

Now the only thing missing for the project was a glue stick. I found myself wishing I’d bought the Elmer’s wood glue before the Fejen’s Hardware closed, but I knew that would be overkill. I decided to drive the ten miles to Exira to the Casey’s General Store, thinking surely they’d have glue sticks. I could gas up at the same time. They had two kinds of super glue but no glue sticks. The teenaged clerk said there was a fabric store further into town. I thought it wouldn’t hurt to try. A woman, her son and husband were in the back room having lunch, and eventually all three came out to help and let me know there was a fabric glue stick for $7.49, “But we’re not sure it’ll work on paper.” I wasn’t about to pay $7 for a glue stick that might not work.

“But there’s a Shopco in Audubon,” the woman said, waving in a general direction that was a continuation of the road I’d come in on.

“How far is it?” I asked, but uncharacteristically, I didn’t ask for specific directions.

I took off in the direction of her wave over a road in dire need of repair, going up and down the Iowa hills—don’t believe anyone who tells you Iowa is flat. After driving more than 15 miles, I arrived, not in Audubon, but Anita, which only had another Casey’s. And no glue stick there either. I headed back to Elk Horn, using I-80, this time, despite my usual policy of not driving on Interstates if I can help it.

Two mornings later I was out the door before 6:30, headed for the the HyVee in Atlantic. Yes! A glue stick and some necessary food items. This morning, I set about making my tiny collage—3” by 1.5”. I’m supposed to tear the “stamps,” but this being a napkin, which I quickly discover is made of three layers of tissue-fine paper, I break one rule and cut the pieces to make a collage of a landscape that reminds me of home—Three Monkeys in Teec Nos Pos. It’s an enormous rockpile in stripes of gold, rust, verdigris, mauve, rose, and cream. It’s a painstaking task. Nick says that stamps are the perfect weight for tearing, but the tissue thinness is definitely not. Nevertheless, I think, “Not bad.” And I also think I will probably make another when I can get some real stamps. In the meantime, project accomplished.

I'm so glad that book was useful to you. I almost feel like I should go through it again, but my head is so full of projects already. Maybe later in the summer. And I love how you spin your quest for a glue stick into epic journey narrative right after saying you're done with writing. Maybe only done with certain types of writing? When you get back to civilization, maybe you can get the matte medium Bantock keeps mentioning. I resisted it for 1/2 the book but It's really great for those types of projects.

Of course, I understand this! I don't do collage anymore except for making cards, but still gotta have glue sticks!
Sounds like so much fun.
Also, when I lived in Missouri, my friend and I went to that Danish area of Iowa. I don't remember much, but the windmill!
Blessing on your new projects!

Monica, I love the book. I don't know if writing will ever let me go, but I think I want to have more fun with it. Different, yes. I do plan to get the matte medium when I get back to the Q, but gel stick was actually the thing for this mini stamp collage. The next collage is to be black and white, but that may also prove to be a challenge in a town of 662. Improvise, adapt, overcome. Back to the Egg Krate. As for epic journey, I know a journey to be sacred when there are obstacles. Of course that can be said for all of the life journey.

Lis, it is fun. I always enjoy the challenge of meeting certain requirements--in writing as well as in visual art. I find that it stimulates my creativity in different ways to be give certain parameters. Fun to hear that you've been to Elk Horn!