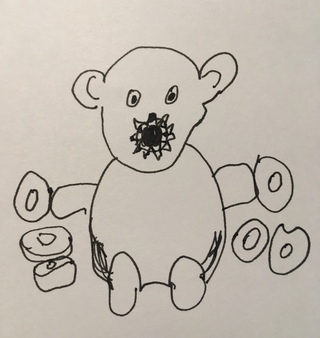 Scene: Upper story, beautiful rammed earth house, Nacimiento Mountains, Regina, NM, 3:30 am, silence of night in the dark forest. And then: the deep-throated baying of Ninja the Bassett hound. Cranky, I struggled out of bed and down the stairs, thinking the old boy must need to pee. He ignored me and my silly questions, "Do you need to go out? Do you need to pee?" and continued to bark nonstop at the huge bay windows facing the woods. I turned on a light, which of course meant I could see nothing outside. I turned it back off and peered into the moonlit clearing and the trees beyond. Everything appeared to be as it should, but Ninja would not, indeed could not, stop barking. I trudged back upstairs, and around 4:15 I went back to sleep; he was still barking, and I have no idea when he stopped.

At 6 am, I got up, fixed Ninja's food bowl and also calico Portia's. After the 20 seconds it took the hound to inhale his food, he headed outdoors, barking all over again for the next two hours. There was obviously a disturbance in the Universe, but what, I didn't know. I proceeded to water Farmer Pete's many plants and trees, came back in and settled to work, only to have the landline (what's that?) ring. A mountain neighbor started leaving a message. I heard, "Bear invasion last night. Wondered if you..." I tried to intercept the message. I guess I don't know how to use a landline anymore. Fortunately the neighbor mentioned his name, and I found the number in the Cuba phone directory and called back.

A bear had attacked their garbage, strewing leavings in a 100-foot pathway toward the house where I was staying. The bear had torn down six hummingbird feeders, left three huge piles of droppings, and paw prints, also headed my way. The neighbor had called Fish and Wildlife Service, who would arrive with a trap later this morning. Perhaps you can guess from my crude drawing (the teeth are an attempt to represent fierceness) what F & W uses for bait.

I have been loving my forest walks, making sure to get in my 10,000 steps, but suddenly the idea of walking hereabouts was less appealing than before. As if to reinforce my reluctance, Ninja went out again to bay around the circumference of the house. I was glad I'd taken care of Farmer Pete's watering before I knew that the disturbance in the Universe was caused by a bear. I decided I would get my exercise sweeping the floors and doing some dynamic yoga. It was Pete who thought I should blog about this. "It only happens about every five years," she said. "You can always take a gun on your walks." Right. I'd probably hit the bear's tail and be killed forthwith.

In completely other news, my essay "Some Things Were True" is a finalist in Tiferet Journal's nonfiction contest. Better news, although it's a tossup which is more exciting–the bear or a possible contest win.

WOw! Congratulations on the Tiferet Journal - very exciting!
And I feel bad for the bear!

Thanks, Diane! I should've said, it's catch and release, just to get it away from human habitation. It's been an incredibly dry winter, but with the recent rainfall, it should be getting better. I know what you mean, though. Honestly, I was more afraid in the middle of the night that it might be a human being that had alerted Ninja.

Just sing a happy tune while you are walking in the woods to let the bear know you are thre and don't bring the box of breakfast donuts with you. LOL

Instead, the house is getting a nice cleaning!

Congratulations on your acceptance to the writing contest.
Hope you do not get any more exciting visits! Wow.

Nothing like a little excitement to shake things up :P

I probably would have been eaten by a bear.

Quite a story re the bear! Do you think the barking discouraged the bear from continuing in your direction? I assume the damage:feeders, etc. were at your neighbor's?
Congratulations re your writing's being accepted, but I'm not surprised!
Like to know more about that re content.

Vel, I'm sure Ninja the Bassett Hound believed his barking discouraged the bear from doing anything at our place, but the bear did get the lid off a composting bin (quite a feat), so I think less damage was done because the humans here had their trash in barrels kept behind closed doors in a shed.

Thanks for your question about "Some Things Were True." It's about Navajo and white beliefs and practices regarding death and care of bodies--how different and similar they might be and whether what my father the missionary learned from other white men was true or not. In a nutshell. If it wins, it will be published, and I'll be sure you have a chance to read it if you're interested.