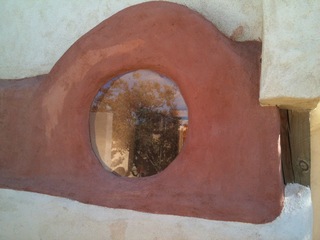 Gray waves sough gently, rocking to and fro. Then a form breaks the surface–a dolphin's graceful arc. Or it's the comical bounce of a jack rabbit's ears. The sea and the high desert–so like one another and yet so unlike. At first glance there is only the surface, no sign of life other than water or the rocking fronds of sagebrush. But beneath the surface these two vast bodies teem with life–in the ocean, fish of every kind and color imaginable and unimaginable, ocean mammals, crustaceans; in the desert, reptiles in their hideaways, burrowing insects and small mammals, coyotes, cottontails, horned toads, and blue-tailed racers sheltering beneath the saltbushes.

And so an Earthship, originating in the high desert of Taos, New Mexico, takes its name from its water-riding sister. Like the sister, it is designed to provide self-contained shelter from the elements. In the 1970s, architect Michael Reynolds envisioned a dwelling that offered:

The solar heating came from passive-solar, south-facing windows and the storage of heat within earth mass. Cooling was through simple roof ventilation. Solar electricity from photovoltaic panels was stored in an array of 12-volt batteries. Sewage treatment utilized composting toilets and gray water recycling in planters placed along the passive solar windows. The planters supplied the opportunity for internal food production. Natural, local materials came from the earth, trees, and stones. Recycled materials could be just about anything, but the main sources were used tires rammed with earth until they weighed about 300 pounds each, and crushed aluminum cans provided infill between tires. These created lovely rounded U-shaped walls, lined up as rooms facing the southern exposure windows. Bottles might be reused to provide multi-colored windows. Water would be harvested from the sky to the roof of the structure.

People applied their own creativity to this basic plan, and my brother Rick was among them. Over time in the 90s and early 2000s he built a total of three Earthships among hills and mesas covered in piñon, juniper, sage, yucca, and rabbit brush. Each consecutive Earthship he built incorporated more of the features dreamed up by Reynolds.

Earthship #1, Rick's first building, and where I will commence living in October, is composed of two U-shaped rooms under an earthen berm with native plants growing on its roof and sides. The room at the entrance is the largest–an open space used as a living, eating and cooking area. It is bordered by a wide hallway and two large planters. For cold, gray days, there is a pellet stove. The room shows off three types of flooring–packed and sealed earth, local flagstone, and tile from Restore, Habitat for Humanity's retail store stocked with reclaimed, reused, and recycled building materials. The smaller U is a bedroom, and there is a bathroom with a conventional toilet (following several unsuccessful tries with various versions of composting toilets).

I stayed in this Earthship in 2012 and found its isolation conducive to writing, meditating and solitary hiking. I took some additional photos back then, sort of as an afterthought. Because of the time of day, the lighting is less than desirable, but you can see a few other views by clicking on the link beneath the photo on this page. I'll have some better ones for you, once I've moved in.

Wow, this is really lovely, Anna!

I thought you'd appreciated it, Therese. Now to get you to come for a visit!

can't wait to see and experience it, Anna!

Hello Anna...thank you for the pictures and the post...
I believe it will be truly wonderful for you to be
living in Earthship #1 in October...enjoy now ...and then.
Mirakhel