MAKING AN AUDIOBOOK: INTENTION AND OBSTACLES MAKE THE JOURNEY SACRED 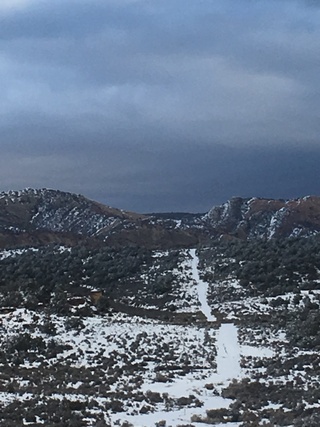 The dates for recording were set. And the snow fell. And fell. I anxiously watched the weather app, and the predictions changed from hour to hour, but more snow was ever present. The question was when, how much, and where. I drive a small, low-slung red number. It looks like a sports car but is loaded at the moment with 80 pounds of wood pellets for my pellet stove and 4 cubic feet of soil for one of the big planters in the Earthship. It can carry a whole lot more, but it isn't good in snow.

I started to research AWD or 4WD vehicles. I can't spend the money on one right now, but there is a foot of snow outside my door, and the car has about an 8" clearance. One friend suggested I might receive a car miracle. I have another friend who's had two cars--good cars--given to her over the past few years. I couldn't imagine having that happen to me. Did I mention that my audio producer was in Santa Fe, which generally gets as much or more snow than Gamerco?

When one obstacle after another presents itself on the path to a mission, testing one's resolve to complete the task, I consider the journey to be a sacred one. No obstacles–ordinary trip. The more obstacles, the more auspicious the journey.

A magical 4WD did not fall into my lap. But I suddenly remembered that some good friends were driving back to Albuquerque from Winslow in their–yes–AWD Outback. It was two days earlier than I needed to be in Albuquerque as the first stepping stone to Santa Fe, but another friend was happy to put me up for a couple of nights. And the Outback friends were happy to take me along. Maybe I need to add an ounce of magic to the equation:

My friends showed up. There was definitely more snow at that point than my little car could handle, but we were graced with blue, blue skies and sunshine. It started to snow a bit around the Continental Divide, but that's to be expected. Then about 35 miles west of Albuquerque, the snow fell in earnest, and the highway turned icy. More than ten accidents and as many stranded vehicles filled the median. Tow trucks were plying the shoulders. One semi lay on its side, its contents, which looked like bales of yellow insulation material, spilling out the rear doors. Another 18-wheeler was jackknifed in a ravine. We proceeded at 30 mph, and I was so grateful not to be driving. We made it safely to Albuquerque, where I enjoyed relaxed time with friends.

Two days later, my resolve having been tested and proved worthy, I boarded the Railrunner to Santa Fe and enjoyed every minute of the route that passes through secluded hills, the small town of Algodones, and San Felipe and Kewa Pueblos.

NEXT INSTALLMENT: RECORDING DAY ONE

Another beautiful blog! I love reading them! Especially liked the title! Intention and Obstacles makes life’s journey sacred...and this as one beautiful illustration of that! Thanks, Anna!!!

Thank you, Dorothy for your meaningful comment. Yes, in all of life's journey, and this is only one example. It encourages me when I'm facing one obstacle after another to suddenly realize, Oh, this is a sacred journey!