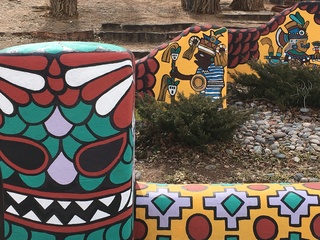 Along the Santa Fe River Trail

In the beginning, I naively thought my part in making an audiobook was over when I finished recording. Not at all. The next step was my producer's, for sure, and he spent twenty-seven hours–exactly twice my recording hours–editing and mixing. Then he sent me forty-one audio files. I had to listen to myself read the entire book and find things that Chris had missed in the editing process and places where I had made mistakes that couldn't be corrected in editing.

I would have thought that reading was the toughest task, and in one way it was. It may have been the most intense concentration I've ever had to apply to a task, except maybe during the days when I scrubbed in as an OR tech. There were also the little things I didn't think of at the outset–how dry, not only my throat, but also my lips got, how uncomfortable the chair was. And, not so little–how impactful it was to read passages about painful events in my life. Listening to those passages meant re-experiencing them yet again. Reading "Part II: Exile" was the most draining in the recording studio, but listening to "Part III: The Experiment" made me so homesick for my people at St. Andrew.

The hardest part of listening, though, was finding errors, locating the exact time stamp for them and, hardest of all, anticipating telling Chris where he'd missed things. That was anxiety provoking. A friend who knew musicians who've recorded told me that was the process–lots of back and forth between the producer and the artist, and that was helpful, but it's so much easier to admit my own mistakes than to tell someone else they've make them. This was one more task that required intense concentration and accuracy.

Listening, taking notes, and marking all the places that required attention took several days. Then I had to write up my notes in a way that would be comprehensible to Chris. Several phone calls about what could and couldn't be done to correct the errors, as well as what might be possibile and what we might have to fix in another recording session, followed. We had already scheduled an additional session because I still needed to record the five-minute sample that will appear on sites like Audible–a tool future customers can use to decide if they want to buy the audiobook.

Last week Thursday I rode to Albuquerque in gentle, beautiful rain with friends who were Santa Fe-bound. The next morning I took the Railrunner to Santa Fe. Chris and I had decided that Chapter Seven had to be recorded in its entirety because of frequent irremediable rustling sounds throughout. And I had to record my five-minute sample, which I'd worked long and hard to compile and trim to what turned out to be four minutes and 54 seconds. There were three other places where I needed to re-record paragraphs containing errors that couldn't be fixed by editing.

When we were done, I took a Lyft to the Santa Fe La Montanita Co-op to buy some organic cotton socks and eat a lunch of drumsticks and veggies. After lunch, I walked along the deep ravine in which the Santa Fe River flows through town. I feasted on the sights of old adobes, small courtyards, city parks, and trees in their winter dress, ending up at the railyard, where I would catch the Railrunner back to Albuquerque.

The job still wasn't done. Chris edited again and sent me back the stuff we'd worked on, and once again I donned my earbuds.. I identified a couple of problems, Chris fixed them, and at last it was a wrap. On my end. But then Chris called about a problem with the cover image. We thought we might have to contact the publisher for the original image, but I didn't hear back, so now it is in the hands (or ears) of the distributor, ACX. They have to approve the quality of the recording before it's finalized and sent to Audible, iTunes, and Amazon, which can take up to a month.

I'm not finished yet, because now I need to start letting people (including you) know that you'll soon be able to purchase To Drink from the Silver Cup as an audiobook! This morning finds me in the Albuquerque Greyhound Depot, waiting for the bus to Gallup, which had so much snow this week, that it wasn't practical to head back on Monday.