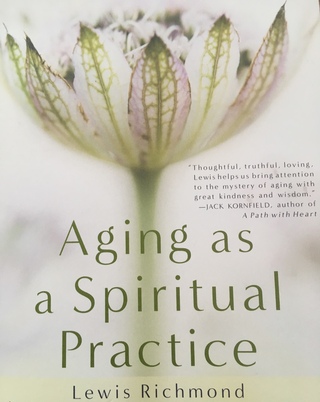 I didn't want to admit that turning seventy was hard. I talked about how I just couldn't grasp it, but I kept saying it wasn't hard to be getting older. Until I knew that it was. Then I bought three books on aging well. I started with the one by Sister Joan Chittister, and that one didn't move me or give me anything to chew on. Then I took up Aging as a Spiritual Practice: A Contemplative Guide to Growing Older and Wiser by Buddhist priest Lewis Richmond. And this is where I am. Every morning I read until I find something that speaks to me. Then I underline it and journal about what I've noted. Or I journal on the questions at the end of each chapter.

The chapter I've been working on over the last few days is titled "Stages of Aging," which isn't, as it might sound, about what happens to you in each decade as you grow old. Instead it explores how we come to terms, adapt, and appreciate our aging. Responding to this chapter's "Contemplative Reflections," which ask us to look at the emotions involved in reckoning with aging, here's what I wrote yesterday morning:

Initially, as I began my sixty-ninth year, I felt baffled. It was because on my next birthday, I would turn seventy (obviously). I simply could not grasp that this was happening. To me. Such mystification had only happened to me once before–when I was about to turn five. I recall lazily swinging from the oak tree above our house while my mother hung clothes down below. I shouted to her, "I can hardly believe I'm about to be five!" My mother, with typical Dutch bluntness, shouted back something to the effect of, "It's no big deal," and went on hanging diapers.

But seventy sounded so much older than sixty-nine. Dealing with it was akin to trying to grasp that one day I will die. One day I will no longer be here in the only place I remember having been–on the Earth. When I reached seventy-one this year, I felt that over the previous two years I had embodied the age I now am. It is what is, I tell myself, and I feel I've accepted it and am ready to explore it now–to find out what it's like to be this old. What might it mean as I progress through more years, if I'm given them?

In part it has meant that I felt another emotion–regret. Richmond says there's often some other emotion underlying regret, and he names fear, anger, or anxiety as possibilities. For me it's sorrow. Sorrow because I have not been successful in creating intimate relationship. Capital R Relationship. I've had two long-term relationships that lasted seven years each, and I would not describe them as successful, though I learned a lot through both. I've been single now for more than thirty years.

Shortly after I turned sixty-nine-I fell in love with a much younger woman. We became good friends, but my feelings of being in love and hoping for something more were not returned. I couldn't help feeling if I'd been younger it might have been different. The unreturned love, sorrow, and regret about things I have no control over–another person's heart and my age–became part of the stage Richmond calls "Coming to Terms" with aging. For months, I wanted to go back to being younger.

Now I'm consciously choosing to enter a new emotional stage–one of gratitude. And I am grateful–grateful to have reached the age of seventy-one, to be in excellent health, to be physically remarkably fit. I am grateful for the gift of life, for the beauty I'm privileged to witness every day, for the love of friends and family, and for continued meaningful work. I'm grateful that I am beginning to engage in the spiritual practice of aging.

Hi Anna… I can relate to this post having just completed 74 years of Living in Form. Still enjoying Life as it is but looking forward to shedding this body and experiencing flight again. There is so much more I want to know about the Energy we call Life but will have to wait until I finish this Kindergarten course before I can move on to the First Grade.

Thanks, Wayne. I love how you expressed this! Yes, the next step will certainly be an adventure.

I am grateful for you being in my life for so many years!

Thank you, Pita! I am grateful to you for the same. We're aging together!

I loved reading this, Anna. I try not to think much about aging but appreciate your courage and plain talking about it. You are an inspiration!

Thanks so much, Linden. I'm glad this post offered some food for thought and perhaps feelings. It was also a big step for me to acknowledge having fallen unhappily in love. Not unhappily in every way, I must add.

It is good to reflect. My parents are 91 and when I pray for them I ask that they may get older with grace and dignity. Well my mother has dementia and my father finds it difficult to walk, let alone care for her. I am the eldest at 67 and my husband is 70. So a lot of caring falls on us. We also still help with our youngest grand-daughter, driving her to and from school and whatever. Life is full and the body is getting more arthritic. Gratitude is the best medicine, thankful that we can do what we need to, thankful for parents and children, thankful for each new day, thankful for the earth that sustains us and to the Creator who makes everyday a new adventure. Thank you for people like you Anna, whose creative writing can enrich our imagination so that I can feel like a child at play discovering new treasures to hold even as I grow older. It has been said that in years gone by "people lived with death" as many did not grow old. And today "people are dying to live." I have often pondered on that often. Thank you, Anna, you are dearly loved and appreciated as you let us inside your heart.

Connie, thank you so much for sharing about your life as it is now and about your parents' lives, as all of us age. Thanks for the quote, too. I shall have to ponder it as well. Maybe you'll see it in another blog post from me! Thank you for such kind words about the writing I share. It is always my hope to touch hearts with my writing and to make a difference in the lives of anyone who chooses to read it.

Dear Anna,
First of all, if I had bothered to do the math after reading your book, I guess I should have known your age. But it shocked me because I see you as so vigorous, so YOUNG at heart, so full of life. Which makes me wonder why in heaven I stereotype the age of 70+ as being fragile, decrepit, lifeless.
I wrestled with similar feelings when I turned 60. I think I will put the book you mentioned on my reading list.
Thank you for opening your soul to us yet again. You certainly touched me with this.

Thanks so much for this, Beth. I know what you mean about stereotyping age. I didn't notice until very recently how people in their 60s and 70s are portrayed exactly as you describe in so many books--decrepit and frail, referred to as elderly. Now, if I mention being old, younger people invariably say, "You're not old," and I respond, "But I am." Chronologically, I am, but I don't feel old, which is part of what has made it more difficult to accept that I am indeed aging. Of course, technically, we all are. I'm glad the piece spoke to you.

Dear Anna, you never fail to surprise -and inspire -me. I deeply respect your willingness to let go of material stuff and homes, your ability to live simply and to get moving when you feel the longing for new horizons. I wish you a great tour, enjoy! XX, Tina

Thank you, Tina, for being such an affirming friend. Thank you for joining me, all these many years, on my journey, as I do you on yours. What a privilege we've been given!