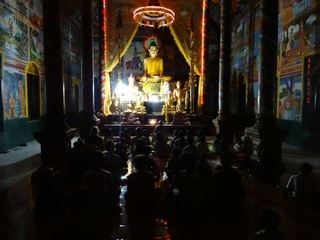 Wayne and I met in the early seventies at Rehoboth Mission, just outside Gallup. We had a shared history, having both grown up in the Christian Reformed Church. He and my former partner had started a youth center in Gallup, a town that was tremendously lacking in healthy activities for young people at the time. We lost touch when I moved away from Gallup.

Wayne continued to work as his own style of Christian missionary in the Gallup area for a total of twelve years, then as a missionary in Honduras for another twelve. He was drawn back to Southeast Asia after that because he felt an obligation to help heal the wounds left by the Viet Nam War, in which he had served as a medic. He ended up co-founding a children's community, Wat Opot, in the Cambodian countryside, for children whose parents had died of AIDS. In the early days Wat Opot served as an AIDS hospice. Today a percentage of the residents are HIV positive and are thriving on their daily doses of anti-retrovirus drugs.

Thanks to social media, Wayne and I reconnected a few years back, and in 2008, my daughter Cheyenne and I visited him and the children at Wat Opot, also making a journey together to the world famous Angkor Wat. We spent ten days in the children's community. The children were possibly the most vibrant, lively, engaging youngsters I've met. They quickly slipped their way into our hearts, as they have with volunteers from all over the world.

Wayne writes his own thought-provoking blog in which he has shared much of his spiritual journey. I found this entry about an early step he took away especially moving and asked if I could share it as a guest post.

I remember that first time when I bowed to the Buddha, as the children were doing their chants. Such a simple act… and yet perhaps one of the most defiant and difficult things I have ever done in my life. I have certainly not lived the life of a saint and, in fact, have been a rebel from as far back as I can remember. Fired from every job I have ever held, court marshaled in the military, kicked off the mission field not once but twice, and branded a heretic by those who once called me a brother. Rebellion yes… but those acts of defiance were done against men and I had no problem justifying them. To bow to the Buddha however was, for me, an act of defiance against the God I had known and worshiped all my life… an unpardonable sin that I would have to live with for the rest of Eternity, but I was desperate… desperate to know a Truth that needed no apologies and required no Faith.

My body resisted, as I began to go forward as if preparing itself for a bolt of lightning to come through the ceiling of the temple and strike it dead… but nothing happened. I bowed a second and third time, and as I came back to a sitting position, I was overcome by a peacefulness I had never known before. The chains of religion, that had held me in bondage for so long fell away, and its threats of hell and damnation no longer intimidated me. I was free and I felt alive… alive and One with all that was around me.

Today, I am considered by many to be an atheist, because I no longer believe in a Creator God. That, however, does not mean that I do not believe in anything at all… for I still believe in Life and all that I can see, hear, or touch… and I believe that there is much I do not yet understand about Life, and perhaps never will… but my mind is now free to wander and to wonder and to be continuously amazed at how the complexities of Life can so easily be simplified by a single act of Compassion.

Wow - powerful. Thanks. To be free from the prison of dogma and "the right way", and free to wonder!! The Divine of many names must be delighted!

What a wonderful, joyous response, Kathy! I will share it with Wayne! Thanks.

Such a powerful story, Anna, both what you wrote about the journey of this man, and his story. His is a truly important story that needs to be heard, and I know those "chains" really did and do torture many Navajo for many years who were subjected to those zealot teachings.

Thank you, Diane, for your deep and broad understanding of Wayne's piece. I'll make sure he sees your comment.

Wayne’s post is very interesting to me and good for me to try to understand another’s release from the unfortunate chains of a religion that seemed fearful and stifling. I’ve read Wayne’s blog and am captivated by his valuable work in Cambodia.

Cor, I so appreciate your openness to learning from Wayne's experience. His work in Cambodia is truly wonderful. If you ever have the chance... I'll make sure Wayne gets to know about your comment.

Thanks for reposting this Anna and Thanks also to your readers who commented. It is not often I get positive feedback from my writings but am greatly encouraged when I do. Would that more people could be open to alternative views and opinions instead of threatening hell to anyone who disagrees with them.

Anna, I read your post sharing Wayne's journey. I am not sure what I think. I have always for the part except for maybe 4 to 10 years where I questioned. But I always came back to God and I don't know that much about Buddha. I can say I have never put anyone down for their different beliefs in the different religions.

You're so welcome, Wayne. Thanks for giving me permission. Clearly several people benefiitted from your words.

Cheryl, thank you for your comment. It's wonderful that you can say that you've never put anyone down for having beliefs that are different from yours. I think that is in contrast to some of the kinds of replies Wayne refers to regarding people who respond to his blog. I've read some of those, and sometimes they're mean. So thank you for being so open hearted. That is how I experience you.