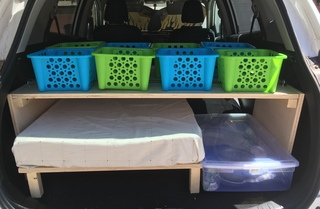 Cheyenne embroidered me an inspirational sign that says, "Doe the Next Thynge;" nevertheless, anxiety overtakes me at times, and it leads to procrastination. Next week I'm heading out on an eight-night trip in the RAV4, and I wanted very much to have my sleeping platform and over-the-foot shelf built and installed by then. My anxiety verbalized like this: What if I measured wrong? What if the person who's going to cut my plywood at Lowe's measures wrong? What if the traffic on the way to Lowe's is too much? What if the store is filled with people? What if... what if...?

Finally, on Sunday morning, when I knew traffic would be light en route and in the store, I went with my carefully laid out drawings and stepped up to the contractors' desk, where the clerk called a young man named Josiah to help me. As we walked back to the saw, he told me that he'd been off the last three days, and as always, he returned to find the lumber shelves in disarray. My confidence in him shot up because I think someone who likes order in their workplace was likely to be painstaking about my job. And then he used the word "deemed." Having a good vocabulary and being unintimidated to use it in the lumber department of Lowe's didn't mean he would be skillful at ripping plywood. It did, however, say something about his intelligence, which gave my confidence another boost. He also knew it was important to have good relationships with his coworkers (stated as we chatted about chatting while working).

Josiah helped me select a sheet of maple plywood that had been sanded on both sides and would require less hand sanding, so I'd only have to work the edges. I also had him cut some 2x2s. While he measured and remeasured and thought and cut, I went around the store picking up other things I needed: a new drill bit, sandpaper, screw eyes, a bucket that would fit my new toilet seat, Reflectix for making insulated privacy covers for my windows.

Yesterday was building day, and I commandeered Catherine's covered patio as my workshop, her wrought iron table covered with my canvas tarp as sawhorses. I started early in the morning to beat the heat, but with snack and lunch breaks, I didn't finish until 1:30, by which time the temp had reached 89º.

My first step was to make the sleeping platform, which now allows me to sleep on the level (so to speak). A wonderful feature is there is underneath space for storing my small aluminum table, my privacy tent, and hopefully a fold-up chair (the one I bought a few weeks ago ends up not giving me enough low back support after driving hours.

After the sleeping platform came the over-the-foot shelf for additional storage. I had to recharge my drill at one point, but otherwise, all went smoothly. I must confess, however, that it is not the beautiful product my friend Cara or my brother Bob would produce. It is functional. And the wood is pretty. For $8, I got 8 baskets at Dollar Tree, and they are fastened to the shelf with bungie cords attached to screw eyes on each end of the shelf. These baskets will be for nonperishable foods and useful odds and ends. Under the shelf, next to the bed is my camp kitchen. Another boot box or maybe two (haven't measured yet) will stack on top of it as my clothes drawer(s). Boot boxes are good because they're shallow, so they don't require a lot of digging.

I love hearing about your process! I await the next installment with anticipation!

Thanks, Shelley! You're the best fan ever!

I got to see this amazing "re-do" of the Rav4 yesterday while it was still in progress. So clever and thoughtfully done. Happy trails, Anna!

I've read this 3 times. You say over the foot shelf, does that mean you don't remove it to sleep? Does it slide forward?

Thanks for your question, Bonita. Yes, the over-the-foot shelf stays in place while I sleep. There's plenty of room for turning from side to side. It's pretty snug, so no, no sliding but no need for it to slide from my point of view.

Thank you, Gail, for all your encouragement, all the time!

You and Greta Thunberg, sailing across the ocean under solar power! Interesting parallels! I bless you for your courage and ingenuity!

Oh, Kathy! I hardly think I merit comparison with Greta Thunberg--such a courageous young woman! Thank you for your blessing. I cherish it.

Happy trails to you and the RAV. Sounds like you thought it all out. Is this going to be your forever home?

You gave my current housemate and me a good belly laugh with that question, Diane! It's still a work in progress, too, but it's getting there.