WHAT I LEARNED ON THE ROAD 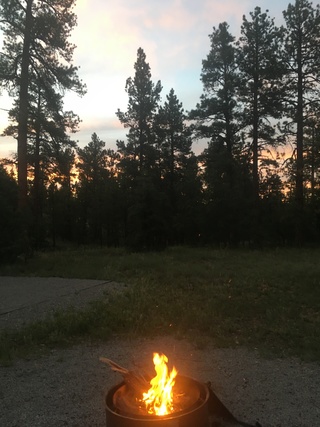 1. Less stuff. I know I did much better than John Steinbeck when he loaded his camper in Travels with Charley, but I can do with even less than I thought.

2. More organization. On this trip the storage area next to my bed became a pile of cloth bags filled with various and sundry items. Bins will make the bag I need easier to find and the whole space feel more orderly.

3. Denatured alcohol. My little Solo Stove uses twigs or denatured alcohol as fuel. Twigs don't stay lit as easily as I'd hoped and need to be added fairly constantly during boiling/cooking. They also coat the stove and pans in soot. So alcohol most times.

5. Chairs are important. The chair I bought at REI did not provide enough support for my back, and I ordered a better one but didn't have it for this trip. Picnic benches aren't enough for getting work done or just relaxing.

6. A fixed place to wander from. When I was in my early twenties, I immersed myself in Thomas Wolfe's novels–Look Homeward Angel; You Can't Go Home Again; Of Time and the River; A Stone, a Leaf, a Door; The Web and the Rock. The voluptuous language flooded my senses, and his dark romanticism was utterly relatable to a twenty-something. But it was his perception of movement, fixedness and wandering that drew me in so I still remember the words 50 years later. I didn't realize yet how restless I was; I didn't truly observe that in myself until I counted house moves on my 60th one. I didn't begin to comprehend it until I read Third Culture Kids. In one place Wolfe wrote, "...we are fixed and certain only when we are in movement." Even more compelling to my young self then, and to my much older self now, was the idea (and I could not locate the exact quote) that the true wanderer can only wander from a fixed place. I didn't know what a wanderer I would become, and if I've had a fixed point from which to wander, it has undoubtedly been an inner point until now.

I've mentioned that I've felt something akin to shame about my mobile life, and that shame has come from external sources–people jesting about my changeablilty, although some admire the adventures. But on the return road from this trip, I began to feel an actual need to settle, and it came from within–wanting, even longing, to have that Wolfian fixed place from which to wander. Wanting to be on the road one week of the month and home the rest of it, rather than the other way around. For the most part.

Although, as many of you know, I've never liked Albuquerque, there are parts of it that I love. I've spent more adult years here than anywhere else, so I have friends here and a beloved community. I have to ask, please don't judge me, maybe don't even make a joke about it, as this is a tender spot for me: I am looking for a small home to rent here. Adventures are still in the works but most likely I will not be living on the road.

Wow. Insights practical and momentous. And the “fixed place” seems deeply spiritual as well as located. Thanks for allowing us into your journeys just a bit!

Thanks, Shelley, for hitting just the right tone and saying what I needed to hear.

Oh Anna, there is absolutely no shame in having a nest from which to fly! I think aging impacts the amount of time we wander. I love discovering what's around that next bend, but there's comfort in a rooted place as well, and I love returning to my nest.

Anna...I am grateful for your welcome words. As I looked at the number of documents needed to complete a loan application on which I am working and became overwhelmed I switched gears and clicked on your email, which has helped
me to mentally reflect and to calm down.
I like the idea of a "fixed place from which to wander." Once settled in a different "home" I plan to travel/wander a bit -- in New Mexico, at least. Your perspectives always bring new insights.
Thank you, Mirakhel

Life is a journey. To discover a new thing about yourself and then listen to it takes courage. I am so glad you can and to do that for yourself. Blessings

Margy, thank you, as always for your love and compassion. I must not have been completely clear: I don't feel shame about needing rootedness. Rather, I've felt shame because of others' opinions about me being too changeable and too mobile (I'm beginning to see that as paying attention to my inner promptings and being flexible, which incidentally is listed as the most important factor in healthful aging). I have felt those criticisms deeply at times, felt that especially at my age I should already be rooted.

Mirakhel, I know what that house-selling and -buying is like--all the papers and perhaps the wondering if you're doing the right thing. So I'm glad this piece brought you a measure of calm in the midst of it all. Thank you for saying that my writing often brings you perspective.

Thank you for your wisdom, Bea.

Hope you find your place soon... was that picture taken in Mc Gaffy?

Thanks for your good wishes, Wayne. I am looking at November, as I'll be house sitting next month and traveling in October. The photo was taken at Quaking Aspen. So close.

Well, Anna, I hope you consider me a part of your "loving community" here in Albuquerque. I also hope you know how very happy we'll be to have you with us when you're not "wandering".

Thanks, Gail! Yes, of course, my "beloved community" is St. Andrew.

Thanks for that affirmation, Cheryl.