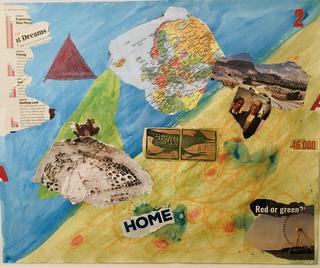 In my previous entry I wrote about "Going Home by Another Way," which made me think all over again about just where home is. The great 13th century Sufi poet Rumi wrote, "It is right to love your home place, but first ask, 'Where is that, really?'" I have moved sixty-seven times in my life. 67. That number does not include college summers, when I had to move out of the dorm or whatever temporary lodging I had. I have lived on three continents, in four countries, in eighteen cities or towns and far out in the country. In October 2019 I moved for that sixty-seventh time, this time into a 415-square-foot apartment, having downsized drastically when I left the tiny hamlet of Gamerco, New Mexico last spring.

In a time that seems long ago, I used to quickly fall into feeling at home, wherever I was, and I was good at creating home. I realized this more than thirty-five years ago when I spent a few days living on the beach on the island of Crete (this was not one of the 67 times of living somewhere and moving!). My then partner and I did not have a tent; we used our Helly Hansen rain ponchos as shelter, so home was not even the flimsiest of structures. We had our 15-speed touring bikes and panniers, and that was pretty much it. I went around gathering large round rocks to create what amounted to virtual walls around our home place. Within the walls I placed and replaced sleeping bags and panniers until our spot on the beach felt homey and orderly. And then I thought, I do this wherever I am—create home. And I do it well.

However, the last few times I've moved, I haven't felt at home—not even months after moving. Not even when all my art has been hung and every functional and beautiful thing has found its place. Including now–I'm just not feeling it. I loved the 1930s duplex in the downtown part of Albuquerque where I lived four moves and two years ago; nevertheless, when I would step into the van I'd lived in on tour, that was the space that felt like home. When I lived in the Earthship, the land around it brought me into direct contact with the Holy One, and the ship was esthetically pleasing. But it never became home.

This little apartment is the perfect size for me. Its measurements qualify it as a Tiny House, which delights me. Before I moved in, the management put in all new flooring, new carpet, repainted everything, and put brand new shelves in the oven. It was the cleanest place I'd ever moved into, and I love clean. The fact that they did all that made me think perhaps the apartment had been lived in for a very long time and was in dire need of refurbishment. When I couldn't seem to settle in psychically, I wondered if the space still "belonged" to the previous tenant. I did a home blessing and smudging. It still doesn't feel like home.

I've been quite willing to embrace Third Culture Kid-ness as the cause of my restlessness. But there are other factors. I can see that my heart was often someplace else—in another place—as in the longing I sometimes feel for the home I sold after having listed it three different times. Clearly I wanted to leave it, and now I miss it–in some moments acutely. Sometimes my heart has been with another person, which has knocked me far off-center. If home is where the heart is, as has been often said, then home is within us. It doesn't depend on external places or people. I know when I'm present, when my heart is with me and not somewhere else, then I am at home wherever I am. If my heart is some other place or with some other person in my imagination, it's hard to feel at home anywhere. I know the practice of being present has the potential to change all this; it's a process.

However we find our home within, however we settle into it, as the late teacher Ram Dass said, "We are all walking each other home." Or as Art Garfunkel wrote in the song "Woyaya," "We will get there, heaven knows how we will get there,/We know we will." And that is a comfort.

As always, thought provoking and grounded. Thank you for your post.

Thank you, Janet. Means a lot!

My maiden name is Nakai. Sometimes I let it identify my constant living out of a suitcase! I love to walk around in Utah where ancestors whisper. Imagine. Then I would like to visit my husband Tim’s Viking homelands. We are different but tolerant of one another. Home. Shighan. Shikéyah. Wherever I feel comfortable, safe, and can roam freely.

Thank you for that, Eirene, and for sharing a bit of home with me--in more ways than one. Ahehee' laa.

Love your writing. Keep us tune in on your next adventure

Thank you, Sharon. My next adventure may be here at home!