LOVE IN THE TIME OF CORONA XII 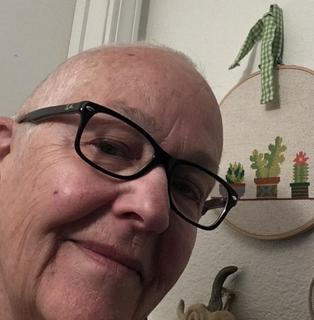 In a set of six daily quarantine questions, Number Three is, "What expectations of 'normal' am I letting go of today?" On Tuesday I let go of the expectation that my hairdresser would be cutting my hair anytime soon. My downstairs neighbor and I talked, over suitable distance, about how we short-hair women are normally on a 4-to-5-week schedule. I'm vainly fond of a nice clean look. Nine weeks after my last clip, the cowlicks were creating unsightly bumps and humps.

I've owned at least one pair of clippers with guards, maybe two—discarded on different moves as being too much to pack and carry. But I still have my German-made, salon- quality scissors, and Tuesday morning, I got them out, placed a hunk of wrapping paper over the sink and got to work. I imagined a sort of chunked up, possibly feathery look. Reality: I gave myself a buzz cut that could almost pass for a shave.

This wasn't my first pair of good barbering scissors. Long ago, I used to cut hair for friendship. Thus I had my shears with me when we moved to New Zealand. I don't remember how my midwife got a hold of them, but she used them to force open the clamp on Cheyenne's umbilical cord, bending them in the process. Unusable. We moved soon after that to Women's Land near the northernmost tip of the North Island, and one of the women there also liked to cut hair. She was from Germany, and she had her sister send me new shears. That was 34 years ago, and they are the ones I have now.

At the Scandinavian Yoga and Meditation School in Sweden, when it is time to enter the silence that lasts more than a month, to learn Kriya Yoga meditation, many students get their heads shaved. The first time I ever had my head shaved was on the three-month course. One of the yoga teachers stood by a sink in the large communal bathroom with scissors and a clipper and took us, one by one. I was surprised to see how much hair, even very short hair, detracts from the face. Without hair everything is visible. Without hair, it is also cold. You feel the breeze of someone walking past you. You must wear a cap outdoors, especially in the winter in southern Sweden.

I've had my head shaved a few times since. These other times it has been to mark a significant change in my life. And then, in a sort of paradoxical move, I covered my head with colorful, crocheted beanies. I realize now that I have it shaved for myself, but I'm not always sure I want others to see it. It is fine for men to shave their heads, but it can be seen as antisocial for a woman to be so boldly, baldly naked. And I don't necessarily have the iconoclastic courage to be that visible in the ordinary world.

Hair. The Bible calls it a woman's glory. When she gets married, a Hassidic woman's head is shaved, and after that she wears a wig. In the 60s and 70s long hair, especially on men, became a symbol of revolution, of the "make love, not war" ethos. The musical Hair reflected those values, portraying the hippie counter-culture and anti-war movement. There is a way we are identified with our hair, with what we choose to do with it and with things that happen to our hair outside our control. In times of transition people often do something different with their hair. Many women find losing their hair traumatic when they undergo chemotherapy. Sometimes friends and family get shaved in solidarity with a cancer patient. Some men, when they go bald, choose to get hair implants. Others choose a full shave. When I had a black partner, I learned a lot about how different the care of black hair is from white hair, including how it's cut. I learned that by doing such a bad job of cutting my partner's hair until I learned how from a black barber. The purpose of shaving our heads at the meditation school was to give us a more powerful experience of energy through the crown chakra.

My most recent, near shave on Tuesday was a practical matter. I just couldn't stand the lumpy, shaggy look anymore. But it also gave me pause to reflect. In the aftermath, I've been enjoying running my hand over the stubble. I giggle when I notice how different a shower feels when water lands between these tiny upright spikes. Hair.

Had to laugh when you mentioned the lumps and humps caused by cowlicks in your hair. My many cowlicks I’ll behave only when cut to a certain length. This sheltering place has allowed my cowlicks to run wild and free!

You are a better person than I, Terri. Too vain to allow my cowlicks free rein!

Anna, I can remember some of my hair times. When I knew I would probably loose my hair some friends and I had a head shaving party so I would not have to go through the agony of seeing my hair disappear in chunks. I never have regretted making that decision. Since then I have participated in two head shaving parties due to cancer. I will be glad when the State of Kansas opens up to beauticians in order to get a hair cut. Until then I will let it grow and not feel vain. I do the best I can especially since I still do not have full use of my left arm from surgery so it just due the best I can. Exercise! Exercise! Exercise!

Thanks for sharing about your head-shaving parties, Cheryl. I'm so glad you were able to turn something difficult into something fun for you and later fun for others!