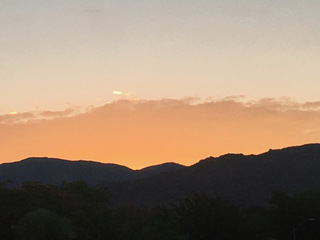 My favorite sound of all is this. Quiet.

To illustrate: I have owned my present vehicle for a year and four months and have yet to learn how to operate the complicated radio or use the sound system in any way. And I have used my RAV4 for two lengthy and several shorter road trips. One of the ways my daughter is very unlike me is that she almost always has something to listen to while she works, cooks, drives, takes a bath—pretty much for every activity.

It can be argued that we don't see with our ears, but I'm certain I see more and better in the quiet than when there is noise going on—whether it's the noise of conversation, music, or a sound book. This is in part because I'm a One Thing At A Time woman. I'm not able to focus well on more than one thing at once. And when I'm driving, I want to take deep note of the sights around me. It's one reason I drive the back roads instead of the interstates as often as I can.

When I drafted this piece, we were in the season of colors—crimson, gold, copper, rust, platinum, and still some greens to set off the richness of fall. Next to these are the red barns and the weathered, abandoned outbuildings, which I love even more than the brilliance. I am a woman drawn to the subtler themes. I relish lines as much as colors. Now the golden cornstalks have been razed and the fall plowing begun, so the colors are varied browns––beige, peat, some ochre. But the lines of the hills themselves and the traces left by the columbines and the plows are a work of art. All this I see so much more fully in the quiet.

There are different kinds of quiet. When I studied at the Scandinavian Yoga and Meditation School, I spent more than three months in silence, a little over a month, each of three times. But the silence was not complete. Our voices were not to be used to communicate, but we chanted and sang, the teachers and school staff talked to each other and to us students to give us instructions and assign karma yoga. Music might be piped into the dining room during a meal sometimes. Silence in this context is what I would call spiritual practice, though I know my teacher, Swami Janankananda, might or might not identify it as spiritual. Many inner things can happen, transformation can happen, and personal demons may be confronted during that kind of silence. In certain meditations there is utter silence, so if there is a slight rustle of movement, the instructor will say (breaking the silence further), "No moving."

But quiet. Maybe it's not quite the same as silence. I want quiet when I'm writing, but I also welcome now and then the woodpecker's hammering, the blue jay's scold, the wind whipping by. But mostly quiet is what I need. A person at the other end of the house can be making no audible sound that reaches my end, and yet I feel the noise of another being, their energy in my space.

I feel for my writing friends who are surrounded by the noise of their ever-present children during quarantine. Because what quiet may mean most is peace. And, much as those small beings are cherished, their presence does not, most of the time, bring with it the peace of quiet.

The word quiet was brought to you by Jody Keisner, herself a writer and professor with children at home, all trying to survive and thrive during quarantine.

Hi Anna... I am a bit different than you but I suppose it is because I have been responsible for children most of my life and one thing I have learned is that when it is quiet, chances are something bad is happening. I also can not sleep in total silence because for much of my Life I have cared for the dying and silence often means death. My most creative times have been during a crisis and the few times I have tried to escape the noise, just to be able to write, I sit staring blankly at the computer. Although I have been told that I do snore at night, I sleep very lightly, should someone need me. Last night they came to my room with one of the boys at half-past midnight. He had been fishing earlier in the day and had a hook in his pocket which evidently got into his bed somehow and when he rolled over it, it went through his lower lip... at least that is what they told me. Fortunately, I had a wire cutter to cut the barbed end off.

Thanks for your comment, which made me smile, Wayne. I think our difference may be more than situational, as I've spent many years in classrooms with children of all ages and still find quiet most conducive to my work. Cheyenne, on the other hand works best with sound surrounding her. So perhaps your situation, surrounded as you are all the time by children in your care, but also perhaps personality or personal preference. I know writers who like to work in coffee shops, but I get almost nothing done, unless I'm simply journaling. I'm glad you had those wire cutters handy for that middle-of-the night emergency. Still a medical man!

Quiet is difficult to find. Almost impossible! Perhaps noise-cancelling headphones are the answer. I, too, can feel the presents of another person or animal in the house even when no particular sounds are being made. I especially love being in a forest alone, off the beaten path where quiet can be found in-between the sounds of nature. I just don't get there often enough. I try to tune out a good bit of collateral noise, sometimes more successful than others. I would enjoy more quiet in my life....something to investigate!

Thanks for your comment, Shelley. I agree that quiet can be hard to find and there are certainly different qualities of quiet. Happy investigating!