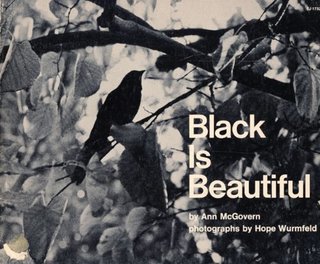 Black. So much power, such varied power, in the word and the images and reactions it evokes.

My first teaching job was with third graders on the edge of the Navajo Nation. There were three brothers in the class, and the oldest, Benny, had dark brown skin. Some of the other children, when they thought I wasn't listening or didn't understand, called him Zhínii, the Navajo word for African Americans. It was pejorative, and the act was bullying. I witnessed Benny's hurt from day to day.

My partner at the time was a Black woman, and we talked about how I could intervene. She suggested I read the class a 1969 picture book, Black Is Beautiful. Each page displayed a beautiful B&W photograph of something black—a blackbird, black puppies, black jelly beans, a young Black girl in dress-up, a black butterfly. Accompanying the photos were short poems about the beauty of these things.

I thought it was a good idea, a way to start a conversation with the class. I always read to them after lunch, sitting on a stool made of an upturned bucket fastened to three wooden legs. I began reading, but a few pages in someone began sobbing––Benny. I knew immediately that this had been the wrong strategy. I stopped reading and put the book down. I decided that what I needed to do was lay down the law. "Black is beautiful," I said. "Everyone who is Black is beautiful. But Benny is not Black. He is Navajo, like most of the rest of you. He is brown and beautiful. If he were Black that would be beautiful, too. But he's not. And you may not call him Zhínii. It's a mean name, and it has to stop. You are not allowed to use it." I never heard it again, which doesn't mean it never happened other places.

A few days later, Benny and some other kids hung out in the classroom after school, which they did often because they were boarding students. Benny came over to my desk and stood next to me, chatting about ... just stuff. Then I noticed that he was leaning into me, resting against me while he talked.

I look back at so many incidents of my teaching career, even some of the later ones and think about what I could've done differently. I ask myself why I have so many better ideas now than I did then. There were so many teachable moments I missed. I think about how much more I might have helped those students understand about prejudice, racism, bullying, kindness, acceptance.

Black. A word that evokes baseless fear. The color given to death and mourning in the Euro-American world. The color of conscience. The color of restfulness. Of power. Of velvety softness. Of beauty. Black is beautiful. Black is.

The word black was brought to Words from Friends by Wayne Dale Matthysse. who is the cofounder of Partners in Compassion and has been a father to the fatherless in New Mexico, Honduras, and now Cambodia at Wat Opot Children's Community .

Thanks for posting this Anna… your reference to the edge of the Navajo Nation and your partner, who was also my partner at the Ford Canyon Youth Center, brought back so many memories, both good and bad, of a time when our journeys were just starting. I like what you did with the word BLACK, showing both the positive aspects of the word along with the more negative. I don’t always see the positive side of it although I will agree that it can be beautiful but, on me, it doesn’t wear well… however, that may be more because of my shape and not the fault of the color.

I began wearing only black several years ago when a journalist for the Detroit Free press published an interview he had with me about my work in Cambodia. I did wear black quite often back then and always did so when I met him… and so he assumed that I did so always because of my antiwar views. After reading the article I decided not to make him a liar and made it my statement against war and poverty. I vowed never to wear another color until there was peace in the world. I did switch to White and shaved my head and beard in 2008 on the day Obama won the election. I gave him one year to make some changes but reverted back to black late in 2009 when it was obvious peace was still a long way off.

Most people now just assume I like black and few of them really know the reason behind it. That is not a problem for me, however, because it is really meant only to be a personal reminder of the eleven Marines who gave away their position so that I could be medivacked out of a war zone and into safety, while they were being overrun by enemy soldiers. They were all dead by the time I reached the field hospital.

Thank you, Wayne. I almost wrote about you wearing black and switching to white after Obama's election. You surprised me in the hotel lobby in 2008, because I expected to see you in black. Wearing it now is a good reminder of the sacrifice made for your life. I believe it is blessed in the memory of those Marine's is blessed in the life you now live.