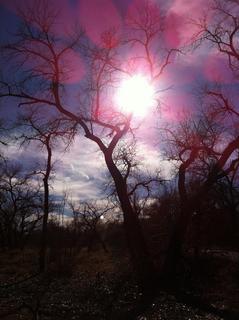 I'd like to think it was sometime in childhood that it occurred to me to wonder: "When I see a field that I call 'green,' and you see the same field and also call it 'green,' are we actually seeing the same color? Or have we just agreed on a common name for a color we both see quite differently?" That pondering would end with the realization that we could never truly know what it is that each other sees.

As I said, I'd like to think it was in childhood, and I know it was fairly early in life, but it's quite unlikely that it happened in my earliest years. Here's why: I was raised in a tight-knit system in which there was literally One Reality. That reality existed in the Bible, and the interpretation I was exposed to was not interpretation; it was literal Reality. It was impossible to conceive of anything existing outside it.

I probably still lived in the embrasure of that reality when I first entertained that speculation about how we each see colors. Little did I know then that what my mind was exploring was the possibility of different and many realities. In fact, it's probably strange that we use the word "reality," since there are so many varieties of experience, so many angles from which to see what we think of as reality.

One of Cheyenne's uncles was schizophrenic, and once when I was walking across Copenhagen, deeply engaged in conversation with him, I nearly walked into busy traffic. Michael put out his arm to hold me back. Which of us was more aware of reality?

And then there's science, which is touted as a paragon of reality and objectivity. Science is no more objective than the people conducting it. Scientists searching for a particular outcome, a certain cure, often, and not maliciously, come up with results that are later shown to be inaccurate or even false. It's important to know what entity funded scientific research because sometimes the source of funding leads to biased results. Even in science there are different realities.

I sometimes think of reality as what we see through a kaleidoscope—ever shifting, many faceted, lavish with color and shape. The magnificence of many realities.

The word reality is brought to you in WORDS FROM FRIENDS by Mirakhel Windsong, whom I got to know, though not well, during my last time of living in Gallup.

Interesting topic, especially in today's world. I grew up in the same Biblical reality as you did, Anna, and to be quite honest, I sometimes miss that good old-time religion, when Jesus was the answer to everything. My reality today as an antitheist, however, is not so secure and even though the soon to be released government disclosure on the existence of extraterrestrials will possibly prove I am right, I am not so sure how I will react, let alone the rest of humanity, to a new reality that we are not alone in the Universe and that everything we have been taught about Life was a lie.

Thanks, Wayne. I resonate with how you identify, as an antitheist, and I would say that it describes me, although I'd like to find a more positive term, not really wanting to identify as against something. What the term means to me is that what we've called "God" is not a person but Love, or as you say, Life. I haven't thought for a long time that it makes sense to think we are alone in the Universe. I have some difficulty agreeing with your comment that everything we've been taught about Life is a lie, just because I'm not comfortable with absolutes. I think we've been taught a lot about Life and living that is useful and true (lowercase T). I appreciate that you're always thinking and growing.

I love this post, ASR! It contains such an important reminder that nothing is absolute. Wait, was that an absolute statement? Uh-oh!

Haha, Catherine! Something you and I have come back to time and again! Thanks for commenting.

I had similar questions as a kid but was terrified of them because I had been assured that all such thoughts were “demonic” and evil. I wonder how my life would have developed had I been allowed to question with an open heart and open mind. Now I find the sense of not knowing as a humbling motivator to seek and discover life itself.

I'm sorry those lively thoughts were so terrifying for you, Paolo. I wish you joy of exploring them now.