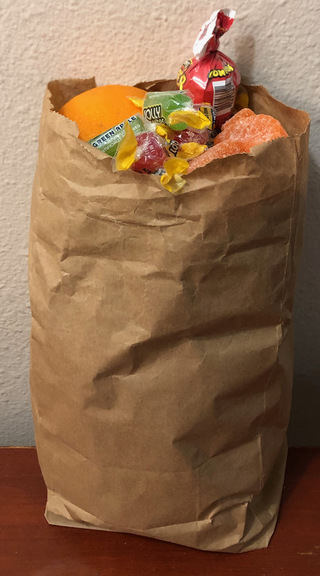 It was Christmastime, but the red earth was dry, and I rode with my father in the dark green, 1953, Chevrolet mission pickup, the long floor-gearshift between my knees. We took a two-track, dirt road all the way, perhaps thirty miles, from Teec Nos Pos to Aneth, which lies in the small Utah corner of the Navajo Nation. My father drove there every week to give what they called "religious instruction" to the elementary students in the Bureau of Indian Affairs (BIA, now BIE) school. It would be the first and last time that I visited the little stone and pine viga school that was almost identical to the one I had attended in Teec Nos Pos.

This time my father would tell the Christmas story, and on the bench seat beside me in the truck sat a cardboard box filled with small brown paper sacks. They were filled with striped hard candies shaped like waves and rectangles, with red and green, yellow and white and purple gumdrops. There were peanuts in their shells, a candy cane, and an orange. Year after year these bags would appear at Christmastime, and there was always an orange.


When he was done telling the story, my father let me pass the bags out to the children. I was no older than most of them. Why should it be me and not some of them who got to give out candy? What was my father thinking when he gave me this task of apparent largesse? What did the children think as I handed each one a bag? I know from some of my friends, now that we're adults, that they probably thought nothing––that I was someone of no consequence in their lives. Their lives were about longing for home, being punished if they dared to speak the only language they knew––their school lives of harsh deprivation both physical and emotional. Maybe they thought about the contents of the bags, hoping they might contain something different from the ones the Mormons and Catholics and the government school itself had passed out a few days earlier. Maybe they were thinking about going home soon, the only time in nine months they would see their families. Maybe they thought about squirreling away all four bags of treats to bring back home and share.


And what was I thinking? Probably not much. It seemed natural that my father would tell me to do this. Perhaps I'd been part of an assembly line that filled the bags. Maybe I felt generous or imagined how generous the other kids might think I was, though the bags didn't come from me. Maybe I was self-conscious. Maybe there were no thoughts; I was just doing one of the tasks that fell to me as a missionary kid, part of something I had been taught and believed with all my heart was a sacred calling.


Whatever thoughts the Aneth school children had, whatever thoughts I had, two images from this event have stayed with me. The first is a deep, narrow ravine our truck crossed and, whether or not he actually said it, some words from my father about how the truck might have difficulty getting down and up the other side. Or perhaps that was my fear, since this was a route my father took every week. The second is just a moving picture of me, a little white girl, being part of the putative missionary largesse.

An orange, always an orange. The orange was, maybe still is, the ubiquitous Christmas gift in Dutch ethnic homes.
I remember receiving the bags of candy, those awful ribbon things, candy canes, chocolates and an orange after the Christmas Sunday School program each year. What would a Navajo family have given instead?

That's an interesting question, Doug. Of course, before the coming of white missionaries, there wasn't a celebration of Christmas. And we know that the Christians appropriated this celebration from pagan festivals at Solstice. But your question points to what happens when cultures collide, sometimes crashing, sometimes dovetailing, which is a lot of what these posts and my book will be about. Thanks so much for commenting!

Anna, your writing is deeply moving, and so “you”as I remember you, just riper. How pleased I am to see you still committed to your true love! I am riper too, in all ways! So much of my personal growth is due to knowing you.

I have been wondering what you have been up to – I did guess a book, but beyond that I had no inkling of what direction it might take because why would I. I can see you have a lot to share with us, your readers. Although this particular experience in Aneth is pretty unique, it drives home the fact that as children, we simply accept without question so many experiences in our lives which later on we are forced to deal with if we can and if we want to. I think your new memoir will be a good vehicle for doing just that.

What a big and lovely surprise to hear from you, Beverly! I can't help wondering how in the world you found me here and now. Thank you for your kind words about my writing and about what our friendship has meant to you. I would love to catch up, if you'd like that. Perhaps you'd use the contact tab on the website, and I can then email you back. Blessings!

So nice to hear from you, Paula, as always. Yes, I have gone dark for a while, figuring some things out, and I'm glad to be back in touch. You have pinpointed what much of my new book is about––how life is just life to a child, and then in adulthood we have the opportunity and sometimes the need to make sense of what it brought us. Although the circumstances of my childhood were unusual for a white US-er, that phenomenon you mention is universal. Thanks for commenting.