10 REASONS TO BUY THE NEW AUDIOBOOK 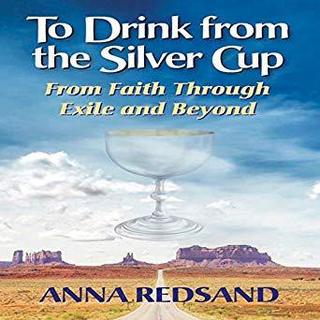 To Drink from the Silver Cup Audio Book

10 Reasons why you might want to order the audio version of To Drink from the Silver Cup:

1. You commute to work every day and need something engaging to listen to.

2. You're planning a road trip and love to listen to something stimulating while you drive.

3. Reading with your eyes is a challenge for whatever reason.

4. You just prefer listening to books rather than reading with your eyes.

5. It's read by me, the author, and everyone I talk to says that's the best–when the author reads her own work.

6. After readings many people have commented that hearing me read passages they've already read is a completely different experience–in a good way. So listening to the book will be a new experience.

7. You've read the book twice and can't wait to hear it (I know at least two people like this).

8. You want to give it someone who only listens to books.

9. You want to listen to it, and you want to support me, the author.

10. You don't usually listen to books because, like me, you like to read them with your eyes, but you still want to support me, the author.

11. Bonus reason: A teenager came to one of my readings. Afterwards she told her grandmother, "I could listen to her read even a technical manual for hours." True story.

I hope you will buy the audiobook and enjoy it to the full. Some people already have. To buy, click To Drink from the Silver Cup Audio Book. You can listen to the sample reading here, if you're not sure.

I love your reasoning!!

I listened to the sample and it is very powerful hearing you read your story. I'm thrilled to get on I tunes and purchase!

Aw, thanks, Janet! Great to get your feedback about the sample! And I'm jazzed that you're going to buy it. We even know how to do it on iTunes! Lovely to see you Wednesday. 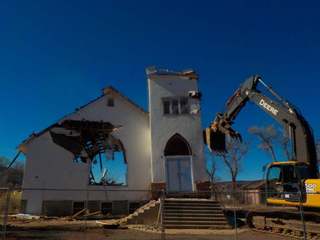 I knew the Rehoboth Christian Reformed Church was slated to come down one of these days, but a shock went through me when my photographer friend Ted posted pictures of the demolition. I watched the walls tumble and with them memories came tumbling in, not in any sort of order, a stone here, a chunk of nostalgia there–like the building itself as it fell to earth.

When I was eight years old, I entered for the first time a space that seemed so large. I was a boarding student  then, with my stomach never coming unknotted, hands and feet always cold–a stranger, intruder even, never feeling at home. A place so different from the embrace of the little clapboard chapel at Teec Nos Pos.

In the Rehoboth church we practiced for a musical that long, tall, old Miss Stob must have adapted for us from a 1930s score.

We marched over from the high school next door for chapel on Tuesdays and Thursdays, choir practice on the other three days.

I held hands there with my girlfriend under the protection of our skirts and choir robes.

I listened (or not) to the interminable prayer, the Congregational Prayer, the one that must last for the prescribed twenty minutes, the one you could measure by the clock if you stealthily opened your eyes.

I sang a duet, "Bring a Torch, Jeanette, Isabella," in chapel service with Irma Ahasteen,  just before Christmas vacation.

There was our senior dramatic reading, "An Evening with Robert Frost." Unable ever to forget the lines from "The Death of the Hired Man:"

Home is the place where, when you have to go there,
They have to take you in.

I should have called it
Something you somehow haven't to deserve.

Weddings: Ted and Evie, Ray and Marge, Sharon and Ken, Flo and Stu–Evie and Sharon were nurses I worked with in the old, old hospital, the one that fell years before the church. By happenstance I witnessed its demise. Ted and Ray and Marge, Flo and Stu, all students ahead of me in school. Seeming like royalty when they married.

Introducing the idea of theistic evolution in Young Peoples' Class in the church basement. Clueless about how radical that was.

The funeral of a first-grade girl when I taught at the mission. The minister saying her life was like a Navajo rug–complete, even though it was very small. Sitting in the pew with my third grade class, not knowing I should talk to them about what her death might mean to them. Still so young myself.

My girlfriend and I interrupting brass practice to decide whether to kiss on the lips. Going back to practicing, no first kiss in the Rehoboth Church, there where anyone might open the swinging doors at any moment.

Golden light, the smell of newly washed sage and earth, breezing in through open windows on a Sunday evening during monsoon season.

Being carried out the church doors on glorious waves of J.S. Bach.

Grabbed by the house parent, yelled at right after church because a Navajo boy and I dared to enter church and sit together at Sunday night service.

The communion I took when I feared I was losing it all.

My friend Louise delivering her mother's eulogy in the Diné language, not one single word of English. Feeling so proud of her.

A dream where I am leading the church service. A dream that will never come to pass. Not literally. Not now.

Some churches seem to hold in them the memories of all the silent and voiced requests lifted there to the Holy One. A palpable energy in those places that my young friend Ben named. "There's something in there," he said at three years old when we left St. Paul's Cathedral in San Francisco's Mission District. I never felt that at Rehoboth. There was an emptiness there for me. And yet, when I saw the image of the church falling, I felt it as one more loss. For more than sixty years, it had been a vessel for my memories.

I connect to your memories, Anna. This led me to take time to purposely remember important places of my own past.

Thanks for your comment, Cor. I'm glad you enjoyed reading and even more that the piece inspired.

It seems you took me on a tour of Rehoboth. I eagerly read your memories and words as you captured feelings, events, and your life so deeply.

Thank you, Janet for always being such a great support. I often think of the real tour you and I took of Rehoboth that time you visited me at the cabin. It was pretty special.