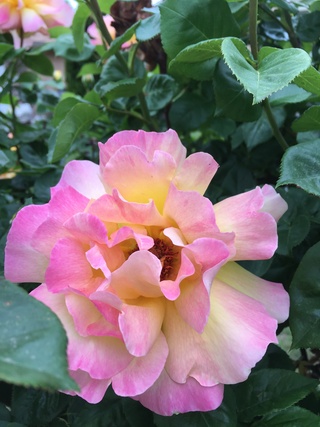 This blog entry first appeared in the Gallup Independent as a Spiritual Perspectives Column on the Saturday before Easter, April 20, 2019. It is reprinted here with permission.

In a church meeting, I once raised a question that I've thought a lot about but haven't yet found an answer for, except through use of my imagination. The question? "Just how did the disciples, and other people who'd known Jesus in the flesh, talk about him in such a way that so many people were drawn to him and drawn to following his teachings and his way of life? And how did the people that wrote about him later, write in a way that attracted people for the next two thousand years? I want to know."

One woman in the meeting had no need to need to ponder my question. She answered immediately, "It's because he rose from the dead!"

I was taken aback because it seemed she'd missed the point of my question. I went a little further, "Yes, but how did Jesus' followers talk about the resurrection in a way that caused people to believe it had actually happened? I mean, resurrection isn't exactly believable." The woman didn't have an easy answer for that. No one else did either.

In one of my favorite novels about the time of Jesus—The Robe by Lloyd C. Douglas—the main character is the centurion who won Jesus' robe in a game of chance at the foot of the cross. Marcellus leaves Israel after that, deeply disturbed by all that he's experienced. Later he returns to try to make sense of his encounter by learning all he can about Jesus' life and about the new sect that wasn't yet called Christianity. He is attracted to Jesus' teachings, but when a friend hesitantly begins to tell him about the resurrection, Marcellus starts to freak out. "No. No!" he says. He doesn't want to believe what Justin is telling him because believing that the man whose death he witnessed is now alive requires a willing suspension of disbelief. He's not ready for that.

Actually, I learned from my nephew Noah, while he was still in seminary, that in the time of Jesus, people like Marcellus probably didn't have so much trouble believing that someone could come back from the dead. Noah told me it was an age when people easily believed in miracles, expected them even, especially from charismatic leaders.

The late Pulitzer Prize-winning poet, Mary Oliver, tells how she was sent to Sunday school as a child but had trouble with the resurrection, so she never joined the church. Nevertheless, she remained very interested in spirituality and felt that spirituality is something essential that adds to our lives. Much of her poetry is profoundly spiritual despite the trouble she has accepting the resurrection as factual.

Now here we are again, at the time of year when Christians celebrate Jesus' resurrection with Easter. In my book, To Drink from the Silver Cup, I tell how, after forty years of self-exile from church, I sought and found Christian community. Though I'd joined a church, I didn't attend on the first Easter. Nor the second one. It wasn't because I found it so hard to believe that the resurrection could have happened. I had read in Yogananda's book Autobiography of a Yogi about a yoga practitioner who purportedly rose from the dead. There are several accounts in the Bible about people being revived after dying. I had read D. H. Lawrence's explanation for the resurrection in The Man Who Died. I had experienced ordinary miracles in my own life and possibly some extraordinary ones. I skipped services on Easter Sunday because of how the resurrection is tied to another Christian belief—namely the idea that Jesus had to die to save us from our sins—something I no longer believe.

My third Easter after becoming part of a Christian community, I bravely but not without trepidation, took myself to church. The pastor read these words from the book of Matthew, chapter 28, which takes place sometime after the story of the resurrection: "Then the eleven disciples went to Galilee, to the mountain where Jesus had told them to go. When they saw him, they worshiped him; but some doubted."

The preacher then gave me the takeaway of the year. He said, "Some of us believe without a doubt. Some of us are doubters. But we don't throw the doubters under the bus."

I did a spontaneous fist pump and in an audible whisper said, "Yes!" I readily confess to being a frequent doubter. Many of us are. Yet, like Mary Oliver, we continue to pursue a life of the spirit. It is my contention that only those who doubt have need of faith.

Yes, Anna, I agree...the doubters, I believe, doubt in the process of magnifying and evolving their faith. I too read The Robe at an impressionable age...since I can't recall much of it, apparently it made no great impression; however, I do recall liking it. When I studied The Course in Miracles my teacher suggested that the central message of Christianity is the Resurrection, not the Crucifixion--she said the Crucifixion was merely the vehicle to allow the people of the time to know that there had been a physical death. The resurrection aftermath was to bring awareness to the concept that life transcends death and that when all people have reached a point of ultimate Higher Truth/Higher Consciousness/Nirvana there will be no more need for the wheel of suffering, negative energies, pain...it's a welcoming concept for me. The Soledad Crucifixion is an interesting book for contemplating the concept of "resurrection" and leaves readers questioning, "What really happened at the end?" Thank you for your post.

Thank you for your thoughtful comment, Mirakhel. I do think the resurrection is more central than the crucifixion. I have also thought of it as showing that love overcomes death. I'll check out The Soledad Crucifixion.

Ken and I just watched Higher Ground. It was his first time getting a clearer sense of what it is like being immersed in dogma. This blog post reminds me of the importance and value of doubt. It is, after all, the birthplace of sincere belief.

What an excellent way of putting it--doubt as "the birthplace of sincere belief." I guess I would add that if doubt is followed by deep searching it can yield that belief. Not everyone who doubts goes further and searches.

A happy birthday to my big sister, one of the deepest and most daring thinkers I have been privileged to know!

Without doubt we are left with certainty which leaves no room for faith...in other words, what Paolo said.

Thank you, Rick, for birthday wishes and for the high compliment and for your thoughts about doubt and faith.