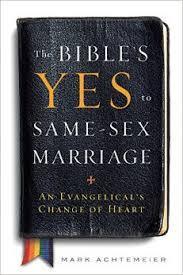 HOW A PASTOR CHANGED HIS MIND

It's ironic to me that Mark Achtemeier’s book, which details a careful and transformative theological study, indirectly supports my departure from church in 1973 as the healthiest move I could have made at the time. I say this because Achtemeier opens The Bible’s Yes with the story of a young lesbian seminarian, whom he calls Kristi. Her story became the impetus for his study. When Kristi talked with him, she was desperately trying to live according to the Church’s traditionally accepted views of homosexuality—either she should change her orientation (impossible) or be celibate. She was deeply depressed, questioning her calling to ministry, and had begun to consider suicide. To his surprise, Achtemeier witnessed that when Kristi decided with the support of other LGBTQ seminarians that she could live her life as herself, she blossomed spiritually and emotionally.

Had I remained in the church of my youth, trying to live according to the Church’s teachings on homosexuality and having already attempted suicide twice, I can only guess Read More
Post a comment