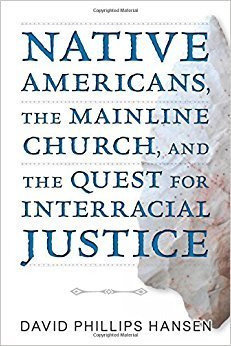 This review was published in the June 2016 issue of Evangelicals for Social Action. Published here with permission.

Recognition, Responsibility, Reconstruction, Reparation:
A Review of Native Americans, the Mainline Church, and the Quest for Interracial Justice


A rectangular pit lined with dressed stones stands on a low hill in Toadlena, New Mexico, near the center of the Navajo Nation. The pit comprises the basement and foundation of what had, years earlier, been my missionary family’s home. The pit is half-filled with charred timbers, a bathtub, a sink, and the rusted remains of a coal furnace. Sometime after my family moved away, the house burned to the ground. Investigators said the fire was started intentionally. It wasn’t the first time. Two other houses we had lived in had fallen to arson, never while my family lived in them, but when missionaries who followed my father did. I have always wondered if these events were pained attempts to redress wrongs—cultural genocide aided and abetted by missionaries’ actions in a land that did not belong to us.

It was from this context and its many implications that, as I read David Phillips Hansen’s Native Americans, the Mainline Church, and the Quest for Interracial Justice, I flagged lines and paragraphs in the book until its text block looked like Read More
6 Comments

Thank you for flagging this resource with such depth of attention. I sit with you in "wondering how we might extend reconstruction and reparation in the LOCAL context as well as within the denomination." I tend to think questions, our questions, can lead us into differently perceived ways of doing and being. May I also say, our questions need attentive discernment.

It has been over thirty years since leaving New Mexico and the Navajo people… but it sounds like things are only getting worse with time. I have learned a lot about myself since leaving and at times wish I could return again but… this time to listen. The Native People have a right to feel cheated and I understand their desire to be reimbursed for broken treaties and unfulfilled promises. I wish that it were possible to undo the things that I did back than,,, to unsay the meaningless words I spoke with such conviction, in the arrogance of my youth… but time has no eraser.

While I was in Honduras, I knew a man with Multiple Sclerosis. He use to sit in the doorway of a business across from my hotel and I assumed he was just resting there from a hard day working the streets. One evening as I was returning to my room, I saw him scrunched in the doorway and seeing that it was going to rain soon, I thought I would give him $5.00, so that he could go home early. He smiled but pushed the money away as he said,” Thank you very much for the offer but I don’t need your money. I work here at this office as a watchman and they pay me well. I can understand how you might have thought I was a beggar, you are not the first one to do so, I can assure you. I hope you are not offended by my refusal to take your money… it was very kind of you to offer.”

I did feel foolish at first for making the mistake, but his acknowledgement of my good intentions relieved my inhibition and we were able to form a positive relationship, which turned into a mutual respect for each other.

I don’t have a solution for the problems on the mission field, however… perhaps if the Native American leaders were to acknowledge that those of us who talked down to them in the past, who took their children away from their homes and put them in boarding schools, who washed their mouths out with soap for not speaking English, and who tried converted them to a western religion… did so out of ignorance, but an ignorance based on love and concern. Perhaps if they stopped demanding recompense for the past and instead acknowledged the good intentions of those who served, the relationships could begin to improve, opening the door for a mutual respect for each other.

Thank you for your comment and your interest, Kathy. I'm not sure I understand your sentence, "...our questions can lead us into differently perceived ways of doing and being." Can you clarify?

Wayne, thank you for your thoughtful comment and for sharing some of your own story in missions. I found a contrast between your wish that you could return to New Mexico, but this time to listen, and the idea that it's the Native leaders who need to stop demanding recompense for the past. If we acknowledge that those of us with a history in missions need to listen, then I think our listening to the pain and whatever demands there are, must come first. If healing is to take place between the oppressed and the oppressor (I speak now from the experience of one who has been oppressed as a lesbian and a woman by the church), the ones in the role of oppressor are, in my opinion, obliged to listen to the pain and even to such demands. Also, I rarely hear the Native leaders "demand recompense." The author of this book is an Anglo preacher who is saying that recompense is necessary as part of healing, and I agree. I don't believe that it is the missionaries who need the salve of a recognition that their intentions were good; rather, those of us with mission history or actual mission activity need to be binding up the wounds of the injured. In doing so, the missionaries will also be healed.

In addition, I'm wondering how your suggestion fits with your belief that we need to hold people accountable for their wrongdoing rather than forgiving. I do believe there is a need for forgiveness in the case of damage done to Native people's, but as I am not Native, I need to focus on being accountable.

I see your point regarding the contrast in my last statement, Anna… perhaps I did not explain myself well enough. I used the story of the man with MS to show how when the oppressed , or in his case the supposed victim of a disease, learn to accept their situation, that situation no longer has power over them and they no longer see themselves as victims or as the oppressed. When I lived in New Mexico, I knew of several Tribal Elders and Medicine Men who did not need or want what I was offering because they were confident in their own belief system. I however, was not that confident in what I believed and for that reason stayed away from them, working instead with their children and youth, who were much easier to influence and convert my ignorant way of thinking… I regret that now because, had I listened to them then, I might have discovered much sooner that the path I was on was wrong.

When the Native Christian Leadership has fully accepted their situation, it will no longer see itself as the oppressed and they will be able to meet with the Mission Leaders as equals to work out a solution… unless of course they choose to remain dependent on the oppressive system that has overshadowed them all these years, in which case they will be doomed to a life of oppression. Restitution for past debts would help some, and I strongly support that, however, if the Native Leadership can not support itself financially, in a few years it will all fall apart… like the house you once lived in on the reservation.

If the Native Leadership, were to follow your lead Anna, in making their situation known on a personal level, perhaps there could be hope for their future… but I don’t see much chance of that happening, although I do read of some good things happening with Indian youth rekindling the fires of their ancestors. It would be nice to think that the ‘Borgdorffs’ of this world would follow your lead as well, and hold themselves accountable for past wrongdoings… but I see even less chance of that happening.

Thank you for this eloquent clarification, Wayne. I do believe things are changing. My responsibility, though, is not to point out the need for indigenous people to accept what is; that is up to them and perhaps not even what they need. Who am I to say? My responsibility is to accept my own obligation for conciliation and to share it with others who bear the legacy of being or having been oppressors.