WHERE THE DRAGONS ARE 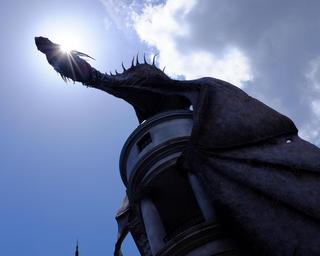 They are in the places where you never go. I'm not talking about pocket-sized dragons. I mean the big ones. The ones that make you shudder, the ones that dry out your mouth, make your stomach go cold, wound up in a tangled knot. Several times a day. Those dragons.

If you want to face your dragons (or quite possibly you don't), you will find them in a place unfamiliar––in the underground caverns of the mind, the freezing, barren peaks where it seems nothing can live. A place where the familiar no longer surrounds you.

Boarding school might have been my first such place, but I was too young to know what I was facing. You have to be able to look straight at your own reflection in the dragon's eye, and that requires some life experience, an ability to step outside all the feelings and then stare them down.

In my mid-thirties I entered the dragon's cave at the Scandinavian Yoga and Meditation School, in the dead of the dark Swedish winter. There for three rigorous months––34 days of silence, up at 3 a.m. to meditate, living with people I would never choose, building stairs of stone, cutting the rot from mounds of carrots in the dank root cellar until I couldn't feel my fingers, no reading, no writing––and the dragons swooped in. The steel-gray one, thin as a snake named Utterly Alone; the great red one, Obsession that assails me still; the one with green eyes, one that maybe you've met. Deprived of words and instructed not to communicate with hands or eyes––this and all things unfamiliar brought forth the monsters.

The pandemic presented me with the most gargantuan dragon of all. Once again, it was a dearth of  human communion that introduced the flapping wings, the scaly, slithering tail. Every morning the beast appeared when first I opened my eyes. It flooded me with rushes of intense anxiety. Throughout the day it attacked, flying up from deep in my belly, wave upon wave of fear. In the sixth month of COVID, I managed to look the dragon in the eye. I heard its name: You Have No Control. In that moment I came to the realization that control is possibly the thing I want most in this life, and I had none. No control over how others responded to the virus––whether or not they wore masks, how close they came in the supermarket, where they had been or what they'd been doing before crossing my path. With the dragon's snout in my face, I couldn't get away from seeing how desperately I want control. Of everything. All the time. Everything near me and most especially the behavior, the actions, even the emotions of others. I saw my urge to control had little to do with masks or social distancing. It was about everything in my life, and it had always been that. It was an illusion to think I ever have any power over others. And I felt sick inside at how ugly it is to want that.

Of course, I'd known for a long time that I like to be in control. And we need to control some things sometimes. But I never saw the pervasiveness of the desire for it so sharply as in this time of isolation. In this strange place where all of us are living these days. I hadn't seen so starkly the hideousness of my urge or smelled the stench of its hot breath. Deprivation of the familiar at the yoga school led to awareness. Awareness, the first step to letting go––and now, a strange, rare gift of the deprivation attending the time of Corona.

And the next step? I think it's simple but not easy. I think dear old Ram Dass had it: "Be here now." And let go.

Have you been to the place where the dragons are in this time of Corona? Have you looked them in the eye? Have the dragons borne you a gift?

If you decide to comment (and I hope you do), please do it here on the website instead of or in addition to Facebook. It helps me to get your comments here! Thank you!

Thanks for writing again about a most interesting subject… strange how most of us writers now have all the time in the world to write, because of the restrictions the pandemic has put on us… yet now complain that we don’t have any. Wish there was a “Viagra” for writer's block.

I appreciate your sharing about some of your “Dragons”, I can personally attest to the accuracy of some of them you named. I too have dragon’s, believe it or not, that these restrictions are giving life to, although not necessarily the same one’s that you mentioned,

For religious people, of which there seem to be fewer of nowadays because so many are turning to cults like QAnon, it is reassuring to have the close-unmasked comfort of community. I miss that… and the loneliness that comes from being an island that is drifting further and further from the mainland, along with the fear that I may never get off from it is one of my “Dragons.”

I actually have it much better here in Cambodia than most people and unless there is a new outbreak of the virus that reaches the countryside, I am much safer here than almost anywhere else in the world. Still, the fact that there are heavy restrictions in place that prevent me from taking an out-of-country vacation, even a short one, makes me feel like a prisoner waiting to be sentenced.

Thank you for commenting here on the blog and on Facebook, Wayne. And for sharing my post. I think we all have dragons, as you have shared about your own, or we wouldn't need to be on the Planet any longer. That's just an opinion, of course. I'm glad you're in such a safe place, but I empathize with how much you'd like to get away, even if for a short visit. We are so used to being able to move when and where we want to. I had quite a bit of anxiety about the trip to move to Iowa, but it turned out well, as far as I can tell at this point (I mean in terms of the contagion. Thank you, Wayne, for your ongoing friendship. Love to you and the children.

I am in awe of the way you look the dragons in the eye, Anna. I've been thinking about some of my own dragons--the dragon of no voice, the dragon of It's Too Big For Me, among others.

Thank you for sharing your courage to look the dragons in the eye. I appreciate you, Catherine.

This is such a powerful piece of writing, Anna, and gives words to feelings most of us have had in the last six months, though we might not have felt them as deeply as you. I became overwhelmed at night, when the lights were out - then the fear of the unknown tormented me until I fell asleep. I am thankful that this nightly assault has lessened considerably over the months. Like most people, I am adapting to our situation. That is our gift, I guess, we are adaptable - to a point. One thing that has helped me immeasurably during the day is that I find great satisfaction in making things. It doesn't matter what horrific news is on the radio, there is a calmness to be found in snipping and sewing, drawing and gluing, moving pieces around until they are just right or even good enough. This has been a great solace to me and I hope others have found similar ways to keep the "dragons" at bay.

Thank you, Paula. I'm glad your nighttime fears are lessening their assault on you. And it's good to hear how "making things" assuages the dragons, too. My dragons have mostly slunk away for the moment, now that I have more in my bubble than just me. But I don't want to forget what I learned from them. Take care!

This was a very evocative essay, Anna. Kudos for stepping up to write it. My dragons will be familiar to you: everything I cannot control in my environment, the world, my family, the air I breathe. When I look at a map of all the burning around California, where I live, there is no direction that does not contain a fire. Unless I go out to sea. The map is in my mind all the time: Both constricting me and instructing me. Letting go of the illusion of control now. A long process.

Thank you, Linden. Our dragons are, as they say in Southeast Asia, "Same, same, but different." My heart goes out to you and all on the West Coast. Surely with those fires, any idea of control is an illusion. And, yes, letting go is a long, if not endless, process. Be safe.

Anna, I have been lamenting on your words and how you have faced your DRAGONS! I know I have Dragons or had Dragons that I thought were gone. Then there was an uproar of two of my dragons that have had to face during this pandemic. I didn't want to face them but I knew I had to look them in the eye or else I would end up in the black hole. There wasn't any way that I could let that happen since I had been in it many years ago. It was a real struggle but I overcame those DRAGONS and I feel so much better. It has been a long journey this year since January hasn't it?

Cheryl, thank you for taking the time to lament and for having the courage to face your dragons and come through to tell the tale. Yes, it has been a time that has fostered reflection, lamentation, and hopefully growth. It does sound as though that is your experience. Well done!