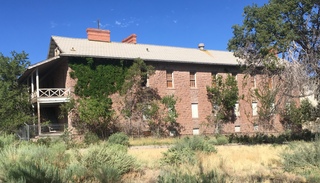 For the many-eth time, I passed the abandoned, old Ft. Wingate school, as I drove up to the Quaking Aspen Campground. I thought, This time I'm going to breach the fencing and go in and take pictures. The school was on the site of a fort originally named Ft. Fauntleroy, and it was where, in 1846, the Bear Springs (Shashbitó in the Diné language) Treaty was signed by Narbona and other Diné chiefs and Colonel Alexander Doniphan. In 1918, an ordnance depot for high explosives being returned from Europe after WWI was constructed two miles west of Fort Wingate. In 1925, the entire post moved to that location, and the original fort was turned into a vocational high school for Navajo students. That was the place I went to visit earlier this week. It's also a place with which I have some personal history. It turns out the location has been abandoned to a caretaker more than once: from 1910-14, from 1915-1918, and most recently in 2010. I did run into a caretaker as I was leaving the way I came in, where chain link fencing had been torn open by others. I waved to him, and he waved back, seemingly unconcerned by my presence.

I walked around the overgrown grounds snapping photos, mainly of stone institutional buildings, including the well known barracks of 1906, as well as an agricultural building with silos, the Depression Civilian Conservation Corp (CCC) era stone-and-viga elementary school that looks so much like the Department of the Interior Bureau of Indian Affairs (BIA) school I attended in Teec Nos Pos. It is a close cousin to schools built of dressed native stone all over the Navajo Nation.

I avoided taking pictures of the cinderblock classroom and dormitory buildings constructed in the 1950s and 60s and the long, metal warehouse-like ones because they have no aesthetic value. At least that's how I thought of my omission. On further reflection I realize that there may have been another, darker reason. One of those buildings, easily identified despite its boarded up windows and graffitied walls, holds my history with this place.

This is not a history I am proud of. In the process of colonizing indigenous peoples, governments have relied on the collaboration of religious entities. The old Ft. Wingate School was a US Government school (a new one still is). Missionaries across the breadth of Navajo Country had an agreement to provide religious instruction in the BIA schools one afternoon or evening a week and on Sundays. As the child of missionaries, when I was in high school, I was conscripted into the army of religious instructors. I went willingly every Tuesday evening to that cinderblock building at Ft. Wingate to tell Bible stories and sing gospel choruses with second grade girls.

Today I am vigorously opposed to proselytizing, which was part of my everyday life for so many years. I think if people are seeking a spiritual path and they see something in me that they're drawn to because of how I live my life, then great; I'm willing to share. Otherwise not. So I look back at my 15- and 16-year-old self, and I do the only thing I know to do: I forgive myself for not knowing better at the time. And I hope that if those little girls remember the time they spent with me at all, they remember me as kind and as a good storyteller.

I hope those little girls who listened to your stories and sang the gospel songs with you remember you as not only a good storyteller (which you still are!), but also as a good person. You did what you were told to do. We learn from our pasts, and we move on.

It seems this place, the architecture, the memories, even the overgrowth contain life memories for you, Anna. It takes courage, I think, to walk into places we remember are painful and full of regret. I hope most of your places contain good memories.

Thank you, Gail, for the blessing of your words.

Thanks, Cor, for your love and sensitivity.

I so agree with you Anna. " Today I am vigorously opposed to proselytizing." It was what we were taught as we started a church plant. But today I so realize the error if seeing oeople as projects. We live next to oeople if many different faiths and I listen and learn. Especially with the First Nations peoples I so appreciate learning from them the passionate and respectful care if the earth which we did not learn. I apologize Mother Earth, for the ways we have not cared for you.

Thanks so much, Connie, for telling me about our shared values. I'm grateful for how you see things now. I have to say, in my experience of some Native people here in the US, because of colonization, that respect for Mother Earth has been damaged but is being reclaimed by some. Decolonization is a long haul.