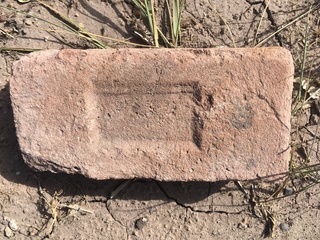 The brick that kept me searching

As my brother Rick and I sat by my campfire at Quaking Aspen, I mentioned that I planned to explore and take photos at the old Ft. Wingate school the next day. He told me there was a small cemetery to the east of the school and thought I might like to try to find it. He said it was a graveyard used to bury some of Pancho Villa's captured soldiers that had died in the 1918 influenza epidemic. So when I finished my photo shoot, I walked out on an overgrown, two-track dirt road that led east, outside the chain link fence but inside the gate across the asphalt road leading into the school.

I lost the road a couple of times and was about to give up my search as the morning grew hotter, but then I saw the altered brick (left) lying next to the road. I thought maybe it had been a makeshift grave marker. "I'll go a little farther, then," I said to myself. A few steps later I suddenly made out gray headstones and two rusty gates, wide enought to admit a hearse or wagon bearing coffins, in the distance.

I estimated there were around 70 standing gravestones and weathered wooden crosses within the sagging fence. Mysteriously, there were graves on the western and eastern ends of the cemetery, but the center appeared to be empty. There were ten stones on the western end. Four of them had obviously Navajo names with the date 1929, four years after the army post became a school, no birth dates. I wondered if these were students. It was all too common that Native students died in residential schools of heartbrokenness, exposure when trying to escape or disease brought on by both. The other six stones were marked "Unknown," but the stones were marble, so clearly someone had cared to bury the bodies well.

The graves on the eastern end of the cemetery were indeed those of Mexican soldiers, including a general. But an article by Harold L. James, published by the New Mexico State Highway Commission, indicates that they were not Pancho Villa's soldiers but Federalist loyalists seeking asylum from Villa's forces with their families. The US decided to remove them from anyplace near the Mexican border, in case there were Villa's men hidden among them. They were detained (2,000-4,000 of them from varying reports) in a tent city south of the army post. The soldiers had plain cement headstones, but the general merited a rather ornate plinth that rose above all the other stones in the cemetery. They were held from 1914-1915, so they did not die in the 1918 epidemic. I didn't learn any causes of their deaths.

Further research explained the mystery of the empty center of the graveyard: most US soldiers' remains were removed to the Santa Fe National Cemetery. There were two white marble gravestones of US soldiers from the WWII era, one clearly Navajo, who died in 1944 and the other who died in 1948. One wooden cross was kept freshly painted white with black lettering: a Navajo man, born in 1909 and died in 1983. His was the most recent grave in the yard, someone who had died old, so not a student at the time of death. I wondered who had decided to bury him here and why.

The cemetery was very overgrown, the latest grave the only one to be somewhat cared for. I felt a soberness, a sadness at the unknown stories. The likely students and the asylum seekers no doubt went to their graves with sorrow in their hearts.

To see photos from the graveyard, go to the Facebook search space and enter "Anna Redsand cemetery."

A state wide tie-in........the 4-5000 people in the tent city on Wingate in the post Pancho Villa event were sort of imprisoned for their own protection as they were not of the right politics for a return to Mexico, you will sometimes find they are at one time called prisoners and yet another time "refugees" due to the unpredictability of the changing governments of Mexico. Also it is important to know one aspect of the politics was to make the church in Mexico an "outlawed" institution........again New Mexico was necessary for the rescue of people of the cloth or otherwise religious individuals escaping Mexico. As a result the New Mexico Gov't /U.S. gov't allowed a diplomatically recognized area in New Mexico to be recognized as Mexico consulate status.....hence near Las Vegas at the old Montezuma Castle Hotel there were many priests and people of the cloth to find refuge there near Las Vegas for their own welfare as they remained Catholic in their beliefs.....something contrary to some forms of the surviving governments down in Mexico so that is why for a very long period they occupied the old hotel there for the duration until late 1960's or so. It had come to an end just as I started college there in 1970. Lesson is to have a value for our religious freedoms, one way or another.

Cemeteries are interesting. They can give a lot of interesting history or lead you on a chase for more information. I have a page in one of my albums of all the family gravestones on Whidbly Island. (Fircrest?).
There is also a page on FB called "Find a Grave."

Thanks for posting this Anna, it brings back so many memories. As you know I lived in the Fort Wingate community for several years and although I never saw the cemetery, I do remember the old barracks and other buildings.  Like you, I was a part of the proselytizing arm of the CRC and like you, I am now opposed to it… still, my intentions at the time were good and in looking back, I believe that my efforts were appreciated and helpful to many of the students who were searching for something more than what they were being given in the dorms or at home on the reservation. I had the good fortune of visiting Julia Ensing in the retirement village just before she died. We had a long talk about Rehoboth and she too had many regrets about how the students were treated in the dorms… yet concluded that the children she cared for, found in her something they didn’t see in many of the other missionaries. I left Gallup after the accidental death of one of our foster children… but that was just the final straw. Previous to that I was updating the files of the Ford Canyon Youth Center and recorded over 20 suicides of kids I had counseled. I felt I had failed… that what I was offering was not sufficient for their needs. I don’t know if I could do any better today, even though I am far less judgmental and more accepting of alternative views.… from what I hear, things haven’t changed much in Gallup or Fort Wingate and I can only hope that there are still some who haven’t given up and who are trying to be something more than a proselytizing missionary.

Thanks for the additional historical info, Victor.

Thanks, Bea. Your page on the family graves on Whidby must be interesting. I know one of my Grandma's (Gertrude Vander Pol Van Zwol) brothers died and was buried there, shortly after they immigrated in 1912. At least I think it was then. I have used "Find a Grave" before.

Thank you, Wayne, especially for sharing your pain. I do think there have been changes for the better--e.g., much higher employment of Native people in Gallup and in very responsible and prestigious positions (my dentist is a Navajo woman, for example). Also closure of drive-up liquor sales. But the suicide rate among Native youth is still very high, and there are many other problems, poverty being perhaps the greatest.